Members of Concerned Residents Section 14 Petaling Jaya placing banners in front of houses in Section 19 along Jalan Harapan to raise awareness of the issue.

Concerned Residents Section 14 Petaling Jaya pro-tem action committee are among those against the project.

“The relevant assemblymen and developer must consider residents’ views as this is in our interest.

“From our understanding, the proposed alignment raised at the state Economic Action Council (MTES) meeting is now being revised after an engagement with another group of residents.”

StarMetro sighted a letter dated Oct 4 from the project developer to the Jalan 14/1 to 14/15 Residents Association (RA), stating that they “accordingly wish to engage with key personnel from other residents associations in the vicinity on the proposed alignment”.

“When the state instructed the developers to engage with the residents, we expected a townhall session to be held. But the developer has been having informal meetings with a segment of residents.

“We feel this is misleading and want the details to be made public, ” said Sheikh Moqhtar. 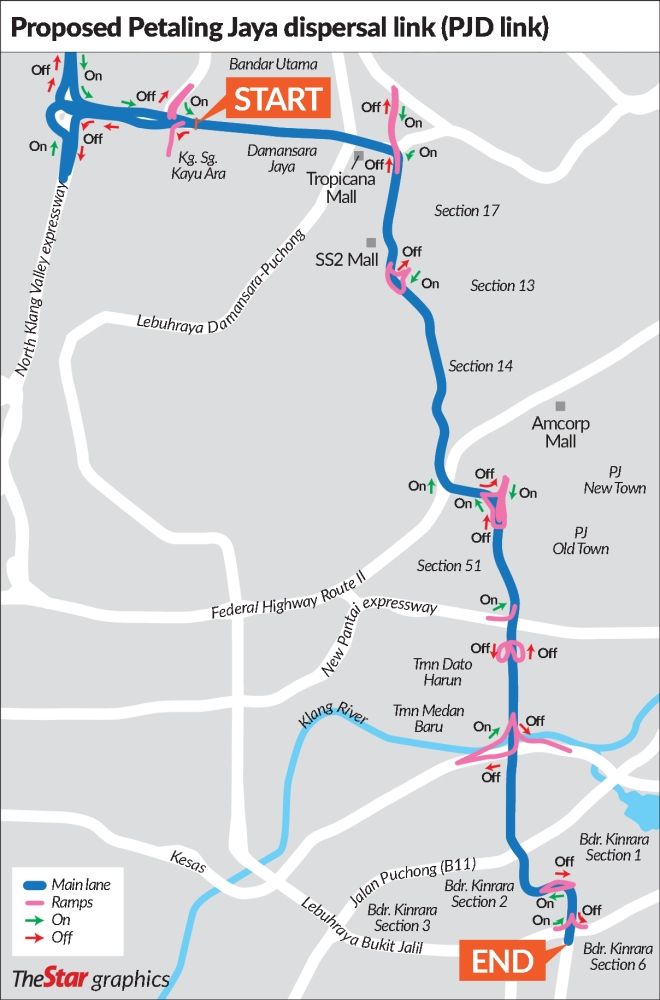 He said it was unfair to meet residents without a defined alignment or showing any of the environmental, traffic and social impact assessment reports.

“There should be better transparency in revealing the information.

“We feel the freedom to engage with residents gives the developer the upper hand and weakens our interest, as one group may not be representative of the views of all.

“The developer should not meet residents on a piecemeal basis but should instead take an en bloc approach by having a proper town hall for stakeholders to give their views, ” he added.

The pro-tem group also wrote to the state government to voice its objection.

The group questioned the state on the logic of putting forward the project when a similar plan to build a highway was objected to by former Selangor mentri besar Datuk Seri Mohamed Azmin Ali.

“The Kinrara-Damansara Expressway (Kidex) was cancelled in February 2015 by the then Mentri Besar for failing to meet certain conditions.

“Why is the highway plan in the form of PJD Link making a comeback after six years?” Sheikh Moqhtar questioned.

“The name appears different but if we look at the point-to-point alignment, there is only a sectional change in the Section 14 area, ” he said, referring to a 2016 map of the proposed Petaling Jaya Dispersal Link shared by residents which was said to be on a pamphlet distributed by the developers.

“In 2015, the then Mentri Besar instructed that the Kidex proposed plans not be considered when drafting the Selangor Structure 2035 plan.

“Our checks, however, reveal that it is still there although it is not in the local council’s plan.”

Sheikh Moqhtar said Petaling Jaya residents might not want the highway as it would change the landscape of seasoned parts in the city where many seniors were residing.

Section 52 resident K. Gerald, who lives at the Istara Condominium, said noise pollution had increased ever since the one-way-loop and other new developments cropped up in the surrounding area.

A highway project would inevitably compound the problem, he pointed out.

“We have been experiencing a lot of noise in the past few years.

“We do not know the alignment of the proposed project and it is unfair to keep residents in the dark. We need to know the route.

“We want to know how we will be affected by it, during construction and after it is built.

“Of course, I do not want any highway cutting through this peaceful and mature area.”

Gerald said the area surrounding Filem Negara, along Jalan Utara in Section 52, had been gazetted in the local plan for aged care services and that the authorities and highway developer must take these factors into consideration.

“You cannot have a highway cutting across an area where there are schools, hospitals and places of worship.

“I do not see how it will benefit anyone living here or visitors to this area, ” he added.

Section 19 resident Tan Yew Leong said he was shocked to find out that there was a new highway planned for Petaling Jaya.

“I thought this was over, ” he said, adding that he hoped the state government would keep its promise from six years ago, when Kidex was called off, of not building new highways in Petaling Jaya.

“When we learned that plans to build a highway were submitted again to the Selangor government, we decided to raise awareness among Petaling Jaya residents to inform them of the proposal, ” said Yew Leong during a banner distribution campaign along Jalan Harapan in objection to the proposed development.

“Petaling Jaya is supposed to be moving towards becoming a low-carbon city.

“Another highway will contribute to more traffic in the city and undo everything the authorities have planned, ” he said, adding that the project, if approved, would add to the number of expressways in the city.

Meanwhile, Jalan 14/1 to 14/15 RA chairman Selva Sugumaran said Petaling Jaya had numerous new developments that relied on the same roads and that it was time the highway was diverted towards these new developments.

“We may not be able to stop the highway but don’t take away our houses.

“If there is a need to pass through Petaling Jaya, then the residents must also have access to the highway, ” said Selva, adding that the highway should cut into Section 13 as the area had been redeveloped.

Esham Salam, who is spokesperson for MyPJ, which is a coalition of Petaling Jaya Residents Associations and Rukun Tetangga, said the government should promote the use of public transportation and that Petaling Jaya did not need another highway.

“We want a walkable city, one where you can reduce reliance on motor vehicles. We have the LRT and Petaling Jaya free bus services.

“We should be promoting public transport, not build a highway.

“Petaling Jaya must live up to its sustainable city aspirations.

“For now, we do not see a rationale for this highway built over a matured city, ” Esham added.

Damansara MCA division chief Tan Gim Tuan said the Selangor government should stick to its manifesto of not having anymore tolled roads.

He said the elected representatives did not reject the idea of the proposed new highway when it was presented at state level.

“The highway does not benefit Petaling Jaya residents and building more highways will not solve the traffic problem, ” he said, adding that the ball was now in the state’s and Petaling Jaya City Council’s (MBPJ) court.

“The developer only presented the proposal once to the state. We have expressed our concerns regarding some sections of the highway route, especially near rivers and high-density areas.

“We have yet to receive a detailed proposal from the Federal Government and the state government will go through a thorough procedure before finalising the alignment, including carrying out all kinds of studies as well as public engagement, ” he assured.

Izham added that the initial proposal indicated that not all segments of the proposed link were copied from the previous Kidex alignment.

Meanwhile, when asked to comment, a representative from the developer of PJD Link responded, “We have been engaging with residents on the project and will continue to keep them updated on it.

“Those who wish to know more can engage with our company via our email at info@pjdlink.com.my, ” it added. 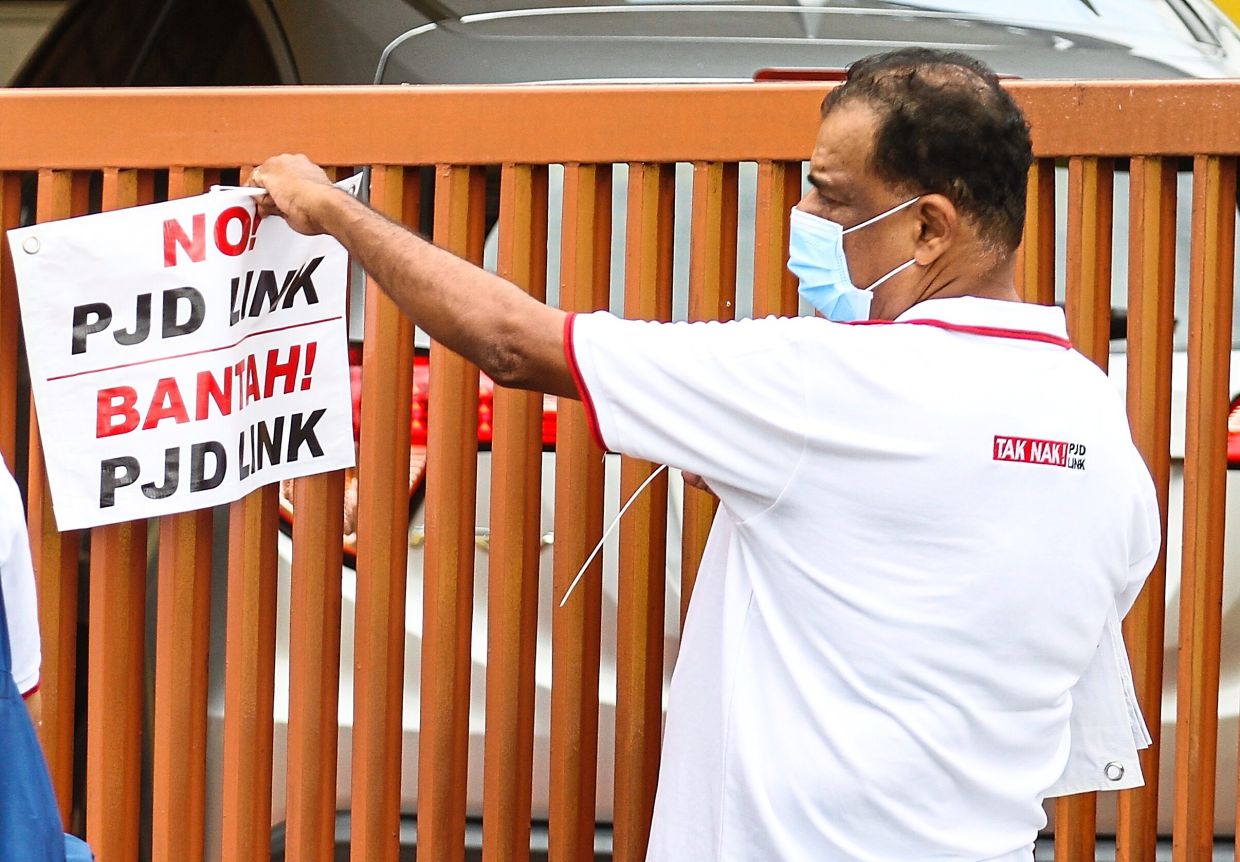 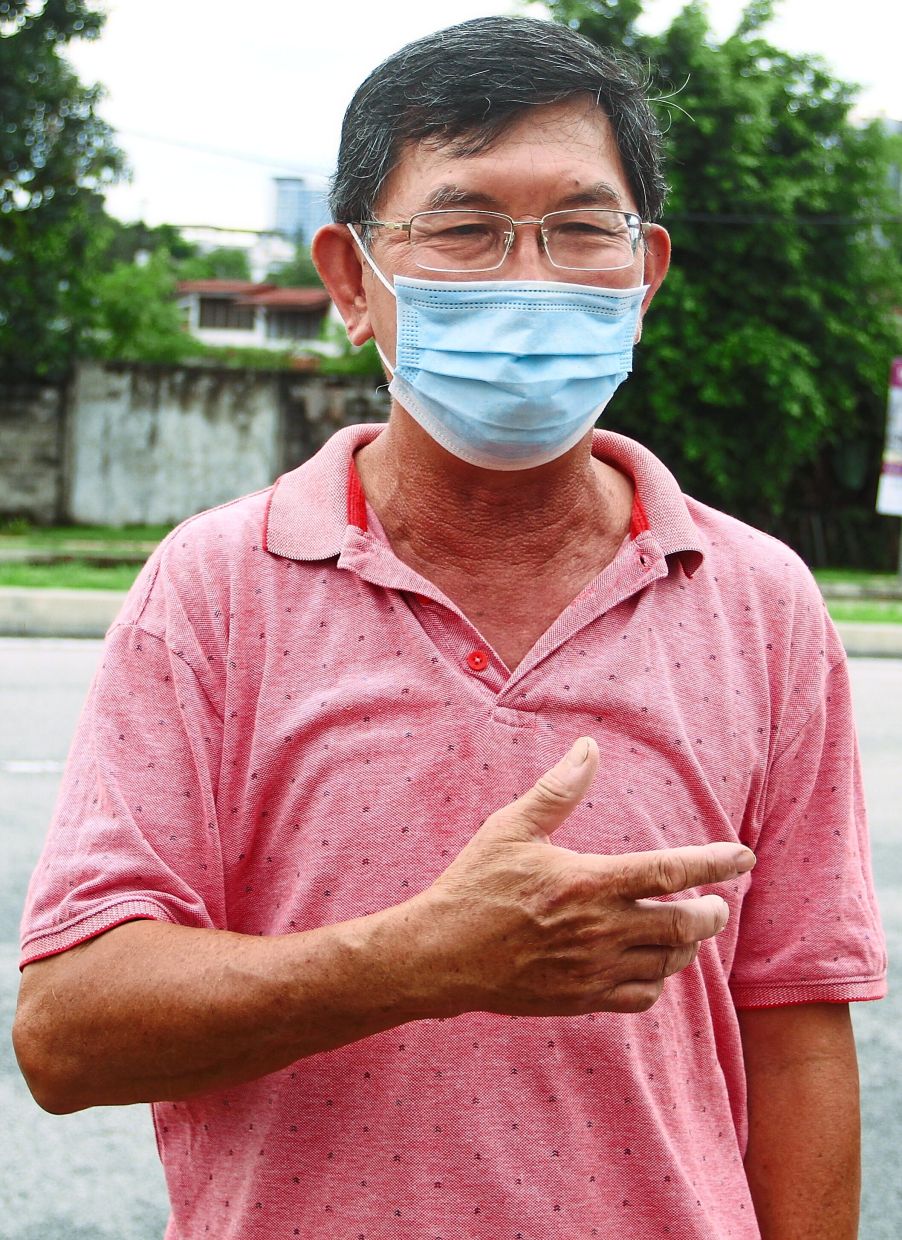 Members of Concerned Residents Section 14 Petaling Jaya placing banners in front of houses in Section 19 along Jalan Harapan to raise awareness of the issue. 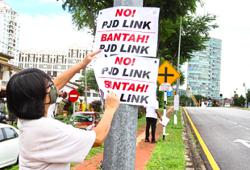