Two expressway projects to be ready in 2025

He said to date, 21% of the CSR line had been completed, with 62km of the road from Merapoh to Kampung Seberang Jelai in Pahang already in use.

“Once the two road projects are completed, they are expected to reduce traffic congestion, especially during peak hours, weekends and festive seasons, besides help reduce accident rates, ” he told reporters after meeting two Kelantan state exco members in Kota Baru, Kelantan on Sunday.

Mustapa said the CSR project involved the construction of a 295.7km highway from Bentong, Pahang to Kuala Krai, Kelantan while the 67.6km-long KBKK Expressway comprised several packages, with the total cost approved for both projects being RM9.5bil.

He added that RM815mil had been allocated for the two projects next year, with RM165mil being set aside for the implementation of the KBKK project.

“A total of RM270mil has been allocated for the CSR project in Kelantan and RM380mil for the CSR line in Pahang, ” he said.

However, Mustapa said the two projects, which were proposed under Budget 2021, could only be carried out if the Budget is passed in Parliament.

Asked about the Sultan Ismail Petra Airport terminal expansion project, Mustapa expects work to start in about a month’s time as the contractor selection process is still being carried out.

“We expect the project to begin early next year and completed in three to four years’ time, ” he said. — Bernama 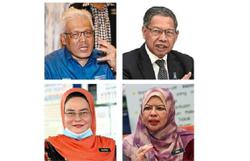