Chew (in white shirt) with Kota Kemuning residents (from left) Ang, Lee, Lim and Chee Yew Chai at a press conference urging MBSA to fulfil pledges made during a town hall meeting in 2016.

Kota Kemuning residents are urging Shah Alam City Council (MBSA) to fulfil all traffic solutions and infrastructure proposed by the city council during a town hall meeting held in January 2016.

“This structure is necessary to replace the cancelled flyover project that would have provided dedicated access from Persiaran Anggerik Mokara to the commercial area, ” he said.

Ang said in the original masterplan for Kota Kemuning, Persiaran Anggerik Malaxis was designated as a main access to the township, but the link connecting it was not built.

“These traffic lights are necessary to reduce the number of accidents at these intersections.

“There are presently seven T-junctions along that route, so MBSA will close three of them after the traffic lights are built.”

Ang said residents had agreed to the solutions proposed by MBSA, based on a traffic study done by its appointed consultant Public Works Institute of Malaysia (Ikram).

“MBSA’s proposal was for the solutions to be done in stages, ” said Lee.

“Phase 1A, which is to widen the roundabout near McDonald’s, has been completed. However, the subsequent phases have yet to materialise. “Phase 1B is for traffic flow in Kota Kemuning to be streamlined, then the slip road built during Phase 1C.

“Phase 2 is for three flyovers to be built to ease traffic flow along Persiaran Anggerik Mokara to the developments near Teluk Panglima Garang, Kuala Langat, ” he said.

Lee said there were several major developments in that area by different developers, hence infrastructure upgrades were necessary to cater to a growing population.

Ang said traffic congestion in Kota Kemuning was so bad that it was no longer restricted to only peak hours.

The problem is compounded by customers who patronise two drive-through businesses along Persiaran Anggerik Vanilla, which results in a spillover of traffic onto the road and roundabout.

“We have approached the MBSA councillor and assemblyman to highlight our plight, ” said Lee.

Meanwhile, Lim Chin Hong said he had yet to receive any feedback from the authorities after submitting an application to build a Buddhist temple on a land earmarked for non-Muslim places of worship.

“This application was submitted in Oct 2013 to build a temple on 0.2ha along Persiaran Anggerik Renantanda, ” said Lim.

“There are places of worship for the Christian and Hindu communities in Kota Kemuning, but none for the Buddhist community. The nearest place is in Bukit Rimau, ” he added.

The residents, who have been living in Kota Kemuning for between 10 and 20 years, are also members of watchdog organisation Prihatin Selangor that monitors the performance of local councils.

“We are urging MBSA to fulfil what it promised during the town hall meeting.

“The traffic issues have been highlighted numerous times, even before GE14, ” said Kota Raja MCA secretary Jackie Chew, who called for the press conference on the residents’ behalf.

When contacted, MBSA corporate communications head Shahrin Ahmad said it was in the process of appointing a consultant to carry out the design work and bill of quantities details, as well as getting the necessary allocation for the slip road project. 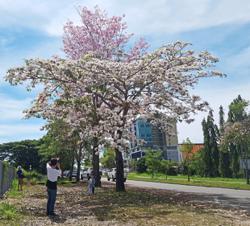