(From left) Khalid and Nor Hisham at the public exhibition of the KLSP2040 draft at Menara DBKL 1 in Jalan Raja Laut, Kuala Lumpur.

THE social demographics of Kuala Lumpur are changing and the Kuala Lumpur Structure Plan 2040 (KLSP2040) will play a critical role in ensuring the city’s development complements its new social landscape.

Khalid said Kuala Lumpur had also observed a decline in terms of its average household size.

He said KLSP2040 detailed the development policies for Kuala Lumpur and would account for the city’s changing social landscape.

He said Kuala Lumpur City Hall (DBKL) aimed to boost the use of public transportation to reduce traffic congestion in the city.

“We aim to increase the ratio of public transportation-to-personal vehicle usage to 70:30 by 2040,” said Khalid.

He added that environmental aspects would also be given priority in KLSP2040.

“The plan contains strategies and policies aimed at creating a low- carbon city that is sensitive to the environment.

“It is hoped that this effort will help combat the problem of global warming,” he said, adding that more shady trees would also be planted to beautify the city.

DBKL is asking for public feedback on the draft KLSP2040.

“The public can give their feedback until March 18, either by submitting the special form or via the website.

“Those who submit written feedback will be invited to a hearing for an explanation by experts on urban planning,” he said, adding that the hearing sessions were expected to be completed within two months.

Khalid said KLSP2040 could still be amended after its gazettement.

However, any amendments to the plan would be made in accordance to due process and law.

Legal action could be taken against DBKL if it failed to abide by the plan, he added.

Once KLSP2040 is gazetted, a local plan will be produced and exhibited for public viewing for a month and a half to gather feedback.

“The local plan will contain more specific details such as land use, zoning, plot ratio and density, among others,” he explained.

The plan will also be available for viewing at the Taman Tun Dr Ismail library and Menara DBKL 3 until Feb 24.

The exhibit at Menara DBKL 1 is on until March 18.

The public can also give their feedback at www.dbkl.gov.my/epandangan. 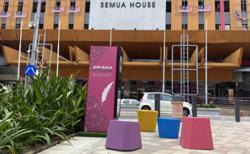