Shoppers are required to pay 20 sen for every plastic bag used on Saturday.

PEOPLE in Perak are receptive to the idea of banning single-use plastic for the betterment of the environment.

Those interviewed by StarMetro, however, feel that the banning of plastic packaging, including straws, lids and cups should be done in stages over time rather than immediately.

Marketing student Belinda Lawrence, 20, said youngsters are ready to accept the changes if the ban is imposed in Perak.

“Youngsters are already on board with the less-waste movement and many are already bringing their own stainless steel straws with them or drinking straight from the cup.

“The ban will definitely receive the support of the younger generation, but I still suggest that the Perak government take it slow before banning all plastic straws and single-use plastics,” she said.

“It is the tiny actions like bringing your own containers and cups that will make the biggest difference when it comes to saving the environment,” she added. 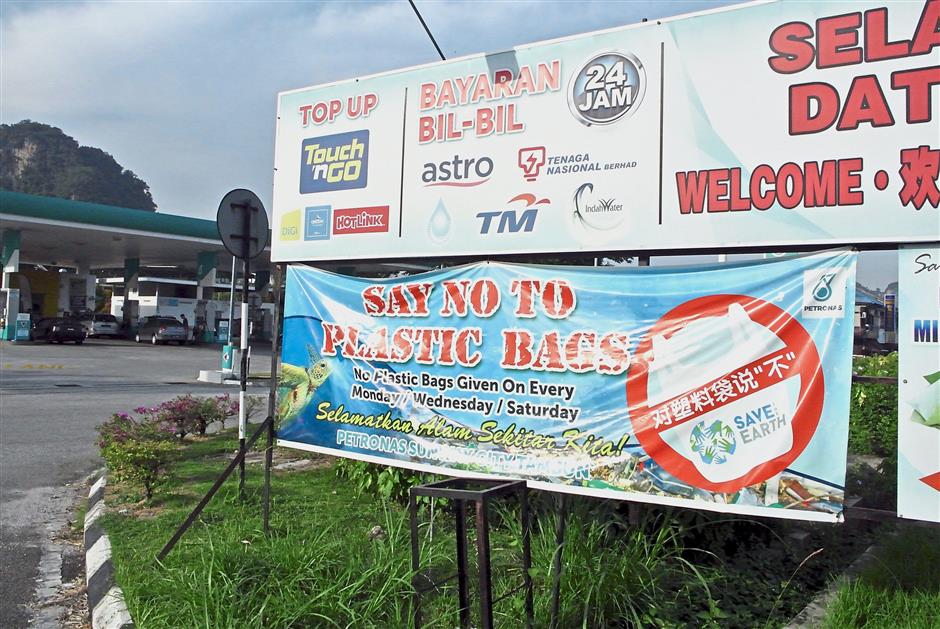 People interviewed by StarMetro say they do not mind bringing their own bags in order to save the environment.

It was reported recently that Penang is looking into banning plastic straws and other single-use plastics.

Housing and Local Government Minister Zuraida Kamaruddin was also reported to have remarked in May that there will be a nationwide ban on plastic bags within a year.

Lawrence said most plastic usually ends up in areas such as our drainage systems, which then leads to the rivers.

“We cannot blame the government entirely for the terrible drainage system as it is the actions of the people who cause blockages in the first place,” she said.

“By banning plastic straws and single-use plastics, we will be one step closer towards creating a sustainable environment and reducing our excessive consumption,” she added.

She said plastics have already affected the Sungai Kinta in Ipoh. Plastic cups and straws are a common sight all over Malaysia.

“In the old days, my father and his friends used to swim in the river, but now the water is dirty and filled with plastic.

“Plastic also clog some tributaries, causing floods to occur during downpours,” she said.

“Aquatic creatures in the Kinta River are currently paying the price for our thoughtless action and this is why Perak should follow Penang’s example,” she added.

“Citizens, especially the older generation, like to burn their rubbish including plastic as they find it more convenient than discarding it.

“Burning plastic is bad for the environment as harmful chemicals are released into the air,” she said.

“This can cause health issues for people nearby, such as damage to the respiratory system,” she added.

Ng said the ban could first be imposed at bigger eateries like McDonald’s and Starbucks before it is implemented in local restaurants.

“Restaurants like these tend to have regular customers so consumers would not stop visiting these places because of the ban. “Through these large chains, customers then become accustomed to bringing their own cups and food containers,” she said.

“Then only should the state government impose the banning of plastic straws and single-use plastics in all eateries throughout the state,” she added.

“If the people keep up with this attitude, slowly Perak will be known as a dumpsite.

“This could affect tourism in Perak as travellers will be welcomed with images of plastic cups and bottles by the roadsides,” she said.

“Citizens should minimise the use of plastic and make a habit of throwing their rubbish into proper rubbish bins,” she added.

Ain Hidayah also feel that people should be given time to adapt to the change if such a ban is to be implemented in Perak.

“A lot of people tend to want change but they are not willing to do it straightaway, so starting slow is a good idea.

“For instance, customers who are dining in restaurants should be given glass cups and metal straws instead of plastic ones,” she said. “Customers who know that they are going to take food home should always bring their own containers instead of using plastic food boxes,” she added.

Customer service assistant Lee Hoei Min, 26, said the ban could potentially be the first step to saving the environment.

“I understand that the change is not easy as everybody uses plastic in their daily lives.

“If both Penang and Perak agree to impose the ban I trust that the other states will eventually do the same,” she added.

Lee said the ban could contribute to a cleaner and healthier environment.

“During the rainy season, plastic cups thrown in public places will be filled with water which can become a breeding area for mosquitoes.