ON SATURDAY, three days after GE14, the people of Perak heaved a sigh of relief over the fact they now had a state government.

With Pakatan Harapan winning 29 state seats, Barisan Nasional 27, and PAS three in the general election, no single party had achieved a simple majority of 30 seats to form the new state government.

Many members of the public followed developments closely as Pakatan and Barisan raced against the clock, and with each other, to cut deals to gain the coveted simple majority.

Finally, at noon last Saturday, two Barisan assemblymen pledged their support to Pakatan, successfully ending the saga that many feared would lead to a replay of 2008’s political crisis.

Many Pakatan supporters gathered outside Istana Kinta in Ipoh waiting for the Sultan of Perak to arrive at a decision about the composition of the state government.

With 31 seats in hand, the swearing-in ceremony for a new mentri besar of the Pakatan Harapan state government then took place at Istana Iskandariah in Kuala Kangsar at 6pm the same day. 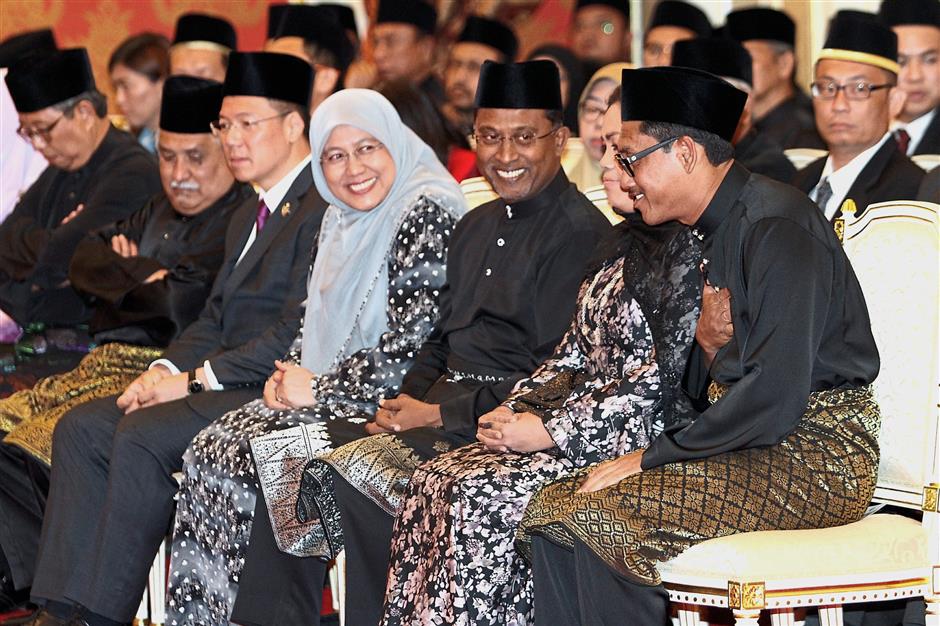 A small crowd holding and waving PKR flags and banners gathered outside of the palace, eager to stay throughout the duration of the ceremony and to find out who their new mentri besar would be.

The crowd cheered when it learned state Pakatan Harapan chairman Ahmad Faizal Azumu would be the state’s new mentri besar.

Among the people gathered outside the palace were husband and wife T.Y. Lee, 55, and Karen Lein, 50.

Lee, who works as a builder, and Lein, a homemaker, said they gathered in front of Istana Kinta at noon and later travelled to Istana Iskandariah here when they learned about the swearing-in ceremony.

“I think throughout the country’s 60 years after independence, this is the happiest time for Malaysians. Ahmad Faizal left for his family home in Sungai Rokam to pay his respects to his mother Datin Zaleha Nordin after the ceremony. With them is his wife Dr Nomee Ashikin Mohammed Radzi (right). — Bernama

“Now that we have a new state and federal government, it almost feels as if we are liberated,” said Lee.

Lein said they were excited to experience such sweeping changes and wanted to witness for themselves the moment Pakatan leaders sought an audience with Sultan Nazrin Muizzuddin Shah, for the swearing in of the new mentri besar.

“We were quite anxious throughout the entire process. With every minute it was delayed, it made us worry something might upset the process.

“We didn’t want a repeat of the 2008 political crisis when Pakatan won Perak in the GE13 only to lose the state to Barisan after 11 months due to defections. We want to make sure our government is changed for good until the next election,” she said.

Asked if they knew anyone in the crowd, Lee said they did not, but it did not matter as they were all Malaysians.

“We are united, and everyone here is Malaysian. Today’s change is what we hope to see for the sake of our future generation,” he said.

Neighbours and friends Haryana Yunos, 34, Siti Haida Yusof and Noraini Mat Saleh, both 50, were also waiting outside the Istana Iskandariah together.

“We came here in three cars from Istana Kinta. We want to see the changing of a new government here in Perak, hoping that it will be better.

“I don’t think we’ve ever been this excited about politics and government affairs until GE14,” said Siti Haida.

Noraini said she hopes the new government will do a better job in fighting corruption and ensuring the country is in capable, clean hands.

“Ever since we found out that neither Barisan and Pakatan could form a state government immediately after the election, I was so worried I prayed every day for a stable transition to happen,” she said.

Haryana, an entrepreneur, said she could not wait for Pakatan to fulfil its manifesto, especially to abolish the Goods and Services Tax (GST).

“Things are expensive because of GST. I hope it’ll be gone and our financial burdens will decrease,” she said.

Information technology administrator M. Balaguru said he too had travelled from Ipoh to Kuala Kangsar to show his support to the formation of a Pakatan Harapan state government in Perak.

“We didn’t know who was going to form the government at first, but when we found out it was Pakatan, I asked my friend to join me to give our support,” said the 28-year-old who was standing outside of the palace with his friend A. Peter, also 28.

Balaguru said he has been passionate about Pakatan’s efforts since GE13.

“With a new government, we are hoping to see more media freedom. We also don’t have to feel afraid about showing support to either side of the political divide, we can speak up without fear of persecution,” he said.

After the swearing-in ceremony was over, newly minted Mentri Besar Ahmad Faizal expressed his gratitude to the people of Perak for their trust in electing Pakatan as their representatives in government.

“We would also like to apologise for the delay in forming the government as a smooth transition of power was of paramount importance.

“The results of GE14 have proven that the people of Perak demand an effective, transparent, honest and honourable government.

“In fact, this was the message at the ballot box across the nation and our administration views the will of the electorate with utmost respect,” he said.

Ahmad Faizal also said the state government will work closely with the Federal Government on all relevant matters while upholding the interests of the state.

“We, as elected representatives, must deliver and I, as mentri besar, will ensure that this administration delivers on its pledges,” he said.