Tan﻿ ﻿﻿preparing ﻿the soy and vinegar-infused lo mee gravy. Atap O-D is highlighted in one of Ling’s earliest posts that feature the culinary delights of Yong Peng.

YONG PENG: The spark for Ling Tian Soon to start his own vlog (video-blog) introducing the lesser-known, but delicious dishes in town started after a friend suggested he should use his talent to promote Yong Peng’s food scene.

The set-up is simple, just a mobile phone and a hands-free microphone kit, each video is about three-minute long with him commenting on dish’s merits and unique points.

Many of these eating places are long-time establishments in Yong Peng, with some of them a few decades old, such as the Eng Hin kuih shop along Yong Peng’s main road, which has been in business for over 50 years. 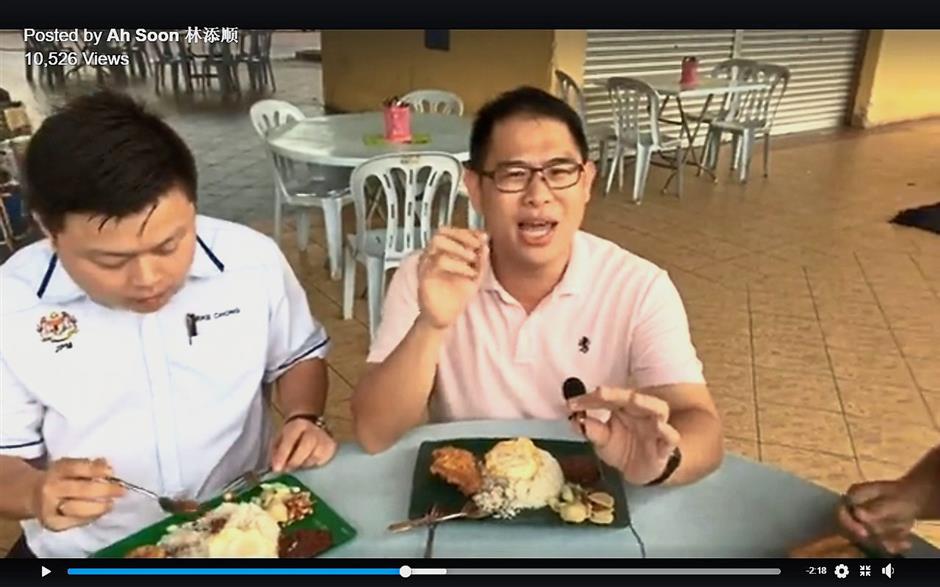 A screenshot of Ling (right) introducing one of Yong Peng’s lesser-known, yet tasty dining places on his “Ah Soon’s Good Food” video posts.

For one of Ling’s earlier vlog entries that was on popular noodle place Atap O-D, social media has helped increase the number of customers, especially outsiders, to come and savour their handmade lo mee and Foochow noodles.

“Most of my customers were from two neighbourhoods initially,” said Atap O-D’s second generation cook Tan Poh Siong, adding that they now had more customers from out of town than the locals, especially on weekends and holidays.

Since Ling’s 25th vlog onwards, he has begun to cover the cafe scene in Yong Peng, where features such as ambience and menu range also play a role, Ling explained.

“Yong Peng has a lot of good stuff to eat, that’s why I’m doing this vlog, and I also feature a lot of famous dining places in our Visit Yong Peng campaign last year,” said Ling.

He said Yong Peng had a growing cafe scene, as those who studied or worked elsewhere had found new ideas and wanted to try them out here.

“A lot of them are also opening their own bakeries and cake shops, so it’s an exciting time for the local food scene now,” he added.