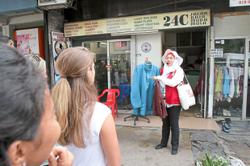 The fire that gutted part of the five-star Andaman Resort in Langkawi has been brought under control. - Sin Chew

Guests at The Andaman, where a fire recently broke out, have all been safely relocated to other hotels.

"We can confirm that a fire broke out at The Andaman, a luxury collection resort, in Langkawi on Tuesday (Jan 12)," the resort said in a statement.

"As soon as we were aware of the incident, we informed the authorities and moved swiftly to evacuate the hotel.

"As an additional safety precaution, all guests have been relocated to our sister property while investigations are ongoing," the resort said.

News of the fire made its round on social media with videos depicting flames raging the wooden structure of the popular five-star resort.

Earlier, The Star reported that the fire has been brought under control as at 1pm today (Jan 13).

"About 40 firemen were rushed to the scene and they managed to put out the fire but it flared up again on Wednesday (Jan 13) morning.

"We have brought it under control and the men involved are presently clearing the debris and assessing the damage and cause of the fire," he said.

The fire was believed to have started in the kitchen of the luxury resort and spread to the main part of the building.

"We are working closely and in cooperation with the fire department to determine the cause of the fire," the resort said.
Article type: metered
User Type: anonymous web
User Status:
Campaign ID: 18
Cxense type: free
User access status: 3 Tourist guides in Malaysia struggle to cope amid MCO and travel ban
Where do Malaysians want to travel to (once it's safe) in 2021? Premium
Malaysians can see the Northern Lights and Spain on free virtual tours
What languages are the easiest to learn while stuck at home?
5 popular restaurants Malaysian foodies can visit in the future
Over-the-top gardens are the new vacation spots
MCO 2.0: Hotels in Malaysia feel neglected, being 'left to collapse'
MCO 2.0: Tourist guides need more than RM500 assistance to sustain livelihood
MCO: Malaysians feel the travel ban blues, but happy to avoid nosy relatives
Let’s get beefed up for wagyu, the meat that melts in your mouth