How to be a tourist in Sabah during Visit Malaysia 2020

A view of Mount Kinabalu from Kundasang.

To say that Sabah is a great place to go for a holiday in Malaysia is an understatement. Of course, I may be biased as that’s my home state, even though I have lived elsewhere for the past two decades.

But a recent trip home with some media friends and Tourism Malaysia showed me that Sabah truly is a wonderful holiday destination not just for international tourists, but locals too.

It’s not all about our majestic Aki Nabalu aka Mount Kinabalu, gorgeous islands and forest reserves too; it is also our people, culture and traditions, as well as our food that make Sabah such an interesting place to visit. Even for a Sabahan.

For one, the Bornean lifestyle is vastly different from that of the folks in the peninsula. We take things slow and easy (which can sometimes be frustrating when you’re not on a holiday!), and we actually do take the time to stop and look at the sunset – or sunrise, depending on where you are in the state – every day.

And what a beautiful sunset/sunrise we have.

As a growing number of holidaymakers are opting to travel domestically as a way to reduce aviation emissions and encourage sustainability in the industry, Sabah becomes an even more attractive place to visit for Malaysians. Consider a five-night sojourn in the West Coast and Kudat divisions, whenever one of the seven official long weekends rolls by next year. 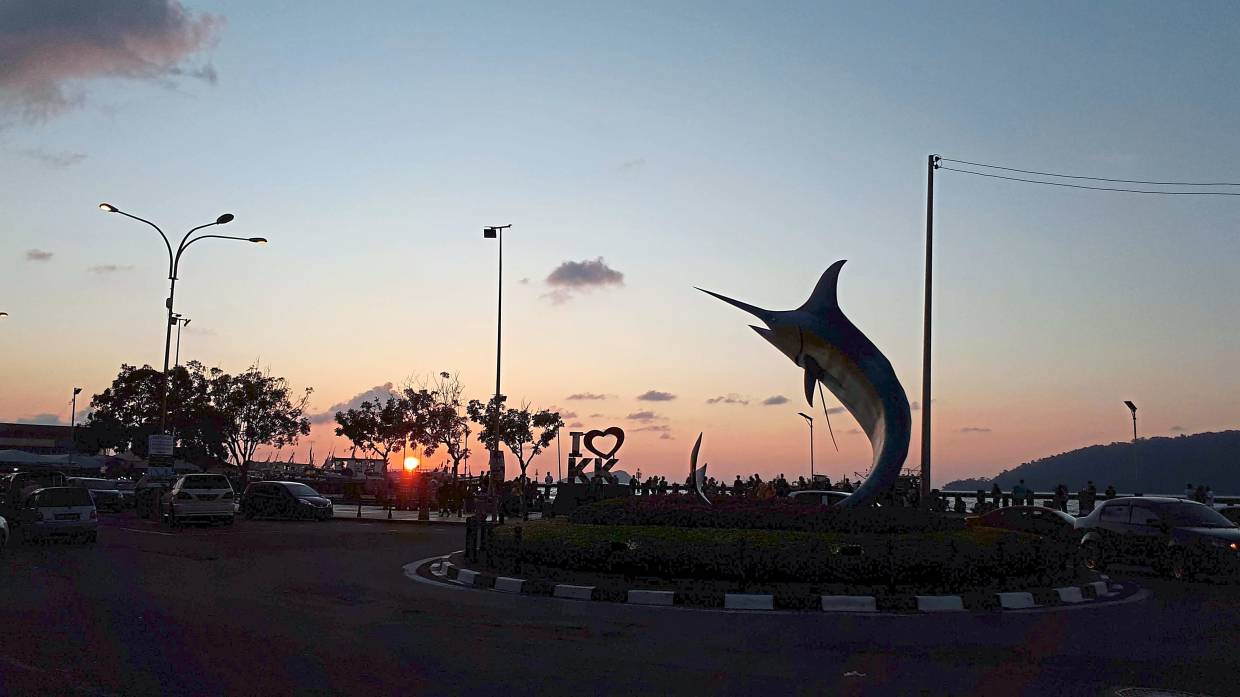 In your plans, be sure to make KK your first stop as it easier to go to any of the five divisions in the state from there. For example, the capital city in the West Coast is about 100km or two-and-a-half hours from Ranau, and 180km/three hours from Kudat. Sure, it seems like a long journey, but there are plenty of roadside stalls along the way selling snacks, farm produce and even souvenirs that cater to road trippers.

This, in fact, is what I remember the most from my childhood “travels” more than 30 years ago – when my parents would take me and my siblings to neighbouring districts and towns, stopping by the stalls to stock up on snacks.

This time around, we stopped by a stall somewhere in Kota Belud on the way to Kudat and bought some char-grilled corn. “Sana saja tu saya tanam (I just grow it there), ” said the lady, pointing to a small plot of land behind her stall.

In Kota Belud, we were greeted by a Bajau horseman and his decorated steed early in the morning at our glamping resort, Cabana Retreat. Opened earlier this year, this place has fast gained popularity as an affordable beachside resort and a cool getaway for locals thanks to social media postings. You sleep in air-conditioned tents, have your meals at the rustic dining hall or on the beach, and hang out at common areas at night to watch movies.

Nearby, the Bengkel Kraftangan Tenunan Dastar (a Dastar weaving workshop) welcomes visitors keen to learn more about the hand-woven cloth of the Iranun folk, an ethnic group mainly found in Kota Belud. A piece of Dastar cloth features intricate designs and usually folded and worn as a ceremonial headgear by several ethnic groups in Sabah, including the Kadazandusun and Bajau.

The workshop is headed by Pandian Sulaiman who lamented that the younger generation is no longer interested in learning the traditional craft of her people.

“It takes a while to make just one piece of cloth and it is difficult to learn. Today’s young ones are no longer interested in making this a livelihood, ” she shared. One of our tour guides wearing a headgear made from a kain Dastar, and a traditional shirt typically worn by Iranun men on special occasions.

Similar grievances are voiced by the traditional gong makers at the Bengkel Pembuatan Gong Kampung Sumangkap in Kudat, a small Rungus village in which almost every household specialises in making gongs. The village is part of the ongoing Satu Daerah Satu Industri (one district, one industry) initiative by the Tourism, Arts and Culture Ministry and Kraftangan Malaysia. Through this initiative, it is hoped that the traditional crafts and heritage (native to a particular district or village) remains in existence. “Making the gong is not that difficult but tuning it properly is. In this village, there are only a handful left who have that important skill, ” said one of the gong makers in Sumangkap. She added that many of the young ones are no longer interested in learning how to make gongs, and are even leaving the village to chase their dreams elsewhere.

Perhaps the Rungus beadmakers at Pusat Gubahan Manik Kampung Tinangkol in Kudat would fare better in the future. For the Rungus folk, especially women, making Pinakol or beaded necklaces is akin to a rite of passage. A young girl would learn how to make the Pinakol and other accessories from their mother or grandmother, or even older sibling. “Sebelum kau kahwin, kau mesti belajar dulu buat ni (before you get married, you must learn how to do this), ” said one of the younger beaders at the centre, perhaps half-jokingly as the other older women started laughing.

We spoke to Nonjiring Mantuku of Odong Handicraft Enterprise, who was there at the centre to show us some of the traditional motifs found in Rungus beaded accessories. The most popular is the “Vinusak” or flower, which symbolises life.

“We learned how to make this when we were kids, this is our tradition. Today, not many do this everyday as they’ve got other jobs but that’s alright because what’s important is that they still know the craft, ” said Mantuku.

You can buy the Pinakol from anywhere in Sabah, but at the centre in Kudat, you can get background stories on some of the more complex motifs from the ladies, who tell them so lively and animatedly.

About an hour’s drive away from there is one of Sabah’s most iconic landmarks – Simpang Mengayau or the Tip of Borneo. Sabah is shaped like the head of a dog, and Simpang Mengayau is where the left ear is. My first time here was three decades ago, when the place was just a rocky cape with nothing much to see. Today, Simpang Mengayau is a proper tourist attraction that caters to the many visitors who throng the area. Simpang Mengayau is a popular spot among locals and tourists.

There’s a viewing platform and an open event space too where people can just hang out and chill. Our group spent about an hour lying on the warm bare cement trying to take pictures of the sky at night. We had hoped that there would be beautiful twinkling stars (yes, stargazing is a thing in Sabah) for us to take pictures of that night, but alas the moon was too bright.

Continue your slow and steady, unadulterated holiday in Sabah with a trip to the highland. If you’re not climbing the mountain, stop by the Sabah Tea Garden in Ranau for a spot of tea, or the Desa Cattle Dairy Farm, aka the “mini New Zealand of Sabah” in Kundasang for some ice cream.

Wake up early in the morning – it will be cold, really cold, so suit up – to see the sun rising over Mount Kinabalu. One of the best places to do this is at the H Benjamin Residence, a cosy boutique hotel that was badly affected by the devastating earthquake in 2015, but managed to fix itself up nicely after that.

If you’re looking for something more rugged, head to the Polumpung Melangkap View Camp Site, where you get to see a gorgeous view of the mountain at mid morning. This fairly new camp site was “formed” as a direct result of the earthquake, when geographical changes took place. Apparently, the Melangkap area used to look very different before that. Campsite owner Somboton Gunsalahon, who is also one of the village leaders in Melangkap, shared stories about the earthquake and the following floods that nearly destroyed the place.

“We saw a boulder actually floating away on the river during the flood. The streamflow was just that strong!” he shared.

Back in the city, the Pillars of Sabah public art exhibition awaits. These pillars are remnants of the Land and Survey building (built before World War II), which burned down sometime in the 1990s. A group of young Sabahan creatives – Red Hong Yi, Jared Abdul Rahman and Melissa Lo – started an art project called Pillars of Sabah in 2018, using the pillars as canvases for some local artwork.

This year, Pillars of Sabah 2.0 was launched, where 30 painted images of endangered wildlife like the pygmy elephant, Bornean sun bear and Sunda pangolins are featured on the pillars.

If you would like to admire more works of art, you can always head to the Sabah Art Gallery, or just keep a look out for the gigantic murals that seem to be popping up everywhere in KK.

Those with more time to spare may want to take a boat out to any of the five islands located within the nearby Tunku Abdul Rahman Marine Park. It’s a 15 to 20-minute boat ride away, and you can even “hop” from one island to the other. Of course, for the best diving spots, you need to head out to the east coast of Sabah.

End your trip with a satisfying fresh seafood feast, or a typical Sabahan meal – rice, fried fish, salted fish and simple greens. Several restaurants have started putting this meal on their menus to attract tourists, but D’Place Kinabalu offers something extra: the butod or sago worm.

At this eatery, you can eat the fat butod alive and wriggly, or lightly “cooked” as butod sushi. Either way, eating a butod is probably one of the top 10 Bornean food experiences you need to try at least once.

Malaysia Airlines flies direct to Kota Kinabalu from Kuala Lumpur up to 10 times a day. The airline also flies from other states including Johor, Penang, Kelantan and Sarawak. For more information, head to malaysiaairlines.com. 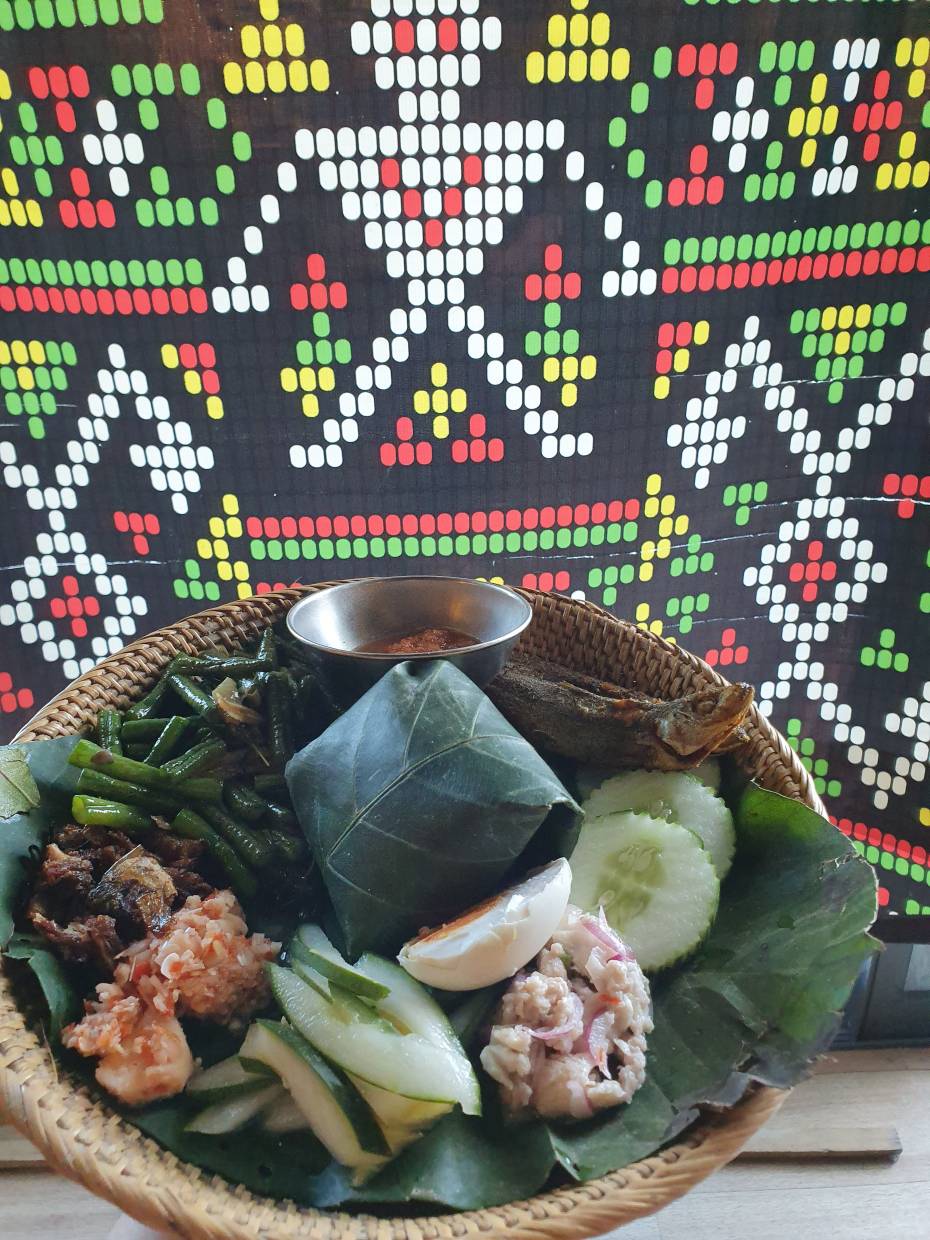 A view of Mount Kinabalu from Kundasang.

Simpang Mengayau or the Tip of Borneo.

One of the pillars featuring Bornean pygmy elephants at the Pillars of Sabah 2.0.

A Bajau horseman and his loyal steed in full regalia.

One of our tour guides wearing a headgear made from a kain Dastar, and a traditional shirt typically worn by Iranun men on special occasions.

Butod is full of protein. Maybe.

Comfort food for any Sabahan.