Entrepreneur Adeline Lee, 58, said this will be her family’s happiest reunion dinner yet, as four generations of the family will unite for the feast. The youngest addition is five-month-old Lucian Chong, the firstborn of her only son Alex Chong and daughter-in-law Joan Tiong.

Lee, who is Group Chief Operating Officer of Sakura Kristal group of companies, said that her family mostly dines out during reunion dinners as she would be busy with her work in the chain of restaurants. Moreover, the dining hall in her home is too small to accommodate a dozen people including her extended family.

Lee’s family are vegetarians on the first day of Chinese New Year.

“It’s a family tradition that is handed down from our grandparents,” she said, adding that the family would cook large portions so that visiting relatives can also enjoy the vegetarian dishes.

If the family is dining at home, she said, it would take three hours to prepare the festive meal. Her favourite is Poon Choi (or Basin Dish, a traditional Chinese New Year dish which consists of assorted dishes in one big ‘basin’). This year, the family plans to cook Lap Mei Fan (waxed meat rice) on the second day of Chinese New Year.

Memories of dinners in the ancestral home

Petaling Jaya-based architect Alan Teh, in his 40s, comes from a big family. He grew up in a Chinese village in Bukit Mertajam, Penang.

His father has seven siblings. Although his parents have moved out of his grandfather’s house, they still return to the patriachal home to celebrate Chinese New Year every year.

Recalling those fond memories during this festive season, he said: “All my uncles would come back and celebrate Chinese New Year together at the old kampung house. However, ever since my grandparents’ house was demolished to make way for development, we now have our own (individual) family reunion dinner, It’s not as lau juak (Hokkien for merry).”

Alan Teh (front row, second from left) and his clan at their anchestral home in Kg Aston, Bukit Mertajam, in 2007. The photo was taken before they were evicted to make way for development. Photo: Teh Giek Hooi

Then there is this essential custom. The family would eat the flesh of the fried fish, but leave the head and tail overnight in the kitchen. The Chinese phrase yu tou yu wi (Mandarin meaning there’s head and tail) reminds them that they should always complete their tasks and wish for positive rewards.

This year, Teh will again be at his parents’ house in Bukit Mertajam for the reunion dinner. It is not a big affair but Teh is looking forward to his mother’s steamboat dinner, especially his favourite ingredient, fish maw!

Software engineer John Lee, 44, reminisced about the times he used to drive back to his hometown in Kota Baru for Chinese New Year.

“It has always been my most memorable moments – when my grandmother would make all our favourite dishes, such as the Nyonya hong bak (braised pork with aromatic spices), steamed crab meatballs and peppery chicken soup. My grandmother was a Peranakan while my grandfather, Kelantanese Chinese. We speak a form of local Hokkien dialect with a mixture of loghat Kelantan (Kelantanese dialect).”

John Lee's family gathered for lou sang during Chinese New Year in 2010, when his grandmother was still around. Lee remembers the delicious dishes that she used to cook for the festive dinner. Photo: John Lee

Reunion gatherings are boisterious affairs, with the noisiest being the young children – cousins, nephews and nieces – who add a lot of joy to the occasion. The adults will be in the living room watching TV or playing games, such as mahjong or cards, while some busy themselves in the kitchen, preparing the festive fare.

He said: “We would stay up for as long as we can. The children will change into their new pyjamas to welcome the new year. When the clock strikes midnight, we wish everyone a Happy New Year before going to sleep.”

“My aunt and her family always organise an open house on the first day of Chinese New Year and invite friends and family members over for a Kelantanese feast of nasi dagang accompanied by ikan tongkol, ayam gulai and udang gulai,” he says.

Lee’s grandfather, Yeo Kim Eng, 99, is currently staying with his uncle in Puchong, Selangor. His grandmother passed away in 2014. This Chinese New Year, the reunion gathering will be celebrated here.

Lee said: “My son, seven, is always happy to meet his great grandfather. My 70-year-old mother will be cooking our favourite dishes.”

Reunion dinners then and now

Assistant manager Lim May Kwoon, 29, who works in Bandar Sunway, Selangor, related that her current Chinese New Year experience is very different from 10 years ago.

When she was a student, the reunion dinner was a chore as she had to help out with the cooking.

However, she feels “very blessed” as the youngest in the family because she gets the largest portion of everything. “If dessert was ice cream, I can ask for two scoops and mum will always say yes (for special occasions).”

For this Penangite, one of her fondest memories is having KFC in Komtar for the reunion dinner. She was about five or six years old then and, after dinner, her father bought her a dress to wear on the first day of Chinese New Year. “It was the best time I’ve ever had,” she said.

Her family does not really practise strict customs during the festive period. “But one thing that always stays the same is mum’s cooking. I can’t wait to be back home and be mum’s spoiled little girl,” she said.

Reminisced Lim: “Nowadays, we usually have steamboat reunion dinner. The soup base will always be my favourite too tor thng (Hokkien for pig stomach soup)!”

The family has no taboos on the types of dishes for this annual event but there will always be pineapples, simply because ong lai in Hokkien means “here comes luck”.

Lim used to stay up to greet the new year when she was younger.

She said: “My mum’s ang pow will always be the first I get before I go to sleep in my new pyjamas. I cannot really remember when I stopped doing that. I should probably do it again this year, just for the fun of it.”

This year, she said, her mother has decided to be ambitious and cook a full meal instead of steamboat.

Said Lim: “I can imagine the whole day of preparation, and the ‘aftermath’. But instead of feeling it is a chore, I’m looking forward it. I would love to be able to cook with my feisty mum for many more years to come!”

Marketing consultant Shane Loh’s fondest memory of Chinese New Year reunion dinners is when her grandparents were still around.

“As my father has 10 siblings, family reunions at my grandparents’ house in Bangsar, Kuala Lumpur, were always a crowded affair filled with other uncles, aunties and cousins. The tiny house was always packed to the fullest, with more than 30 of us. Everyone helped out in one way or another – cooking, setting up tables, cleaning and eating,” said Loh, 35.

Her favourite dishes used to be her grandmother’s deep fried pork braised with black fungus and her grandfather’s pork ribs with pickled cucumber.

Now that she is married, reunion dinners are spent with her in-laws, and they alternate between dining out and eating at home.

A Cantonese, she said: “I still prefer reunion dinners at home rather than eating out. This year’s reunion dinner will be steamboat at home.”

Reunion dinners at restaurants, she felt, are always hasty with mass-produced dishes.

“Reunions at home just feel more homely, warm and different even with simple dishes. That is, if everyone helps out and contributes to making it a good one,” Loh said. 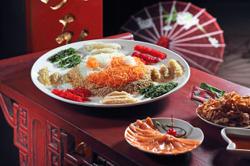