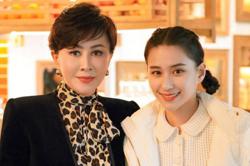 During their chat, the 61-year-old revealed that she grew up extremely poor and, later on as an adult, she struggled with depression.

The action movie legend – who started her career as an actress in the 1970s for the Shaw Brothers studio – told Lau that she begged for money on the streets when she was three years old as her parents found it hard to provide for all five children.

The Hong Kong born Hui said she did this for 10 years until she was 13.

Then at the age of 14, she worked as a dancer at a nightclub.

She got her break in the movies in 1977 when she was 17 years old, starring in The Brave Archer.

After that, Hui did many wuxia films that propelled her into further fame like Martial Club, The 8 Diagram Pole Fighter and My Young Auntie.

For My Young Auntie, in which she played the titular role, Hui won her first Hong Kong Film Award in 1982.

She is still working today. In 2016, she starred in Ho Yuhang’s feature Mrs K.

At this recent interview, Hui told Lau that thanks to her tough beginnings, she’s become a good judge of people’s body language and behaviour.

Hui also shared that she fell into depression as an adult when she was criticised for her acting and her looks.

“When my depression was at its worst, I was crying every day. I thought I was rubbish and useless.

“And I was hallucinating, and hearing voices conversing with me. They were telling me, ‘Why am I still staying here?’"

It drove her to attempt suicide when she was 40 years old, by swallowing over a hundred sleeping pills.

Thankfully she recovered and got her career back on track.

Hui recalled: “Because I get really affected by negative reviews, I resolved to prove (my critics) wrong through my hard work.”

And that she did. For her portrayal of a mother in the 2009 film At the End Of Daybreak, Hui received multiple Best Actress awards.

Her most recent win was at the 2019 Hong Kong Film Award where she received the Best Supporting Actress award for Tracey.

In 2018 too, she was awarded a Bronze Bauhinia Star for her contribution to the Hong Kong film industry

Hui concluded that the ups-and-downs she had experienced in her life is equivalent to two lifetimes.