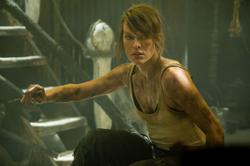 Everything I know about the Monster Hunter video game series is contained in Paul W.S. Anderson’s big-screen adaptation of the franchise, Monster Hunter.

There will be critics who can tell you who these characters are, or what’s up with the “new world” where monsters live, or why those of us in the “old world” should be worried about them, but that information is not presented in this visually interesting but narratively anemic motion picture, so please accept my apologies in advance: This review will likely be about as coherent as the film itself.

Milla Jovovich, who is married to Anderson and has starred in six of his Resident Evil movies (four of which he directed), wrapped that franchise a few years back and could use another.

Here, she plays a US Army Ranger (the notes identify her as “Lt Artemis, ” but her squad calls her “captain”) on some kind of UN mission tracking the disappearance of Bravo Team.

They went missing in the middle of a desert somewhere in “our world” – according to the coordinates provided on-screen (latitude: 33º 56’ 2.54” N, longitude: 67º 42” 12.35’ N), it’s the location of a Sheep and Chicken Store in Ghawcqol, Afghanistan, though South Africa supplies the movie’s stunning other-dimensionly locations.

The digital phenomenon overtakes Artemis and her unit (a short-lived bunch that includes Tip “T.I.” Harris), transporting them, Dorothy style, to another desert – one that looks like Middle-earth, only with much whiter sand.

In the distance, a Mordor-like “Sky Tower” looms. Artemis and her unit drive around a bit, singing, until they happen upon a giant skeleton. Whatever this creature might have been, it was big. And whatever ate it was probably a whole lot bigger.

It won’t take long for Artemis and her team to meet this freaky sand-swimming reptile, which is, truth be told, a pretty impressive CG monster, “Diablo”. That’s what Thai martial arts star Tony Jaa (who’s referred to only as “Hunter”) calls it half an hour later, but first, Diablo has to gobble, stomp and impale a few of Artemis’ men.

They run toward the rocks, where some giant bug creatures attack (these look and act like the monsters in the vintage Vin Diesel movie Pitch Black). More gobbling, stomping and impaling ensues.

This is where Ranger Artemis meets Hunter No-Name. The two of them do not speak the same language, and the chemistry between them is... awkward. They fight, then join forces, upgrading to bigger weapons. Their goal is to reach the Sky Tower, which means crossing Diablo’s desert.

But you’re not reading this review for a plot summary, are you?

I can think of some other things that might be cut from the film, although truth be told, it would be a lot more coherent if Anderson and editor Doobie White were to put some scenes back in.

As a filmmaker, Anderson has a take-it-or-leave-it style that confounds many, but pleases enough to sustain a career making hyper-visual effects-heavy movies that play like feature-length trailers: Event Horizon, Alien Vs Predator, Pompeii and the four aforementioned Resident Evil movies.

Monster Hunter is no different in that it moves along at a steady clip, dispensing with all but the most rudimentary character details in order to maximise the stuff that excites the fans – namely, striking compositions and carnage.

Most of the time, during action scenes, you can’t tell what’s happening, but it seems to make sense to the characters, and the overripe sound design (which sounds like someone assaulting a couch with a baseball bat or smashing up the produce section at a grocery store) creates a kind of continuity through the Cuisinart cutting.

A bit more plot: After defeating Diablo, the Ranger and the Hunter reach an oasis, where they stumble upon a few more breeds of monsters, as well as another team of what look like pirates led by Ron Perlman, the Hellboy actor whose presence confers a strange kind of legitimacy on the project.

If I had to guess, I’d say that Perlman’s character, the Admiral – and his mostly nameless fellow pirates, including a human-size CG cat – are probably monster hunters from the game, whereas Jovovich is someone who has been invented for the film.

Maybe they’ve all been invented. It doesn’t really matter, because they hardly qualify as characters.

Artemis has some numbers tattooed on the back of her neck and keeps a ring with the word “Forever” engraved inside the band, but that’s just about all we learn about her.

Admiral’s team looks like they mean business, although they disappear somewhere during the final showdowns with the Rathalos, a flying, fire-breathing super-monster, so they can’t be that important.

Between the moment Artemis and Admiral set out for the Sky Tower and the scene where they reach it, Anderson gives us three long- distance beauty shots covering roughly the same amount of distance it took Peter Jackson two Lord Of The Rings movie to traverse.

This guy could tell Around The World In Eighty Days in 80 seconds. But he’s no Uwe Boll (another video game director with an even worse track record). A better comparison might be Justin Kurzel, who made the Assassin’s Creed movie.

Very little of Monster Hunter makes sense, but it’s visually interesting at least and not un-fun to see with a friend, asking questions and cracking jokes along the way. – Reuters 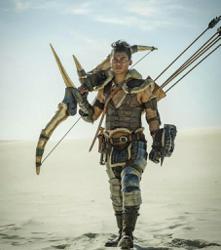