When talking doesn't work. 'Godzilla Vs Kong' is scheduled to be out on March 25. Photo: Warner Bros

Cinemas in Malaysia will resume operation on March 5 after being shut for some time.

As announced on March 2, theatres that fall under the conditional MCO and recovery MCO states can welcome movie fans to its darkened hall once again.

Similar to when cinemas started operation in July 2020, cinema-goers must adhere to strict standard operating procedure which includes temperature checks and MySejahtera check-ins at entry points, as well as usage of masks and sanitisers while at the premise. Of course, physical distancing is a must at all times.

The rule on patrons aged below 12 years old and above 60 years old not encouraged to enter the cinema premises still stands.

However, one welcomed new rule is attendees from the same household or family can sit together in the couple seat. A family of four for example, will be occupying two couple seats with a gap in between. Take note that attendees must be able to provide the right documents if need for proof arises.

To make this easier, GSC Cinemas and TGV Cinemas have existing apps while mmCineplexes will be launching its app on March 10.

Below are some of the films scheduled to be released in March.

Raya And The Last Dragon (March 5)

Co-written by Malaysian-born Adele Lim, this animation film is set in a re-imagined Earth where an ancient civilisation exist, as well as dragons. Or one last dragon, that the film’s lead protagonist is determined to find.

The movie that got the Japanese audiences back into the cinemas. Can the movie achieve the same feat in Malaysia. Find out the magic behind this anime centring on a determined demon slayer named Tanjiro, who goes to great lengths to save his sister who has been turned into a demon. Doraemon: Stand By Me (March 5)

Nobita goes back in time to meet his grandmother. When the grandmother asks Nobita to show her his adult-self getting married, Nobita and Doraemon discover that the adult Nobita is a tad irresponsible.

A horror flick with a tagline that reads: “Karma is coming for us all”. Revenge is obviously the key point of this film starring Kourtney Bell and Will Stout. Andy Lau and Xiao Yang headline this title. An unlucky person decides to end his life. But an accident he causes gives him the opportunity to assume someone else’s identity. Will his luck change now?

This flick was released during this year’s Chinese New Year period in China – after being postponed for a whole year – and it made a lot of money there.

Deadline.com reports that in the span of six days, it had earned US$1.2bil (RM4.85bil) in China, setting global benchmarks for the biggest opening day and weekend in a single market.

This film is based on a video game and it stars Milla Jovovich and Jaa. It tells of a group of soldiers transported to another world where they must fight monsters and really bad weather before they can get home.

If there's no further delay on the US side, Malaysians would get to see these two gargantuan creatures fist fight, slap each other silly and just roll around, wrestling trying to get the upper hand, while bringing buildings around them crumbling down in the process. Seriously, what’s not to love? Besides the two CGI creatures, it also features a talented cast comprising Alexander Skarsgard, Millie Bobby Brown and Rebecca Hall. 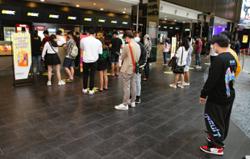