If it isn't zombies, then it's men in black that have you running in full speed. Photos: Handout

With performances, plotting and visuals amped up to 11 as per usual, this hyperactive combination of Sherlock Holmes-type sleuthing and Three Stooges-style slapstick comedy offers plenty of zany fun, but the central murder-mystery contains so many convoluted diversions, digressions and detours it makes the whole enterprise play like a long stream-of-consciousness sketch with a glaringly hollow core.

A smash hit in China after opening on Feb 12 in the Chinese New Year season, Detective Chinatown 3 has grossed US$667mil (RM2.74bil) in the three weeks since.

Earning its place in history with the highest opening-day gross of any film in a single market (US$163mil/RMRM672mil in China), the third Detective Chinatown film directed and co-written by series creator Chen Sicheng has benefited hugely by waiting a full year to enter local theatres.

The most hotly anticipated of all seven major 2021 Chinese New Year releases, Detective Chinatown 3 delivers exactly the kind of glossy, big-budget escapist entertainment that viewers are especially craving at this time.

Those hoping to be enthralled by the same kind of intricately layered mystery that the series built its reputation on may be disappointed.

To be blunt: There are not enough plausible suspects, and many crime movie buffs will find it far too easy to quickly identify the killer.

Despite being the only other person in the room at the time of Su's death, Watanabe insists he's innocent and is prepared to pay Qin and Tang one billion yen to prove it.

Studious Qin and socially inept Tang aren't the only gumshoes on the case.

It's a bright and bouncy affair at first, with a fabulous all-in brawl at Tokyo airport involving male and female flight crew, and a terrific "revolving corpses" routine at a hospital morgue among early highlights of a story that can't sit still for a minute. 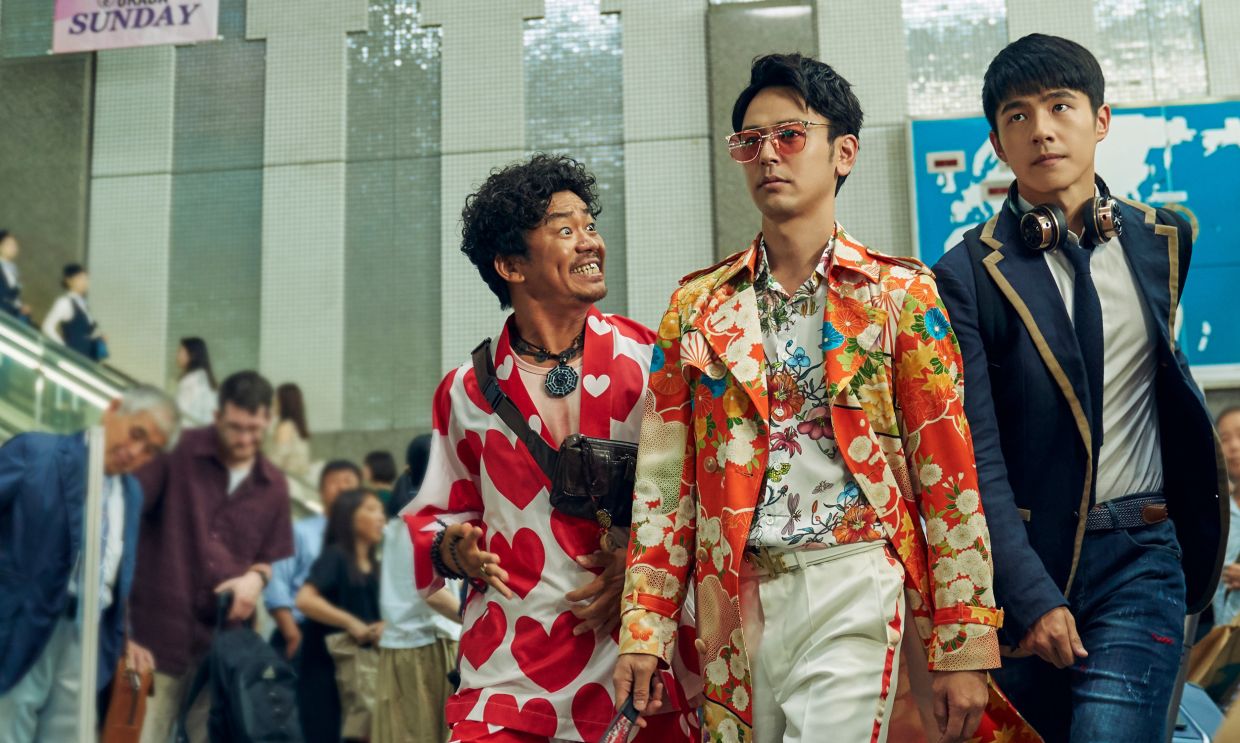 A good disguise is when you, erm, really stand out in the crowd.

During the frantic search for the imperiled woman, Cheng and his co-writers spend more time setting up potential prequel, sequel and spin-off movie threads than dealing with the case at hand.

Much of the side-tracking concerns the emergence of a shadowy Spectre-like crime cartel known as "Q."

Given the loaded meaning of that particular letter in today's political and social climate, this moniker could just as easily be a bonus or a burden for future instalments, the next of which is clearly flagged to take place in London.

When the serious business of unmasking Su Chawit's killer finally gets back on track in a courtroom-set final act, the story again suffers markedly by taking an unconvincing turn into tearjerker territory.

For all its narrative and structural shortcomings, Cheng's film is always visually arresting and frequently very funny as it switches tone and tack at the drop of a hat.

Filmed entirely and splendidly with Imax cameras by DP Jie Du (The Wasted Times), Chinatown Detective 3 is at its best in sequences such as a mad chase in the middle of a cosplay street parade, and a set piece involving a double-decker bus, mountains of cash and a swarm of frenzied pedestrians in Tokyo's famous Shibuya Crossing.

All that's missing from Tang's hilarious fight with a sumo wrestler is the detective saying "nyuk, nyuk" in homage to Curly Howard. Where do we even look at?

Costume designer Stanley Cheung must have had a ball creating a runway show's worth of colourful outfits including wonderfully gaudy drag ensembles donned by Wang, Liu, Tsumabuki and Jaa.

For a comedy that's frequently vulgar but never too gross, it's notable that respect is always shown for Japanese people, customs and culture, unlike some insensitive comic scenes in the previous New York-set chapter.

In light of the historically complex and often strained relationship between China and Japan, it's not too much of a stretch to suggest there's a measure of soft diplomacy tucked beneath the film's raucous, unruly and goofy exterior. – Reuters

​​​​​​​For all its narrative and structural shortcomings, the film is always visually arresting and frequently very funny as it switches tone and tack at the drop of a hat.