Suddenly, the girls regretted their fantasy of being in a hardcore wrestling tag-team.

Mention Fantasy Island to anyone under 40 and you would probably be greeted with stony silence, or a series of blank-eyed blinks accompanied by appropriate Cartoon Network-style sound effects.

The hugely popular series, which ran from 1978 to 1984 after a pair of TV movies, has pretty much fallen out of the pop culture conversation – so when horror specialist Blumhouse acquired the rights, it must have figured there was no harm in turning the property into a horror movie.

Which is not totally out of step.

After all, the original series had no shortage of supernatural-themed tales mixed in among its guests’ more “mundane” fantasies. Genies, mermaids, Jack the Ripper and even the Devil himself showed up.

So what’s the big deal with a few demonic beings, of the sort we get in this new version? Not much, to be frank. 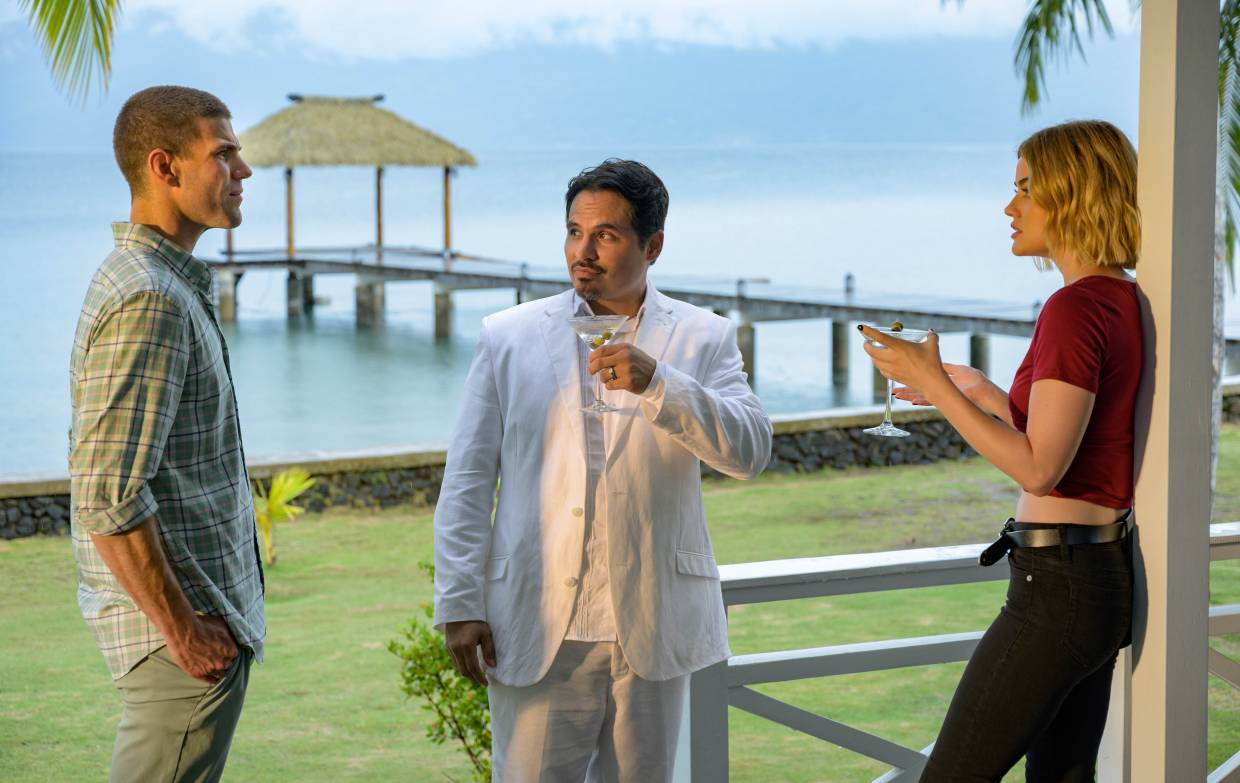 ‘It’s been a while since any of my guests had a fantasy of running a successful laundry. My suits are really getting rumpled.’

The movie’s premise is pretty much like the series. The titular island is a place that grants its guests’ fantasies (one per guest, each to be lived out to its natural conclusion), under the watchful eye of its enigmatic and possibly quite long-lived overseer Mr Roarke (Michael Pena, taking over from Ricardo Montalban – and Malcolm McDowell in the one-season 1998 revival).

The original was also known (and loved) for Roarke’s diminutive, energetic sidekick Tattoo (Herve Villechaize), whose cry of “The plane! The plane!” became famous the world over.

There’s no Tattoo in sight as the movie begins, but someone does say those words in an excited fashion – with the significance made clear at some point in the film’s clumsy wrap-up.

And to keep us oldies happy, the original series theme can be heard, though in somewhat scratchy-sounding form, twice – once over the opening studio logos and later during the movie itself, as elevator music.

Our dear guests this week, er, film are: realtor Gwen (Maggie Q), seeking to fix the greatest regret of her life; cop Patrick (Austin Stowell), who wants to be a soldier; bros J.D. (Ryan Hansen) and Brax (Jimmy O. Yang), who want “to have it all”; and bullying victim Melanie (Lucy Hale), who desires revenge on her high school tormentor.

At first, their fantasies play out like some of the watchable but instantly forgettable ones from the series.

But things soon take a dark and decidedly horrific turn with undying torturers, houses that drip dark fluids, humanoid figures that scurry in the dark (and, shudder, on ceilings)... the sort of stuff you see in the Blumhouse vanity logo before the movie proper begins.

So, it’s unremarkable but decent so far, with some mysteries to accompany the eerie goings-on: why is Roarke’s assistant Julia (Parisa Fitz-Henley) so sickly? And who is the scruffy Michael Rooker lookalike lurking in the woods? Oops, it IS Michael Rooker, but, yeah, did he accidentally wander over from Jumanji or something? 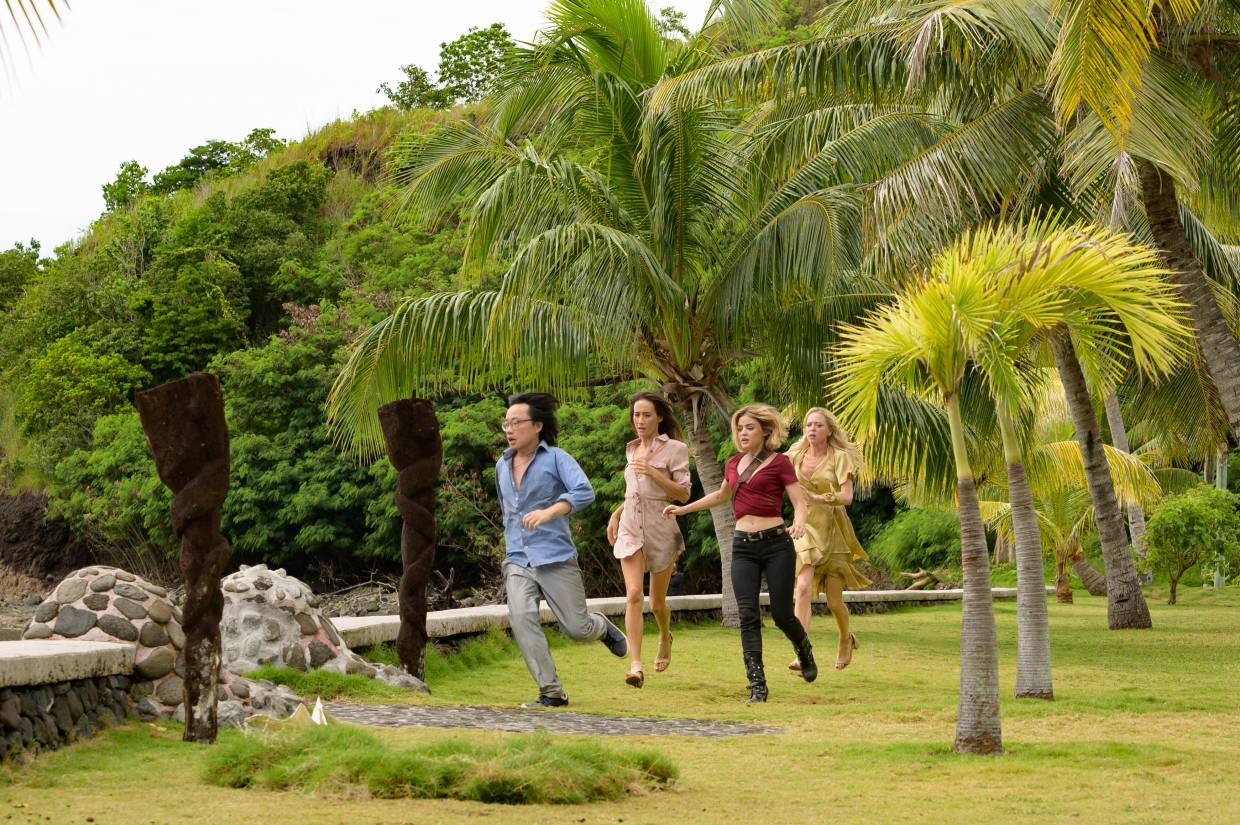 And just like that, the race for the Immunity Idol was on.

Fret not, you will get the answers to every question you have – and unfortunately, answers to questions you didn’t even ask, or want to ask.

This is because director/co-writer Jeff Wadlow (Kick-Ass 2) and his scriptwriting team felt the need to throw in a completely unconvincing twist towards the end.

This twist actually mirrors stuff that happened occasionally on the series, but it is so lazily inserted here that it just does not ring true at all.

Up to that point Fantasy Island was happily tooling around like a mostly acceptable, occasionally exciting creepshow with its own fun spin on fan-service moments (like Roarke’s “Smiles, everyone! Smiles!” to his staff at the start).

By its last 15 minutes, Fantasy Island doesn’t seem to be trying at all – not even giving its characters halfway plausible reasons for getting separated after the typical horror-movie admonition of “Stick together and don’t split up whatever happens”.

It’s good that we at least have the always-watchable Pena acting suitably mysterious and commanding as Mr Roarke, and clearly having a grand time of it. Though even he can’t salvage the cute but telegraphed and poorly scripted punchline that ends the movie. 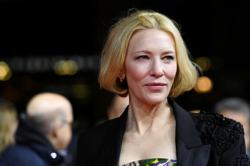 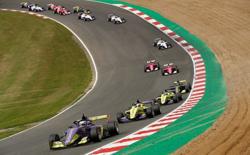