When romance period series Bridgerton premiered on Christmas Day, it quickly became one of the most-watched series on American streaming platform Netflix.

Based on Julia Quinn's series of novels, the show delves into the lives of the Bridgerton family's eight siblings and their romantic pursuits.

Given that there are eight novels, and each one zeroes in on one sibling, Collider asked showrunner Chris Van Dusen if the show could go on for eight seasons.

"This being a family of eight children and there being eight books, I would love to be able to focus and really tell stories and love stories for all the Bridgerton siblings. For each character, for sure, ” he said.

With the series gaining so much attention, there's undoubtedly a renewed interest in the novels too. Could there be more books hitting the shelves soon?

"I hadn't done a whole lot of work writing fresh stuff this past year in part because of my husband. He's an infectious disease specialist. It's a crazy time for my family," Quinn told O magazine.

"He has done over 130 interviews since the pandemic started. He's been so busy, exhausted and overwhelmed that this past year, I've been taking a little time back from work and supporting with family stuff." 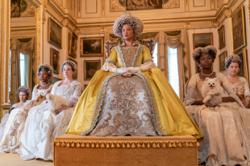