What is the fate between Daphne Bridgerton and Simon Basset. Photos: Netflix

Bridgerton is the latest show from Shondaland – the production company founded by writer/producer Shonda Rhimes who gave us Grey’s Anatomy and Scandal.

Set in 19th century Britain, the period drama centres on a group of young people born in the upper echelons of society, trying to live up to their families’ expectations of them, especially concerning their marriages and official posts, while finding their own identities.

Inspired by the best-selling novels by Julia Quinn, Bridgerton offers sweeping romances, banter and witty remarks between friends (and frenemies), as well as a look at the strong bond among siblings.

And of course, it explores society itself and how it works for or against an individual.

While all of these may seem like Bridgerton is just another historical English drama, actor Rege-Jean Page begs to differ when it was compared to Downton Abbey.

“If Downton was funnier, faster, sexier, considerably more unbuttoned, and an awful lot shinier, it might be in some way like Bridgerton, ” he says with laughing eyes, during a video interview that StarLifestyle participated in. 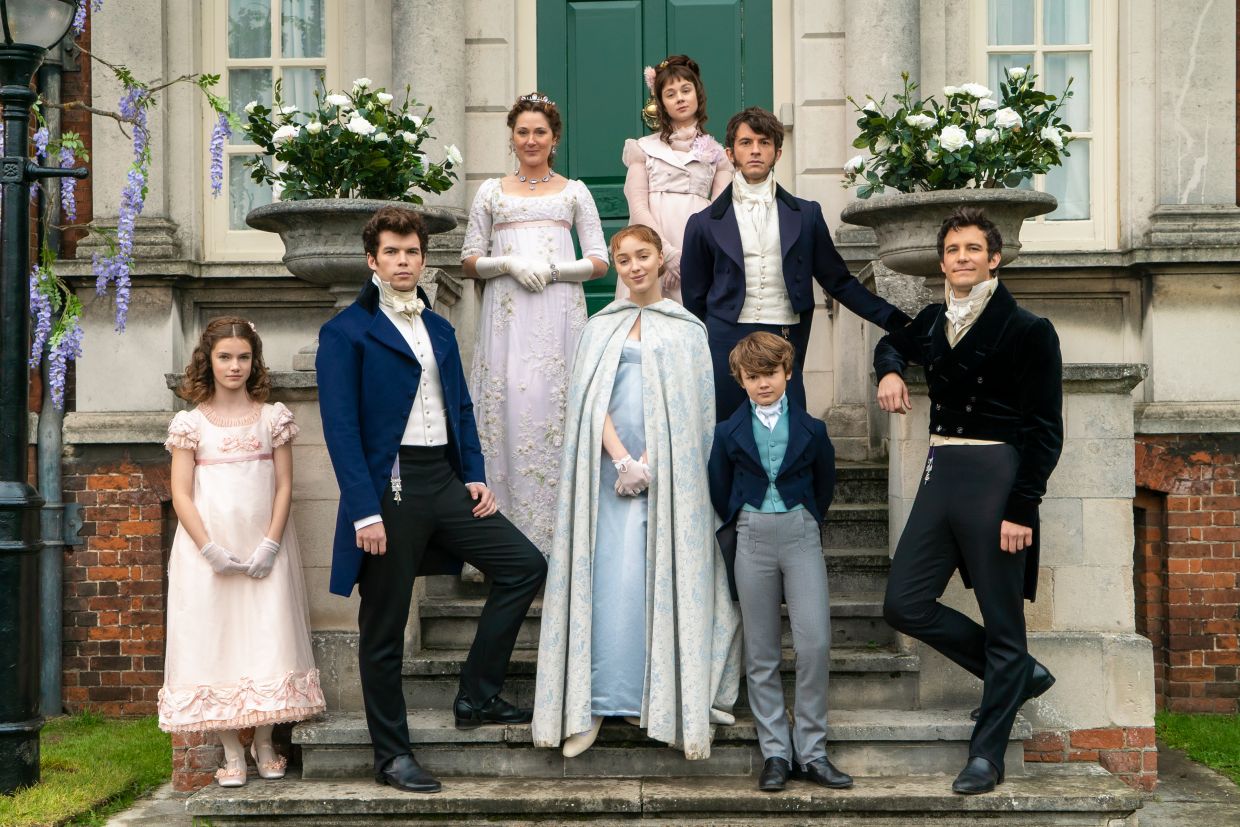 Say hello to the Bridgerton family.

Show creator Chris Van Dusen also promises that Bridgerton is nothing like what we’ve seen before.

“I love a good period piece, everything from the sets and the costumes to the world the period pieces bring to life. But at the same time, they’re often considered a little bit traditional and a little bit conservative.

“So, with Bridgerton, what I set out to do was really create the period piece that I’ve always wanted to see and that I hadn’t seen before.

“Developing the show, we really struggled to name one other show that this series was going to be like, because it really is its own thing.”

She hopes to find a husband she will truly love amongst the suitors vetted by her older brother, Anthony (Jonathan Bailey).

One man does catch her eye – the Duke of Hastings, Simon Basset (Page). Alas, he has no interest in getting married to anyone... or so he tells her. Nicola Couglan says some of the topics in 'Bridgerton' are relevant today.There is also the Featherington family thrown into the mix with Mama Featherington stressing herself out trying to marry off her rather plain daughters.

Meanwhile, all these goings-on are circulated through the high society scandal sheets written snarkily by the mysterious Lady Whistledown (voiced by Julie Andrews).

In that sense, Bridgerton is more like Gossip Girl, where the dirty laundry of New York’s privileged teenagers gets aired in public via a blog.

Similarly, despite the highly fantasised romantic genre and set at a time that’s quite different than now, there are plenty of things in Bridgerton that are relevant today, says Irish actress Nicola Coughlan, 33, who plays Penelope Featherington in the series.

The actress who also stars in the hit series Derry Girls shares: “You know, human nature doesn’t really change even though the times do.

“And with the male characters as well... dealing with the pressures of the patriarchy. So, I think it’s actually really relatable.” 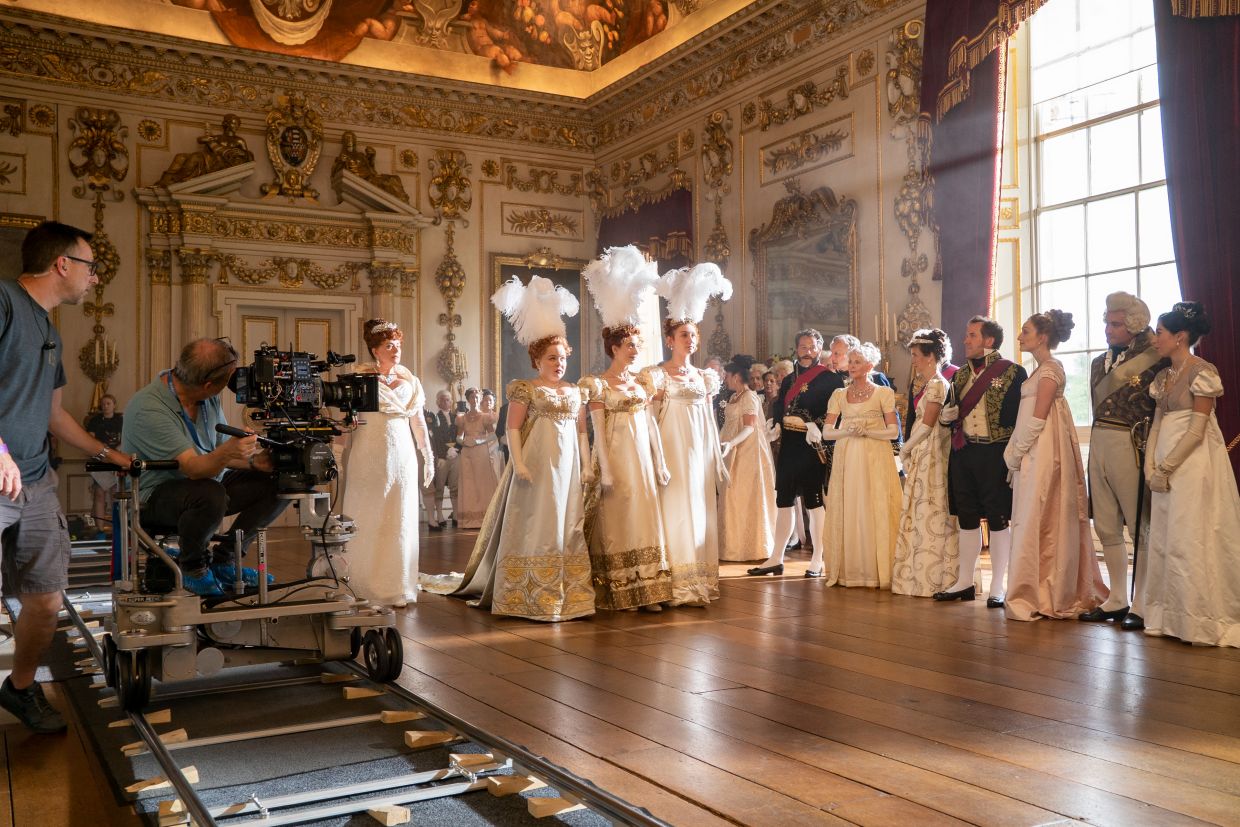 A behind-the-scene of 'Bridgerton'.

Van Dusen elaborates: “From the beginning, we knew that we wanted to make the show reflect the world we live in today. Even though it’s set in the 19th century, we wanted modern audiences to relate to it and to see themselves on screen, no matter who you are.”

Besides tackling issues that are relatable to people today, one of the ways Bridgerton has imbued a modern take to the series is by including contemporary pop songs as the show’s soundtrack features songs by Ariana Grande, Shawn Mendes and Billie Ellish.

Another is through the casting of the actors populating the series – in Bridgerton, the British aristocracy is made up of more than just Caucasians.

Van Dusen explains: “Everything on the show is filtered through our own unique modern lens. That’s true on a number of levels; it’s certainly true for our casting. We have an incredible sprawling cast.

“Having worked in Shondaland for pretty much my entire writing career, it’s what we do there. Ever since Grey’s Anatomy, we cast the best actors for the roles in ways that represent the world today.”

For example, the highly desirable and rebellious Simon, is described as blue-eyed in Bridgerton’s source material. In the show he is played by Page, who is British-Zimbabwean. Rege-Jean Page plays the rebellious Simon Basset in the series.

Page, who starred in the 2016 mini-series Roots, touches on the welcomed change to StarLifestyle: “I think that it’s exciting that we live in a time where we are able to serve a wider audience than we’ve ever served before.

“So, all you have to do is flip the camera around, point the camera at us, and you can tell our stories. That’s exactly what we did.

“So, I think it’s very simple and very joyous.” 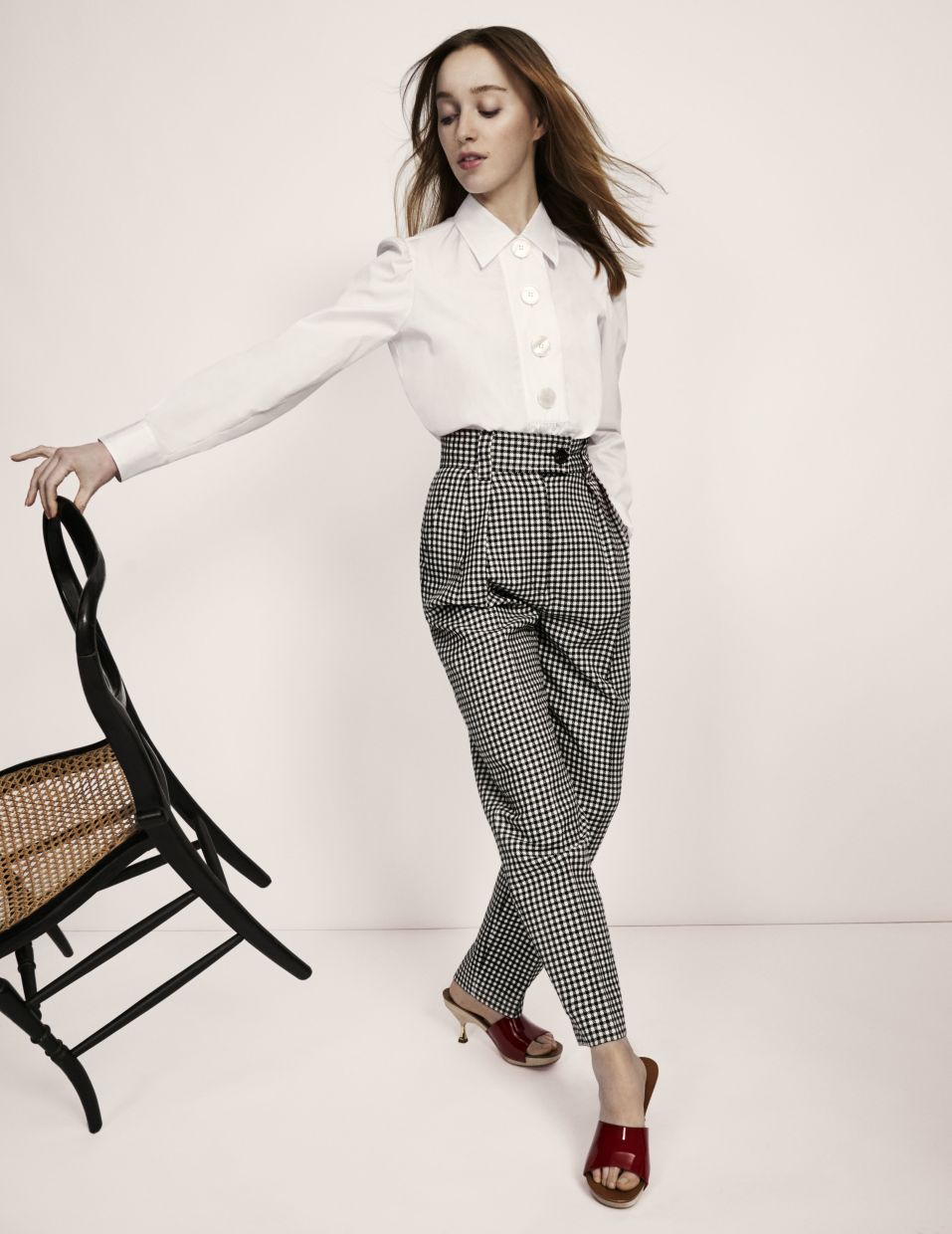 Phoebe Dynevor couldn't forget the first time she walked onto the warehouse where the costumes were.Although there are a number of changes from Quinn’s novel – including new characters and narratives – the production took every opportunity to keep the look, the set designs and the costumes rooted in Regency fashions and the Regency time period.

The amount of work put into creating this era is obvious from the very first episode.

English actress Dynevor, 25, remembers walking into a huge warehouse for costume fitting and being in awe of the number of people working on the outfits for the series, as well as the size of the production.

“That was the first moment I just sort of realised the whole scale of it... that this is massive and I’m playing Daphne Bridgerton.

“The costumes really helped sort of bring it all to life. I mean, it was a pretty overwhelming experience, and very exciting, ” she notes of her initial participation in the series. 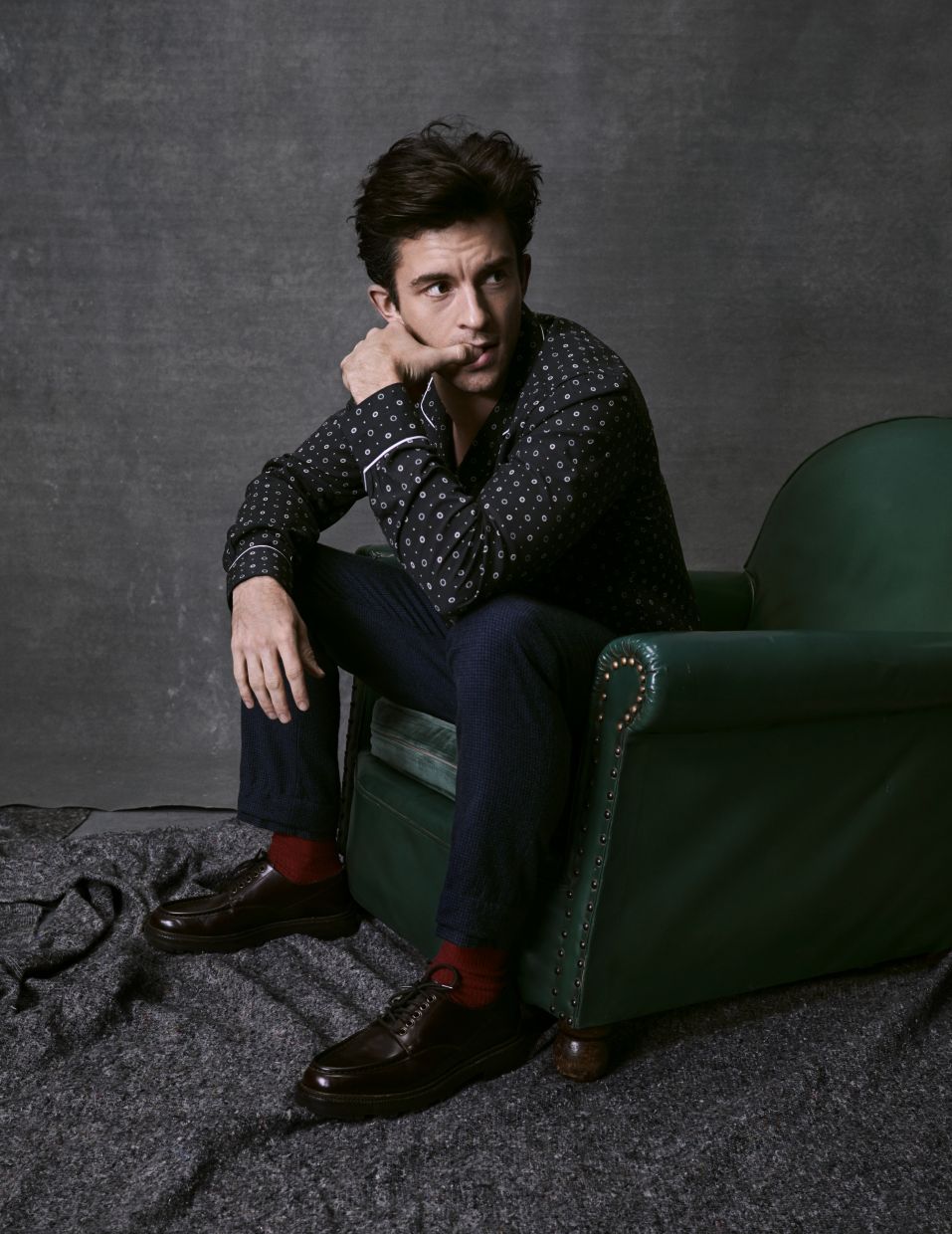 The 32-year-old says: “When you’re doing a period drama, it’s so visual. And walking and seeing, you know, the streets and massive drawing rooms and amazing artworks that are (London’s) Grosvenor Square in the back..., which you see for a flash of a moment through a window, every detail is all there, it just was amazing.”

With so much effort poured into making this detailed world, Bridgerton has already been renewed for a second season.

According to Van Dusen, the show has surpassed any expectations he had, thanks to the cast and the crew. “I couldn’t be prouder, ” he says.

He carries on: “Bridgerton is a show about love. And I don’t think there’s really anything more universal than that. It’s an escape, that’s what attracted me first to the books – I was looking for an escape and I certainly got that.

“I think that’s what a lot of audiences right now are looking for as well.” Friends Penelope and Eloise having a heated conversation about fashion.

‘Where the Crawdads Sing’ review: A compelling mystery that tries to do too much
Brad Pitt is still in love with Japanese smart toilet: 'The water feature is just a gift'
Adrian Pang and other local actors appear in K-drama Little Women’s Singapore scenes
'I’m not ready to have sex with you': Actress Constance Wu recounts being raped by aspiring novelist
US actress Robin Wright files for divorce from third husband
Hugh Jackman is returning as Wolverine in 'Deadpool 3,' Ryan Reynolds says
'I lost everything': Actress Tiffany Haddish says child sex abuse lawsuit upended her career
Singer Shakira to stand trial in tax fraud case in Spain
Law Lan, 87, beats Roxanne Tong and Aimee Chan as TVB's most well-liked actress in online poll
Singaporean actor Duan Weiming reconciles with daughter after over 10 years of estrangement