Country group Old Dominion took an early lead at the Academy of Country Music Awards, winning song of the year and group of the year, as they acknowledged how the empty seats in front of them reminded them of people who they had lost.

The awards show on Sept 16 aired from empty venues in Nashville, Tennessee, with no fans and no applause, even when winners got up live to accept their awards.

Matthew Ramsey, lead singer of Old Dominion, said the empty venue and quiet made him think of friends and family they had lost.

"I can feel them all, ” Ramsey said on the stage of the Grand Ole Opry House as he accepted the award for song of the year for One Man Band.

"They are so proud, and it’s such an honor to receive this in their presence.”

Luke Bryan, Eric Church, Luke Combs, Thomas Rhett and Carrie Underwood, all vying for entertainer of the year, sang to empty seats and no applause at the Grand Ole Opry House, the Ryman Auditorium and the Bluebird Cafe.

The show was delayed from April due to the COVID-19 pandemic and the tone for Sept 16's show airing on CBS will be more serious that in years past.

Host Keith Urban noted all the changes this year for the show and for the country in general, saying 2020 has been an "unpredictable and unsettling year.”

After noting wildfires on the West Coast, hurricanes in the South, Urban said the country is battling two pandemics: COVID-19 and social injustice.

"Far too many lives have been lost to both, ” he said. "But the examples set by essential workers, our first responders, along with the voices crying out for equality in all walks of life, have echoed around the world and right here in our country community.”

The show is being rebranded as a "night of heart and hits” that will also reflect how hard the pandemic has hit many people this year, especially in the music industry.

Miranda Lambert performed a stripped-down version of her No. 1 song Bluebird, at the Bluebird Cafe in a blue fringed shirt and a sparkly belt.

Lambert’s vocals seemed to fill up the space in the tiny songwriters' club surrounded by tables and chairs, but no fans.

Taylor Swift, who got her start as a country artiste, returned to her roots and gave her performance of Betty off her latest album, folklore. Her performance also ended without the usual applause.

Carrie Underwood sang a tribute to iconic female Opry members, including Patsy Cline, Reba McEntire, Martina McBride, Barbara Mandrell, Loretta Lynn and Dolly Parton. The entertainer of the year nominee effortlessly breezed through snippets of classics like Crazy, You Ain’t Woman Enough, Why’d You Come in Here Lookin’ Like That, and Fancy.

"They are some of my heroes and I am so honored to stand alongside them as a fellow member of the Opry, ” said Underwood, who sang her heart out to a venue that flickered with lights where people should have been. – AP 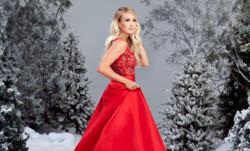