The Malaysian animation studio, Animonsta Studios, revealed some of its upcoming projects during a recent virtual conference.

Animonsta Studios, better known as Monsta, is the producer behind the animated series BoBoiBoy, Papa Pipi, Fly With Yaya and the upcoming series Mechamato.

During his presentation, Monsta CEO Nizam Abdul Razak said that the company is currently working on its next animated feature, Mechamato Movie, which was originally planned for 2020.

However, since BoBoiBoy Movie 3 was scheduled in line with the 10-year anniversary of the successful franchise, Nizam said Monsta will be releasing a one-hour BoBoiBoy Galaxy Special instead to commemorate the milestone.

Mechamato Movie centres on the adventures of a boy named Amato who teams up with MechaBot, that has the power to turn any object into a mechanical item. to fight any evil forces threatening their hometown.

The series Mechamato is said to premiere sometime this year, and will be available not only in Malaysia, but in Japan, South Korea, Australia and Japan.

Actress Talitha Bateman was 'shocked' when hired for ‘Away’

Is Malaysian actress Daniella Sya too sexy for social media? 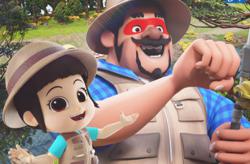 Keep the ocean and river clean with Papa and Pipi