The 20-year-old from Perak first gained fame in 2019 when a video of her rapping went viral. She had appeared on Joe Flizzow’s programme 16 Baris, rapping while wearing a hijab and baju kurung.

In her first film, she plays a young woman named Bunga, who loves hip hop and wishes to become an artiste one day. Luckily for her, her best friend Kahoe (Naim Danial) believes in her dream and tries to help her.

Although she is often told her image is not suitable for the hip-hop world, she holds on to her identity.

Further challenges come her way when she learns that her father’s financial situation is less than ideal. Along the way too, she meets lawyer Shaq (Ben Amir) who comes to her aid. 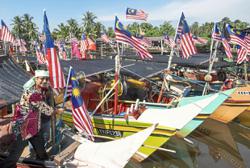