Bong Joon Ho, right, reacts as he is presented with the award for best picture for "Parasite" from presenter Jane Fonda at the Oscars on Sunday, Feb. 9,2020, at the Dolby Theatre in Los Angeles. Looking on from left are Song Kang-ho and Kwak Sin Ae. Photo: AP

Parasite made history at the 92nd Academy Awards on Sunday night, becoming the first foreign language film to win best picture. The victory caps off an improbable awards season run for the South Korean thriller. It's one that saw the story of four grifters who infiltrate a wealthy family cross cultural and language barriers to become a commercial and critical smash.

It's also a win that few saw coming. Heading into the night, 1917, Sam Mendes' bold and ambitious one-shot World War I epic had been expected to add best picture to an awards chest that already included top wins at the Golden Globes, Producers Guild, and Directors Guild awards. Instead, that film's four prizes came in technical categories.

"I thought I was done for the day and ready to relax," Bong joked as he accepted his director prize. After saying he wanted to Texas Chainsaw the golden statue and share it with his fellow nominees, Bong declared himself,"bloody ready to drink until morning."

Joker's Joaquin Phoenix nabbed best actor for his work as a failed comic who turns to crime, while Judy's Renee Zellweger was named best actress for her chameleonic transformation into Judy Garland.

It was his first win after three previous nominations. Phoenix urged the audience to embrace animal rights and other social causes.

He closed his speech, quoting a song lyric written by River Phoenix, his older brother who died of a drug overdose in 1993 at the age of 23. "Run to the rescue with love and peace will follow," Phoenix said, choking back tears. 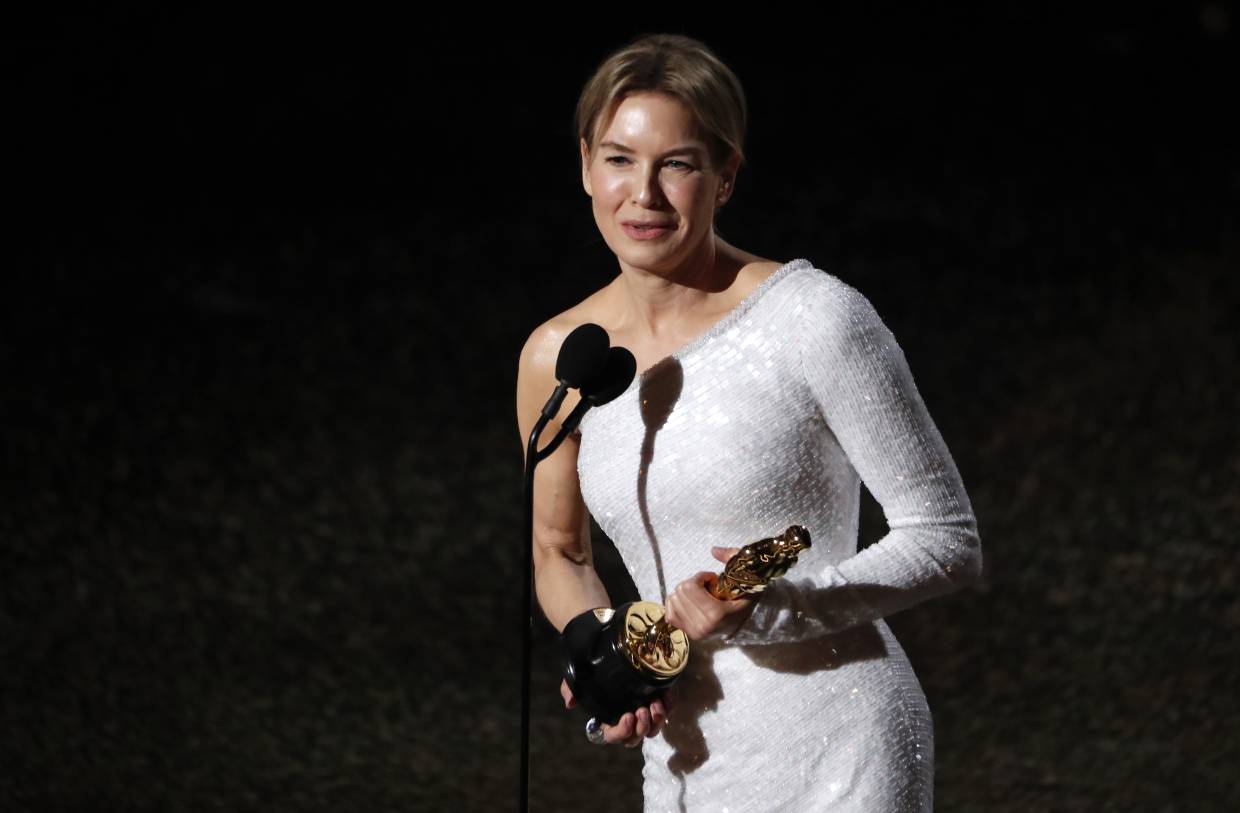 Zellweger had previously won an Oscar for her supporting turn in Cold Mountain. She used her speech to praise Garland's legacy and to leak her story to those of other barrier-breakers such as Neil Armstrong and Harriet Tubman.

"Our heroes unite us," said Zellweger. "[They are] the best among us who inspire us to find the best in ourselves."

It was a broadcast the mixed agitation for greater representation on screen and calls for wider civic action with musical performances from Eminem and bleeped jokes courtesy of Ray Romano. It is Pitt's second statue, having previously won for producing 12 Years A Slave, and his first for acting after three prior nominations. Pitt thanked the film's writer and director Quentin Tarantino.

"You are original," Pitt said. "You are one of a kind. The film industry would be a much drier place without you." He also struck a political note both on stage and in the press conference backstage, slamming Senate Republicans for not calling witnesses during the recent impeachment trial of Donald Trump. "I think when gamesmanship trumps doing the right thing, it's a sad day, and I don't think we should let it slide," Pitt told the media. "I'm very serious about that."

Dern scored her first win after two prior nominations. She thanked her parents, the Oscar-nominated actors Bruce Dern and Diane Ladd, as well as Marriage Story's writer and director Noah Baumbach.

"Noah wrote a movie about love and about breaching divisions in the name and in the honour of family and home and - hopefully for all of us - in the name of our planet," said Dern. Her's is the first acting statue ever awarded to a Netflix film. Taika Waititi nabbed a best adapted screenplay prize for Jojo Rabbit, a World War II satire about a young boy living in the waning days of Nazi Germany. Waititi, who is of Maori descent, used his time on stage to dedicate his award to "all the indigenous kids in the world who want to do art and dance and write stories. We are original storytellers and we can make it here as well."

American Factory, the story of a Chinese company that opens a factory in Ohio, won best documentary. The film is the first produced by Barack Obama and Michelle Obama's production company, Higher Ground Productions. Julie Parker Benello, the film's co-director, sounded an activist note. "Working people have it harder and harder these days," she said. "And we believe that things will get better when workers of the world unite."

In another milestone, Hildur Gudnadottir became only the fourth woman to win an Academy Award for best score and the first in 23 years for her atmospheric work on Joker.

This year's contest is taking place in a period of change and tumult in the movie business. The Walt Disney Company has subsumed much of 21st Century Fox and stripped the company of its Fox moniker, WarnerMedia is adjusting to life under its new corporate parent AT&T, and most of the major studios are preparing to wade into the streaming realm.

Last November saw the launch of Disney+, and WarnerMedia and Comcast are joining the fray with the upcoming debuts of their Netflix challengers: HBOMax and Peacock. Quibi, the most unorthodox of these new challengers, used the Oscars telecast to promote itself in ads hawking its platform. The company, which is being run by Jeffrey Katzenberg and Meg Whitman, plans to produce 10-minute episodes of high-quality, big-budgeted content.

With an eye towards the increased competition, Netflix has been working to establish itself as a destination for auteurs such as Martin Scorsese (The Irishman) and Noah Baumbach (Marriage Story). That's resulted in a lot of awards attention. Netflix leads the field for Oscar contenders with 24 nominations. The Oscars have received a great deal of criticism for their failure to nominate female directors and people of colour. Only one acting nominee, Cynthia Erivo for Harriet, is black and no women directors were included among the nominated filmmakers.

Only five female directors have ever been nominated in the Oscars nearly century long history, and only one, The Hurt Locker's Kathryn Bigelow, has won. In a piece of haute couture protest, presenter Natalie Portman wore a Dior cape embroidered with the names of women such as Greta Gerwig (Little Women) and Lulu Wang (The Farewell), whose movies last year were snubbed in the directing category. It was also a topic that came up in several acceptance speeches.

"Representation matters deeply," said Karen Rupert Toliver, the director of the best animated short Hair Love, the story of a black man who must do his daughter's hair for the first time. "Especially in cartoons. Because in cartoons that's how we first see our movies and it's how we shape our lives and how we think about how we see the world."

The broadcast went host-less for the second year in a row. The 2019 telecast dispensed with an emcee after the original choice, Kevin Hart, stepped away in the wake of controversy over his past homophobic tweets. It didn't hurt the ratings. Some 29.6 million viewers tune in, an increase of 3 million viewers from the all-time low ratings in 2018. The broadcast kicked off with Janelle Monae and Billy Porter singing A Beautiful Day in the Neighborhood and Come Alive, with original lyrics dedicated to the night's nominees. Monae peppered her opener with nods to the lack of diversity among the nominees, praising the women directors who made "phenomenal films," and noting that she was proud to be a "black queer artiste telling stories."

"They don't really have hosts anymore," Martin said. "Why is that?"

Stars dressed to impress at the 2020 Oscars