Jack Malik (left) and Fasyali Fadzly in 'Hawa Brehi', an online poetry/performance series that will be released every Saturday starting June 5. Photo: Handout

Is Hawa Brehi a book teaser trailer, a poetry performance video or an experimental project? It is fair to say that it sounds like a mix of all of the above, and more.

This art-video project, an initiative by Projek Rabak and P.O.R.T (People of Remarkable Talents), with support from Dana Kreatif Perak, is a three-part poetry performance by Jack Malik with guest artists and their artistic expressions in response to this reading.

The videos will be released over three consecutive Saturdays at 9pm on Projek Rabak’s Facebook and YouTube channel, starting June 5.

It is directed by Projek Rabak’s founder Mohd Jayzuan, with editing by Mohamad Lutfi.

“Hawa Brehi was inspired by the late Rahimidin Zahari’s poetry book, Laut Tujuh Gelombang Buih, and the late Rosliham Ismail (better known as Ise) art/recipe book Langkasuka. Both these works prompted my own exploration of my Kelantanese roots and experiences, ” says Jack, whose parents are from Kelantan.

“Mohd Jayzuan, my mentor from Projek Rabak, suggested that we do something different instead of just another poetry project. So we decided on this collaboration with traditional music, performing arts and visual arts.

"Hawa Brehi is a mixture of different disciplines, it is contemporary work fused with traditional elements. Besides that, I took the opportunity to introduce a few Mak Yong/Main Puteri terms into contemporary poetry in this project. It felt like a natural transition for me to expand something outside literature, ” he says.

Jack, whose real name is Muhammad Danial Malik, is known in the art circle as a poet and spoken word artist, but he is also a translator and has a day job as a cook.

Born in Ipoh and currently based in Negri Sembilan, the 28-year-old had his most recent collection of poetry, Sajakjakja(c)k published last year.

In the first video that will be aired this Saturday, theatre playwright/director Fasyali Fadzly will be playing the rebab, with Jack reciting one of his poems.

In the coming weeks, performance artist Meor Hailree and visual artist Ranerrim will be bringing their own artistic style and impressions to the table.

“All three guest artists responded in a way that I never imagined, especially Ranerrim's piece - she really grasped the Rabak ethos with this work. As for Fasyali, this is quite special because it is probably the first time he is showcasing his rebab playing in a proper project. Not many people know he can play the rebab!” says Jayzuan.

The initial plan was to travel to every artist’s location to shoot on-site, but this idea had to be ditched due to the dire pandemic situation and travel restrictions.

“So I asked Jack to set up a batik-based interior and wear a quirky outfit, a rojak between traditional and modern style. He recorded his reading, then I sent the video of this reading to the three guest artists and told them to respond to the poetry using their artistic skill and vision. I then stitched things together and tried to fit their performance with Jack's reading. It is quite experimental in a way. All the artists don't have the chance to see the videos just yet. They all have to wait for it to be released online, ” he adds.

The poems, written by Jack, will be included in his upcoming poetry book.

Much of the magic of Hawa Brehi, according to Jack, is due to the wonder of collaborative work.

“For this project, I would like to extend my deepest gratitude to P.O.R.T. Ipoh and Projek Rabak. Also, Pusaka, for helping me with Hawa Brehi’s manuscript via last year’s February field trip to Kuala Besut which enriched this work.

"I hope that Hawa Brehi will help prompt new ways to explore poetry, and that the audience, specifically people from the literary world, will write more about their own cultures, roots, hometown and so on. I also hope it will open more doors for future collaborations and collective work, ” concludes Jack. 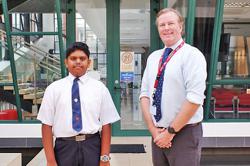