Harry Potter creator J.K. Rowling has revealed a two-week battle, now over, with a probable case of coronavirus, she said. – Reuters

The British writer has revealed a two-week battle, now over, with a probable case of coronavirus, she said.

“For last 2 weeks I’ve had all symptoms of C19 (tho haven’t been tested), ” she tweeted Monday. “I’m fully recovered.”

Rowling also posted video of breathing exercises recommended by her husband, who is a doctor, that she said “helped me a lot.”

All this not long after “Lord Voldemort” — really a fan site in Portugal that Rowling responds to in jest — tweeted at the author to “stay safe” during the pandemic, as Business Insider reported last week. She responded, “Thanks Voldy, ” with a heart emoji.

With her current revelation, Rowling joins a growing list of celebrity coronavirus cases that includes Tom Hanks and his wife Rita Wilson, Idris Elba and Pink, among others.

Also during the past two weeks, she has launched a site aimed at magically zapping boredom for kids in quarantine, called Harry Potter at Home, reported Huffington Post. Rife with quizzes, articles, videos and puzzles, it promises to “cast a Banishing Charm on boredom.”

She also announced that “Harry Potter and the Philosopher’s Stone, ” the first book in her famed series, will be downloadable for free all over the world as an e-book and audiobook throughout this month, Reuters reported. It’s another facet of her assist for parents, carers and teachers entertaining cooped-up kids.

Harry Pottering around at home? Rowling to rescue bored kids in lockdown 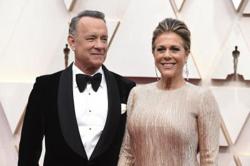