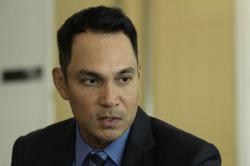 “I can finish all of this – no problem, ” says Izzat, who is better known by his YouTube persona Isaac Osman.

In Malaysia, Isaac is something of a mukbang phenomenon, having amassed nearly 250,000 YouTube subscribers in just over a year of making mukbang videos.

Interestingly, Isaac’s foray into the world of mukbang started because he is a serious athlete who cycles (he has cycled from KL to Singapore before) and trains for marathons and, consequently, is perpetually ravenous.

“And because I ran and trained a lot, I was always very hungry. So basically I figured out that I could eat a lot, ” says Isaac. Isaac can eat up to 5,000 calories a meal for his videos but is also a serious athlete who cycles and trains for marathons.

From his early days as a mukbanger with only 60 subscribers to his name, Isaac has put in a lot of effort into ensuring his channel’s continued success.

To begin with, he does a lot of research into existing mukbang trends and eats whatever is trending, so as to fully capitalise on the market.

“Actually when you make YouTube videos, you also learn what the current trends are and what people like to see. Sometimes the trend is to eat cheesy things, so I will look for cheesy food.

“It’s not about what you want to do. Sometimes I might have an idea that I feel is interesting, but when I do it, there isn’t good reception, because people don’t like seeing it, ” he affirms.

Isaac says, at the moment, the mukbang videos that get the biggest hits are those of him eating anything spicy.

“If it’s something spicy, you pretty much have a confirmed viewership. And the hotter it is, the more people want to see it. Like if you’re tearing and sweating from the heat of spicy food – that’s what people like to see, ” he says.

As his stomach capacity has expanded, so too has his ability to eat. These days, Isaac is easily able to polish off 4,000-calorie meals, sometimes even extending this to 5,000 calories a meal.

He also makes it a point to finish all the food on display in his videos – mostly because this is what people are looking for and also so that he doesn’t waste the money spent on the food, which can total RM150 for one video. “My audience really likes my channel because I eat a lot and I can finish it. As far as I know, in Malaysia, there are no other YouTubers who can eat as much as me, ” he says.

Isaac’s current personal bests include being able to consume 4.5 litres of water, or 11 pieces of McDonald’s spicy fried chicken, or two whole chickens, or 10 personal pizzas – in one sitting.

“Actually, our stomachs can expand, so when you are used to eating so much, you will definitely adapt lah. The more you eat, the next time, you can eat even more, ” he says.

To make his videos as appealing as possible, Isaac has invested over RM2,000 on a camera, tripod and other equipment. As he still maintains his full-time job as an exhibition booth designer, he only makes these videos on weekday nights after work or on weekends.

Each meal typically takes him up to 45 minutes to finish, after which he spends about five hours editing it down to a 10-minute video, often burning the midnight oil to get a result he is happy with.

But he remains dedicated to being a prolific content producer, churning out a steady three videos a week. Because people are fascinated with watching him eat, Isaac challenges himself to eat more and his record to date includes being able to eat two whole chickens in a single sitting!

“I’m very consistent, so you just imagine – if people see me eating so much on Monday and then again on Wednesday, they’re like, ‘Hah, how is he doing it?’ But in reality, I’ve pre-shot it, so I can space out posting the videos. There are even some videos that I shot one month prior, ” he says.

Isaac’s sense of discipline also extends to maintaining his figure, something he does through a combination of diet and exercise.

“Actually, a lot of people ask me this – how do you eat a lot but you don’t look so fat? The thing is, for example, if I eat a meal that has 5,000 calories, that’s two days worth of calories for a regular person. So what I do is, a day before I shoot the video, I might just eat vegetables or reduce my food intake so the things I’m eating have very little calorific value.

“So I have a calorie deficit, which I save up for the next day. Some days, I also do intermittent fasting to prepare for a shoot, ” he says.

Isaac has also continued his stringent exercise routine. Twice a week, he cycles to and from work – a total distance of 18km, or as he puts it “Tak jauh pun!”

To date, Isaac has consistently received a clean bill of health when he has been to see his doctor, although he admits that he does wonder about the long-term effects of the vicious cycle of binge eating and clean eating that he has been putting his body through for the past year.

“Even though I look fit and healthy now, sometimes I do wonder if I’m really healthy, ” he says contemplatively.

But still, the rewards continue to outweigh the risks, for Isaac. At the moment, he is raking in quite a lot of money (he won’t say exactly how much) but the side income is so good that Isaac says he would have done it 10 years earlier if he had known how lucrative it was going to be. Isaac's wife Izzati Mazlan is very supportive of his side career and often helps him film when they go overseas.

Despite his success, Isaac understands that he has a responsibility to his audience, the bulk of his fans (about 70%) being between the ages of 15 and 25. Which is why he is aware that he needs to reinforce the idea that what he is doing shouldn’t be copied by impressionable young people.

“In my videos, I actually say from time to time, ‘This video is for entertainment. So when I’m eating very spicy food, I will tell people, ‘Don’t attempt this at home’ or something like that. I consider myself to be trained – this is not for everyone.

But having tasted success (quite literally), Isaac is hungry for more and is hoping to eventually make mukbang videos full-time.

“I think I will do it full-time but I’m not sure when. I have a dream to have a proper studio and a production team, just for mukbang videos, ” he says, eyes alight with hope.