Next year, the pandemic will continue to delay the return to restaurant dining and encourage more healthy homecooking but it’s unlikely insect eating will take off. Photo: 123rf.com

It is difficult to focus on Christmas this year especially as most of the EU countries are going deeper and deeper into lockdown mode against the coronavirus. In many parts of several European countries, Christmas is now effectively cancelled, at least the gatherings of family and friends that we normally associate with this time of the year.

I have reviewed some recent writings about food trends for next year and selected some of the more plausible/interesting ideas. By next year, most people would have adapted to the circumstances imposed by the preventive vigilance against Covid-19 and hopefully life would then be less of an upheaval.

One probable trend is there will simply be fewer restaurants, especially venues with high rents and other overheads. The hugely reduced custom this year would have already eliminated a significant number of dining venues. There may be more bad news next year as it is unlikely all the restrictions currently in place would be fully lifted, hence affecting survivability especially when current government financial assistance options stop. Making matters worse for top chefs is the trend away from quality fine dining to good, solid comfort food like top-notch burgers, roasts, etc.

Furthermore, sanitation requirements will mean fewer buffets and sharing platters. And much less personal interaction/service – eg, no more waiters convivially chatting over the menu, fewer sommeliers pouring the wine, etc. There will be more use of no-touch or electronic ordering menus (eg, via apps, QR codes or barcodes), electronic bills and contactless payment options.

Places will still look like restaurants but with a different feel and probably more spacing between tables. It will be a fine balance between creating a “warm, happy, social experience” and meeting health guidelines. Many venues will lose that special ambience, conviviality and social attractiveness which makes them worth the time and cost to visit. 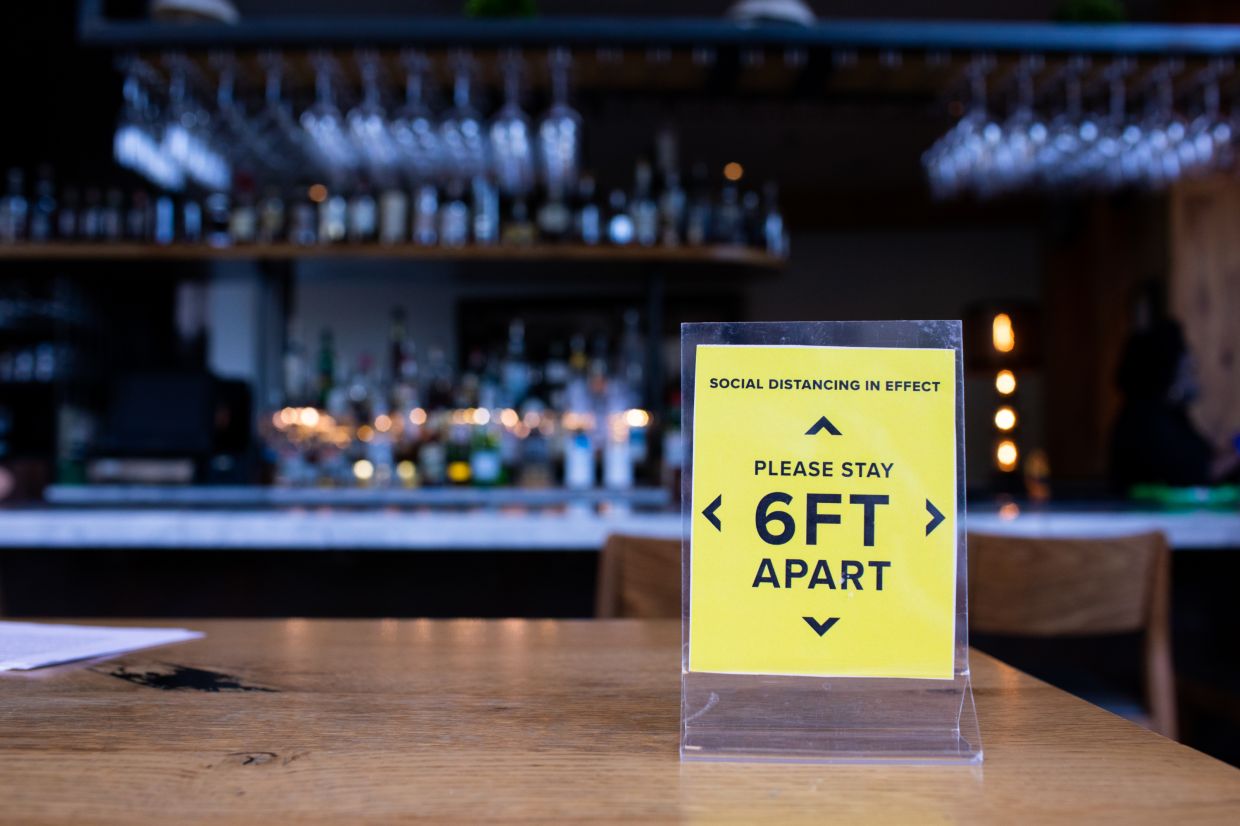 A happier trend is the expansion of both home cooking and home dining activities, which are not necessarily the same thing. The number of searches for online recipes has gone ballistic this year as people looked to relieve boredom at home and save some money by trying out recipes. This trend is likely to continue into next year but with a new twist as people begin to experiment with new/more spices and ingredients as competency in their new-found culinary skills grow.

There are indications that Korean and other Asian dishes may become more popular as home-cooked meals here in the EU as people who cannot travel physically are now travelling via their senses through foreign spices and unusual ingredients. This year, odd items have sold extremely well; for example, sales of Chinese rice vinegar was up 194% and mirin rice wine was up 188%.

Surveys have indicated that 74% of US citizens found cooking to be a good coping mechanism during lockdowns. Additionally, 44% claimed to have learnt at least one new recipe and 32% have taken online cooking classes. As such a huge demographic is involved, momentum alone suggests the home cooking trend will continue into next year.

Incidentally, I made curry laksa at home recently for some friends. They apparently loved it so much that they began cooking South East Asian curries at home, something they would never have done if not for the confinement (or possibly my laksa). The costs of the ingredients are high here in France, but still very much cheaper than a flight ticket, assuming that option is even available.

Due to my remote location, I cannot get food deliveries but friends in KL tell me that they enjoy having a wide range of professionally cooked dinners delivered for home dining.

The next trend appears to be a healthy battle against food waste. This does not necessarily only mean less food thrown away from home fridges (though there is a strong element of this) but it also means restaurants and food producers connecting more with deprived people offering free or discounted meals/food as some form of a community service. It had been a minor trend in Europe for years but it has certainly accelerated during the pandemic this year and will likely continue into next year.

Perhaps it is the link between proper nutrition and a sound immune system, or maybe it is the realisation that current food production systems cannot continue without severe consequences (such as anti-microbial resistance, potential future pandemics, etc), but people are more likely to be focussed next year on the quality of the nutrition from food, rather than taste or price.

As a lot of tasty, cheap food is processed gunk, this implies a widespread trend away from unhealthy low-priced food to higher-quality nutritious (fresh) foods produced without industrial additives/chemicals, and preferably sustainably. In the USA, fully 54% of all consumers (including 63% of those aged above 50) now believe healthfulness is the primary criteria for food selection. This is a significant change of sentiment from only a few years ago, and it is certain the pandemic had a strong influence.

It appears that drinking at home, alone or otherwise, is a big trend this year. In the UK, spending was up £2.1bil for alcoholic drinks, with a large chunk of it spent on lager. This trend is likely to increase next year as people forego the risks and higher costs of drinking in pubs, clubs and other social venues.

Expenditure on meat consumption is up slightly this year in some countries, bucking the trend of the last few years. For example, in the UK, meat sales grew by almost £440mil (RM2.4bil) as people found meat the easiest tasty ingredient for cooking at home. The best-selling meats include beef, sausages, chicken and bacon.

To put this into context, people in the UK on average have spent an extra £7 (RM38) on meat this year, hardly a surge in demand. On the other side, sales of processed chilled/frozen meals fell as more people started making meals from scratch at home.

This tiny rise in meat consumption is not expected to continue as people veer back towards healthy plant proteins and other non-meat options, perhaps as their culinary skills improve. There will also likely be a further rise in the numbers of flexitarians and vegetarians/vegans, possibly for health reasons as people seek to manage their weight and prevent health issues.

Prior to the pandemic, people in the United States were mooching around supermarkets and food stores around 2.3 times a week, spending about 20 minutes per visit. Now this has dropped to less than once a week. If, and when, the pandemic eases next year, the trend will not rebound to previous levels as online shopping and food delivery services would have turned into a way of life for many people. Hence impulse food buying will be reduced, especially as 14% of US consumers are worried about food affordability and 68% are actively cutting back on food purchases.

Oddly, this means the average consumer is now more focused on trusted brands, and less likely to purchase or experiment with new brands, unless they are more exotic items. This may be the consequence of fewer physical shoppers having tastings and trying out samples in supermarket aisles and shops.

There are suggestions, as for every year, that insect-based foods will finally become mainstream. Perhaps this may happen but the growth in consumer acceptance of insect-based foods in the West has not picked up even during the pandemic. There are also not many places that sell such foods either, so it is unlikely that entomophagy (eating insects) will catch on so quickly. Saying that, 2.5 billion people around the world are eating insects, but it remains to be seen when the remaining five billion people will join in. Probably not by next year.

There is an interesting suggestion mushroom consumption will explode next year. Sales went up 20% in the UK this year to 25,000 tonnes, partly because health-conscious consumers snapped up mushrooms for its vitamin D content and other home cooks are also appreciating their versatility, flavours and textures. The food industry is responding by offering vitamin D-enriched mushroom varieties, along with other more exotic fungi so this is a plausible notion.

Overall, next year is likely to continue the current trend towards more healthy eating as more and more people realise good quality food is probably one of the best medicines against a relentless pernicious coronavirus.

Curious Cook: Synthetic fertilisers and the environment
Food sellers, protect yourselves and your customers against typhoid Premium
Curious Cook: Fruit and vegetables, cows and gas, and more fodder for thought
Tipsy-Turvy: 5 things you should know about vermouth
Curious Cook: The story of hybrid meat
What's the best time to eat our meals?
Curious Cook: A diet of plastics
Tipsy-Turvy: A celebration of Irish spirits and drinks
Saturated fat: Is it really bad for our health?
When disgust helps avoid infection