Survey results show that people are eating less outside, shopping more to make home-cooked meals and are now more sensitive to the cost of food. — Reuters

According to several surveys, the current pandemic appears to be fundamentally changing the ways people perceive food.

It is not just fears about contamination by the coronavirus, such as the official concerns about contaminated frozen meat and fish imported into China. Nor are the concerns to do with disruptions of the supply chain and the potential for food shortages.

The interesting development is people around the world are now more concerned about the methods used to produce food, the unnecessary wastage of food and the quality of their food. It would seem it needed a global pandemic to make people focus on sustainability, environmental and other issues concerning food production, but it is better late than never.

As an example, in China, over 95% of a thousand people surveyed this year said it was important that supermarkets and restaurants only supply food from ethical and sustainable sources. And 90% stated the welfare and treatment of animals have a bearing on their purchasing decision. Prior to the pandemic, one would suspect support for such issues would be much lower. Nearly 40% of global food producers are now committed to coming up with plant-based alternatives to meat and dairy, like this plant-based beef. — Reuters

In the same survey, 92% of people expressed disquiet about food waste, and President Xi Jinping has also recently launched a campaign to tackle this issue. Next on the list of concerns were food contamination (especially by non-food impurities) at 82%, and worries about the quality of nutrition was expressed by 73% of respondents.

The same sentiments were also expressed in the UK, where national surveys indicated that 79% of the population undertook additional measures to manage their food consumption during the pandemic. Food waste had dropped by 43% during the height of the first lockdown though it has crept up again during summer when the lockdown was eased.

Methods by which food waste was reduced include 91% of respondents checking “Use By” dates on food (and eating it in time or within a few days after expiry), 87% eating more leftovers, and 85% storing food in freezers. More than 59% of the population were also shopping more to make meals at home.

During the first lockdown in the UK, over 16% of adults reported instances of food insecurity over a 3-week period; by comparison it was less than 4% before the pandemic. The UK is now deep into its second lockdown and food insecurity is now rising again.

The UK concerns are reflected in another multinational survey, though the sample sizes are small. However, they do reflect trends in other industrialised countries. In this survey, 40% of people would like to or are already buying their groceries online and 47% are eating less outside. Almost half the people are cooking more at home, with oddly, younger people doing this to a greater extent than older people. More than 57% of people aged between 25 to 34 are more likely to cook and bake at home compared to just 35% or less of people over the age of 55. Overall, around 55% of people surveyed are now also more price sensitive to the cost of food. A survey in China now indicates that people are more concerned about ethical treatment of animals in terms of food production. — Bloomberg

The more interesting and somewhat surprising results from the survey are:

(i) 75% of consumers believe that food companies have “a lot of responsibility for protecting the environment”,

(ii) 92% of people think it is “important that the ingredients in food products they buy are produced sustainably”; and,

(iii) 41% of respondents state that “environmental concerns have become more important since the coronavirus crisis”.

It would seem much of the world is finally waking up to the ongoing slow-motion global catastrophe happening due to our industrialised food production practices.

Such (strong) public sentiments seems to have not gone unnoticed by the food industry. According to an industry investment report, almost 40% of global food producers have already dedicated development, production and marketing resources to offer plant-based alternatives to meat and dairy. Almost half of the global food retailers now sell, or plan to sell, alternative protein products on the aisles normally reserved only for meat products.

Encouragingly, there is also a 57% increase between the years 2019 and 2020 in the number of industrialised farms planning to reduce emissions from animal agriculture, including greenhouse gases and toxic sewage effluents. The only thing missing is a commitment to eliminate animal cruelty around the world. Nevertheless, such initiatives are a good start, even though they are probably too late to mitigate the damage already done to our planet, at least within our lifetimes.

The commitments by the world’s largest food producers range from new investments of a few hundred million US dollars in total, up to a maximum of 10% of the resources available in some of the more committed firms. Most of the participating food companies are investing much less. To put this into context, the global food market is worth USD 11.7 trillion (RM47.9 trillion) in 2019.

The effect of a pandemic

Despite the dire consequences of the current pandemic, at least the silver lining may be greater awareness of the outcomes of environmental destruction and unwise human behaviours. As I write this, the Covid-19 global statistics stands at 1,353,906 deaths from 56,544,327 infections. Both numbers are certainly significantly understated, as many countries just do not report such data correctly. But, as mentioned in an earlier article, we may have gotten off lightly. 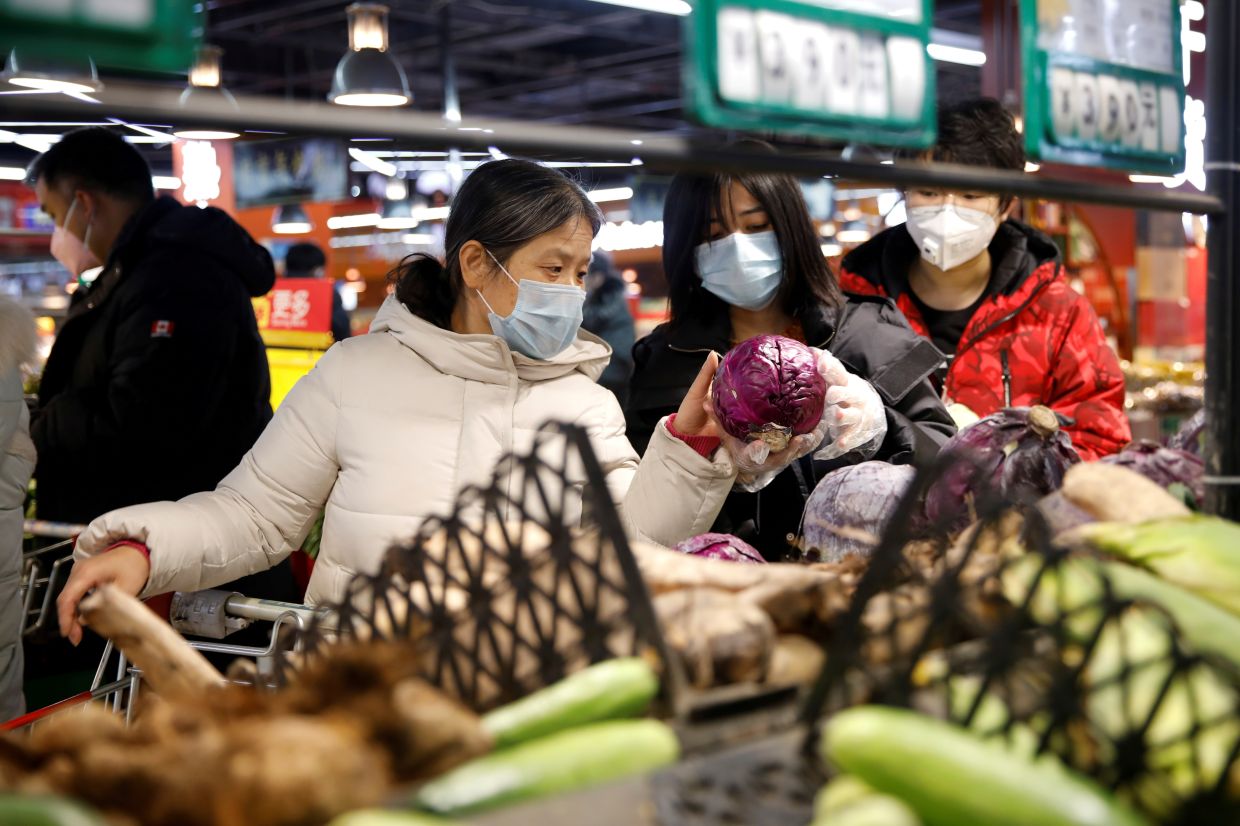 Since the pandemic, people have become more concerned about food wastage, food contamination and other food-related issues. — Reuters

My previous article ‘Living with the next pandemic, where it was noted that the rate of new zoonotic transfers (crossing over of a pathogen from another species to humans) is occurring once every four months on average due to transgressions of humans into new environments.

Zoonotic transfers by themselves seldom immediately result in fatal human diseases – in fact pathogens would usually die off by themselves unless there are persistent widespread human infections outside the original locality. However, with such an unnaturally high annual rate of zoonotic transfers, it is only a matter of time before a killer pathogen gets introduced into humans, as proved with SARS-CoV-2.

There are currently over 200 zoonoses (diseases which originated from a different species but which can now infect humans). Not all these diseases started out as a single pathogen transferring straight from another species into humans; there is normally a species barrier to overcome.

However, the chances of transmission can be considerably enhanced when an intermediary species is included in the transmission chain. The exact mechanisms are not understood but it is known that novel pathogens can adapt to or incorporate new genetic characteristics from pathogens in other species. With such adaptations, an improved new pathogen can arise, to which humans have no immunity.

Therefore it is a statistical game played by nature. Humans are encountering novel pathogens in almost every new exploited environment and three new zoonotic transfers occur each year as a result. Out of the known 200+ zoonoses, around 11 are known to be particularly fatal to humans.

If we apply this as a simple equation – and we assume (a) three new zoonotic transfers per year is a regular event, and (b) medical options are unavailable – then the chances of encountering another deadly zoonotic disease within 10 and 20 years is estimated roughly at 43.2% within 10 years and 67.7% within 20 years.

The only way to reduce the risk of zoonotic transfers is to stop human and/or livestock encroachment into pristine natural environments.

It was interesting to come across a simple methodology to estimate a likely Covid-19 “age” for individuals based on various risk factors. The underlying factors were established from the large volume of data derived from Covid-19 outcomes in the UK.

Hence there is a reasonable chance it can also be applicable to other countries as the UK has now suffered over 53,274 Covid-19 related deaths in a relatively diverse population over the last eight to nine months. Interestingly, more young people are cooking at home compared to older people, according to a survey in the UK. — Filepic

In particular, the nature of Covid-19 makes it possible to do a statistical estimation of various “risk and rate advancement periods” as described in the article. In short, with adequate data the age impact of catching Covid-19 can be assessed by noting the incidence of mortality against various age, genetic and known medical conditions (or co-morbidities).

The outcome of the assessment is a revised age; i.e., the Covid-19 mortality risk would be estimated to be comparable to the death risk of a normal person of the revised age.

To be honest, it has not been possible to validate the underlying data and calculation assumptions, and I have additionally also found some inconsistencies. So nobody can assume any responsibility for the validity of the estimations, but if one wants to do a simple, and very rough Covid-19 age assessment, then the website is: https://alama.org.uk/covid-19-medical-risk-assessment/. All the model data used is also explained on the website.

Is adopting a raw food diet good for you?
Curious Cook: September stories
Far from finished: How whisky finishing adds a different dimension to the spirit
Curious Cook: Optimum nutrients for health
Think you know all about probiotics? Then take this quiz
The problem with eating less in old age
How to get your kids to snack right
Traffic light food label fosters healthier diets
The blue hue of blueberries indicate their health benefits
Want a healthy, tasty snack? Try these homemade options