Traditional dishes served up with care BUBUR lambuk is a savoury porridge served for the break of fast during Ramadan.

Most versions of bubur lambuk are made with either chicken or beef stock as its base, but at the Citarasa Nipah Ramadan buffet in EQ, it is prepared with fish stock.

“Beef and chicken bubur lambuk are served in many places. So, we want to offer something different.

“We cook it here from scratch and put in a lot of effort.

“The beef is smoked in our kitchen with apple wood chips, which lends a distinct smokey flavour that sets it apart from others,” he said, adding that most commercially sold meats were smoked using coconut husk.

Kenduri favourite Daging Gulai Kawah is also on the menu.

Ali said he decided to include this gravy dish as many guests looked forward to it.

“We add bamboo shoots or brinjals to the gravy for flavour.

“Similarly, diners also look for Kambing Golek during this period.

“We marinate the meat with a dry rub consisting of Asian spices such as coriander, cumin and fennel to fit the theme,” he added.

These four dishes are staples at the Ramadan buffet.

“Some recipes date back to more than a century and are passed down from generation to generation.

“So our guests can now enjoy these delicious traditional dishes and make time for friends and family.

“Citarasa Nipah stands out as the cornerstone for traditional Malaysian fare and this year is no different with Ali and the team outdoing themselves on the culinary front,” he said.

As for desserts, from the many traditional Malay kuih and a selection of cakes and sweet treats, a few items stand out.

A must-try is the ciku cheesecake, which is the classic American cheesecake topped with sweet ciku.

The buffet dinner is priced at RM208 per adult and RM68 per child, aged between six and 12. A variety of traditional Malay dishes are served on the Citarasa Nipah buffet.

Kambing Golek being fired up at the grill station. 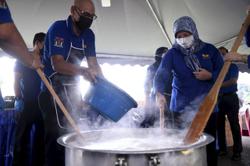