THERE is no right or wrong when it comes to something as subjective as wine pairing as it boils down to personal taste.

On that theory, gone were the days when wine had to be paired with Western food, because winemakers are now expanding flavour boundaries to celebrate the versatility of Asian food with wines.

In conjunction with this, Australian winery Wolf Blass launched a regional campaign titled “Find Your Flavour” in partnership with Michelin Guide last year.

This was to let South-East Asian consumers sample new food and wine pairings, encouraging everyone to savour their own flavours through unique, experimental combinations with Wolf Blass wines.

Wolf Blass brand ambassador Sam Stephens said, “Normally, when we think of wine pairing, we conjure up a big piece of steak with a rich red wine.

“But through a master class, we want people to experiment with the idea of pairing wine with Asian sauces, ” said Stephens who was at Ember Modern Bistro in Kuala Lumpur to promote the campaign. He walked us through the tasting notes of Wolf Blass wines, in particular the premium Gold and Grey Label wines against sauces created by chefs from Michelin-starred restaurants from Taiwan, Thailand, and Singapore.

The prelude started with all three wines for us to whet our taste buds, followed by the first of the sauces, which was the Taiwanese basil vinaigrette. For me, the Cabernet Sauvignon elevated and complemented the herbal flavours of the sauce. However, for Stephens, the Chardonnay was a winning match. “It did not take away the freshness of the Chardonnay, which was not served chilled to not mask the flavours, ” he said, adding that two people could taste the same wine but have diverse tastes.

For the chu hou sauce that had a rich, beef stew caramelised character, it paired well with the Cabernet Sauvignon. “Now with sharing platters in restaurants, people can have something heavy in the middle, then go back to vegetables and seafood and that actually opens up more possibilities in terms of how we drink the wines.

“We want to show there are more compatibilities between heavier wines and sauces, ” said Stephens, adding that this was the first event in Kuala Lumpur to introduce the Wolf Blass range of wines to bring food and wine matching to a broader audience.

Next was the masala sauce, and the Shiraz in my opinion was a winner as it enhanced the vibrancy and lifted the flavours of both the wine and sauce.

For the red curry based chu chee sauce, it was a tie with the red wines, as Stephens concurred as well.

With our tummies seasoned, the dinner had us salivating in anticipation of Gary’s cleverly curated menu featuring mostly locally-sourced ingredients, starting with the corn chips, smoked yoghurt and caviar, shiso, sengkuang and avocado, romaine lettuce, pistachio and lemon slices as pre-appetisers.

The Chardonnay made its appearance again with the hamachi, ponzu, pickled apple and ulam raja. The wine sang from the freshness of the Japanese amberjack and tartness from the apple. 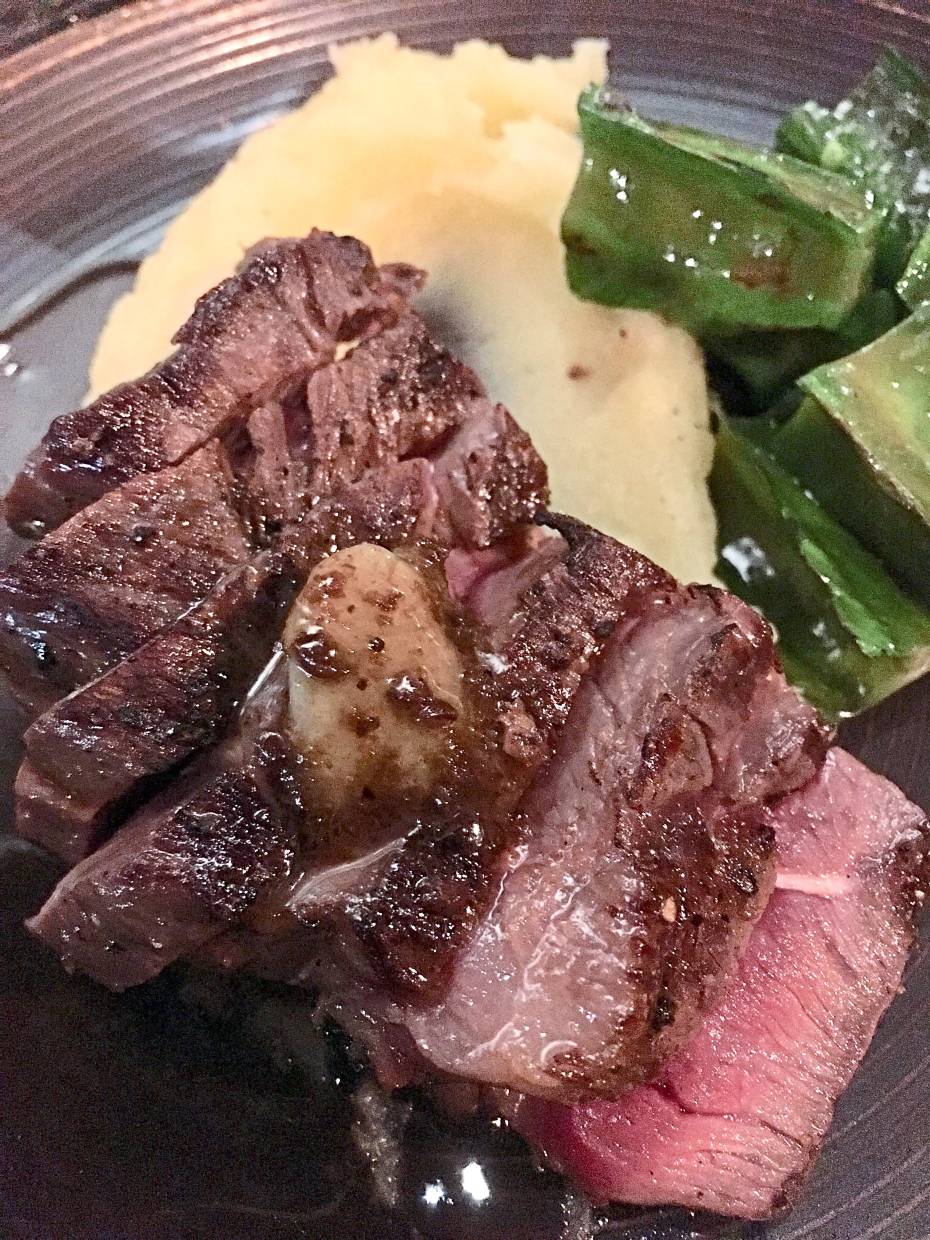 Next was the steamed baked local fish, mushrooms and smoked fish sauce served with the Shiraz. The sourness from the asam keping sauce in the threadfin (senangin) fish intensified the flavours in the wine but overwhelmed the delicate mushrooms.

I was excited for the next dish of dry, aged duck with kicap manis tare, pucuk paku and sesame, served with the Cabernet Sauvignon. The umami character prevailed in the soy sauce and rich, spiciness of the wine.

For the last main course of striploin, potato puree, sansho butter and four-angled beans, it was paired with the 2016 Wolf Blass Grey Label Shiraz. Sansho is a type of Japanese pepper that has citrusy flavours.

“The Grey Label represents a step up in our super premium labels representing higher quality vines and greater concentration, like the 100% Shiraz.

“When you move from gold to grey, you will notice the elevated intensity and richness in the wine, but still there is eminent drinkability at that premium level, ” said Stephens.