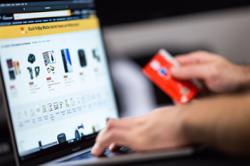 Sales, not adjusted for inflation, rose 5.8% from a year ago, per data from Adobe Analytics, which measures e-commerce performance by analyzing purchases at 85% of the top 100 internet retailers in the United States.

While retailers started promotions and discount offers as early as October to induce more sales, turns out inflation-weary shoppers had largely put off their holiday shopping until the Black Friday weekend and Cyber Monday in hopes of finding the best deals.

Major retailers including Target, Macy's and Best Buy have all signaled a return to pre-pandemic shopping patterns and the need to discount more heavily during the traditional single-day shopping events.

Toys were the hottest products on Cyber Monday, with online sales going up nearly eight-fold compared to an average day in October 2022, according to the Adobe Analytics report.

The report added that Pokemon cards, Hot Wheels, PlayStation 5s, Smart TVs and Apple AirPods were among the best-selling products.

Still, some experts were not convinced that a bright Cyber Monday was a sign of inflation easing its burden on consumer sentiment.

"Online shopping still makes up only about 15% of all retail sales. So it is not necessarily a great indicator of the health of the economy overall," said Dan North, senior economist at global trade credit insurer Allianz Trade North America.

(Reporting by Uday Sampath in Bengaluru; Editing by Shinjini Ganguli)