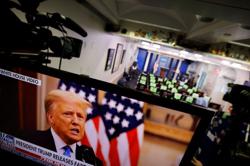 Airbnb said it also was investigating whether people named as participants in the Capitol attack by law enforcement had used their services. — AFP

SAN FRANCISCO: Airbnb and Google on Jan 13 unveiled steps aimed at heading off attacks on US democracy as inauguration day neared for President-elect Joe Biden.

The leading home-sharing platform put out word it is banning bookings in Washington around the time of Biden’s Jan 20 inauguration after local authorities asked people to stay away following the attack on the US Capitol.

“We are announcing that Airbnb will cancel reservations in the Washington, DC metro area during the inauguration week” and stop any new bookings, the company said in a statement.

Google joined the effort to curb new attacks, confirming it is temporarily halting political ads on its platform starting Thursday and at least until the day after Biden is inaugurated.

It will also decline ads referencing impeachment, the inauguration, or protests at the US Capitol.

“We regularly pause ads over unpredictable, ‘sensitive’ events when ads can be used to exploit the event or amplify misleading information,” Google said.

The company sent a letter to advertisers explaining the hiatus on political ads, saying there would be no exemptions for news or merchandise.

The suspension will apply across its sites, including video-sharing platform YouTube and Google Ads network, the Silicon Valley company told advertisers in the letter seen by AFP.

“We will carefully examine a number of factors before deciding to lift this policy for advertisers and share updates as we have them,” Google said in the letter.

When Sundar Pichai, chief executive of Google parent Alphabet, was asked at a Wednesday conference if the company was blindsided by last week’s violence, he referred to its efforts to curb the spread of misinformation on the platform around the November election.

“Last week’s events were chilling to see, and I’m glad as a country we are taking it seriously,” Pichai said.

“We are constantly learning through these moments and the internet as a whole.”

The move comes on the heels of YouTube temporarily suspending President Donald Trump’s channel and removing a video for violating its policy against inciting violence, joining other social media platforms in banning his accounts after last week's riot riot at the Capitol in Washington by his supporters.

Operators say the embittered leader could use his accounts to foment more unrest in the run-up to Biden's inauguration.

“In light of concerns about the ongoing potential for violence, we removed new content uploaded to Donald J. Trump’s channel for violating our policies,” YouTube said in a statement late Tuesday.

The channel is now “temporarily prevented from uploading new content for a ‘minimum’ of seven days”, the statement read.

The video-sharing platform also said it will be “indefinitely disabling comments” on Trump’s channel because of safety concerns.

Facing the possibility of renewed protests from Trump supporters who believe the false claims that the elections were rigged, residents in the city had called on neighbours with Airbnbs not to rent during Biden’s swearing-in.

Local 25, a union representing 7,200 hotel workers in the Washington area, called on hotels not hosting security forces to close and let staff opt out of working if they feared for their safety.

“No worker, union or non-union, should have to risk their life to go into work. Unfortunately, that is the situation we are now faced with,” the union’s Executive Secretary-Treasurer John Boardman said.

“We are asking Americans not to come to Washington DC for the 59th presidential inauguration on January 20 and to instead participate virtually,” she said.

Airbnb said it also was investigating whether people named as participants in the Capitol attack by law enforcement had used their services.

“Through this work, we have identified numerous individuals who are either associated with known hate groups or otherwise involved in the criminal activity at the Capitol Building, and they have been banned from Airbnb’s platform,” the company said. – AFP