The US is home to five of the world’s top 10 universities in the AI field, which includes computer vision and machine learning, while China has three. — SCMP

After working in the United States for more than a decade, Zheng Yefeng felt he had hit a glass ceiling. He also saw that the gap in artificial intelligence between China and the US was narrowing.

Last year Zheng, who worked as a researcher at Siemens Healthcare in New Jersey, made a decision that addressed both problems. He accepted an offer to head up the medical research and development team at Tencent’s YouTu artificial intelligence lab in Shenzhen, known as China's Silicon Valley.

“There was almost no room for promotion if I stayed in the US,” he said, expressing a common dilemma faced by experienced Chinese tech workers in America.

With the US-China trade war leading to tighter scrutiny of Chinese nationals working in the US tech industry, people like Zheng are moving back to China to work in the burgeoning AI sector, especially after Beijing designated AI a national priority. The technology’s varied applications have attracted billions of dollars of venture capital investment, created highly valued start-ups like SenseTime and ByteDance, and sparked a talent war among companies.

That has created an odd symbiotic relationship between the two countries vying for AI supremacy. The US, with its superior higher education system, is the training ground for Chinese AI scientists like Zheng, who obtained a PhD from the University of Maryland after earning bachelor’s and master’s degrees at China’s premier Tsinghua University.

“Many professors in China have great academic ability, but in terms of the number [of top professors], the US is ahead,” said Luo Guojie, who himself accepted an offer from Peking University to become an assistant professor after studying computer science in the US.

Among international students majoring in computer science and maths in US universities, Chinese nationals were the third largest group behind Indians and Nepalese in the 2018-2019 academic year, representing 19.9 per cent, according to the Institute of International Education.

The South China Morning Post spoke with several Chinese AI engineers who decided to stay and work in the US after their studies. They only agreed to give their surnames because of the sensitivity of the issues being discussed.

A 25-year-old Beijinger surnamed Lin graduated from one of China’s best engineering schools in the capital before heading to a US university for a master’s degree in computer science in 2017. Like some of his peers, he found the teaching methods in China to be outdated.

“It’s hard to imagine that a final exam of a coding course still asked you to hand write code, instead of running and testing it on a computer,” said Lin, who now works as a software engineer for Google in Silicon Valley.

“Although we still had to take writing tests [in the US], we had many practical opportunities in the lab and could do our own projects,” he added.

A Facebook software engineer surnamed Zhuang had a similar experience at his university in Shanghai.

“Many engineering students [in China] still get old-school textbooks and insufficient laboratory training,” he said. “Engineering practices for AI have been through a fast iteration over the past few decades, which means many Chinese students are not exposed to the most updated knowledge in the field, at least not in the classroom.”

Zhuang also noted out that many classes in China are taught in Chinese, meaning engineering graduates are not fluent in English, the preferred language of the global AI research community.

The US is home to five of the world’s top 10 universities in the AI field, which includes computer vision and machine learning, while China has three. Carnegie Mellon University (CMU) in Pennsylvania ranks No 1 while China’s Tsinghua University is No 2, according to CSrankings, which bases the list on papers published since 2009.

With its top institutions and an open culture that encourages freedom of speech, including unfettered internet access, the US has become a magnet for the brightest AI students the world over.

In 2018, 62.8% of PhD degrees and 65.4% of master’s degrees in computer science, information science and computer engineering programmes in the US were granted to “non-resident aliens”, according to a survey by the Computing Research Association.

“[To build] the best universities is not easy,” Gunther Marten, a senior official with the European Union delegation to China, said on the sidelines of the World Internet Conference in Wuzhen in October. “The university is a free speech space, whereas in China, this is not the case.” 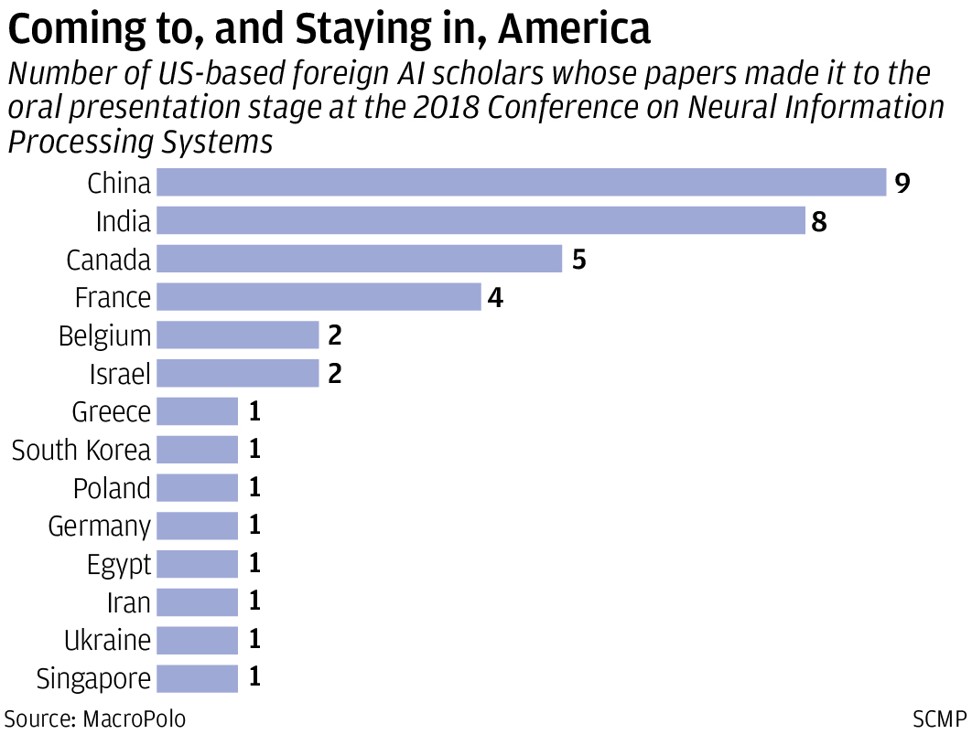 When these US-educated AI scientists finish studying, most take advantage of a rule allowing them to stay in the country for three years to gain work experience.

Of the foreign nationals taking part in last year’s Conference on Neural Information Processing Systems (NIPS), a major machine learning event for AI professionals, 87% of those whose papers made it to the oral presentation stage went to work for American universities or research institutes after earning their PhD, according to MacroPolo, a think tank under the Paulson Institute.

“China has many great universities and companies, especially in certain subfields of AI such as computer vision, but many people remain hesitant to move to China due to the political environment, quality of life concerns and workplace issues,” said Remco Zwetsloot, a research fellow at Georgetown University’s Center for Security and Emerging Technology (CSET).

Some of the US-trained Chinese AI engineers told the Post they were scared off by China’s “996” working culture: 9am to 9pm, six days a week. Tech firms in China typically expect their employees to work long hours to prove their dedication.

Lin, the Beijinger who now works for Google, used to be an intern at one of China’s largest internet giants. “I worked from the time I woke up until going to bed,” he said, “At Google, I’ve been confused because many people here only work till 5pm but Google is still a global leader.” Lin said he would be happy to return to China if the 996 work culture eases. 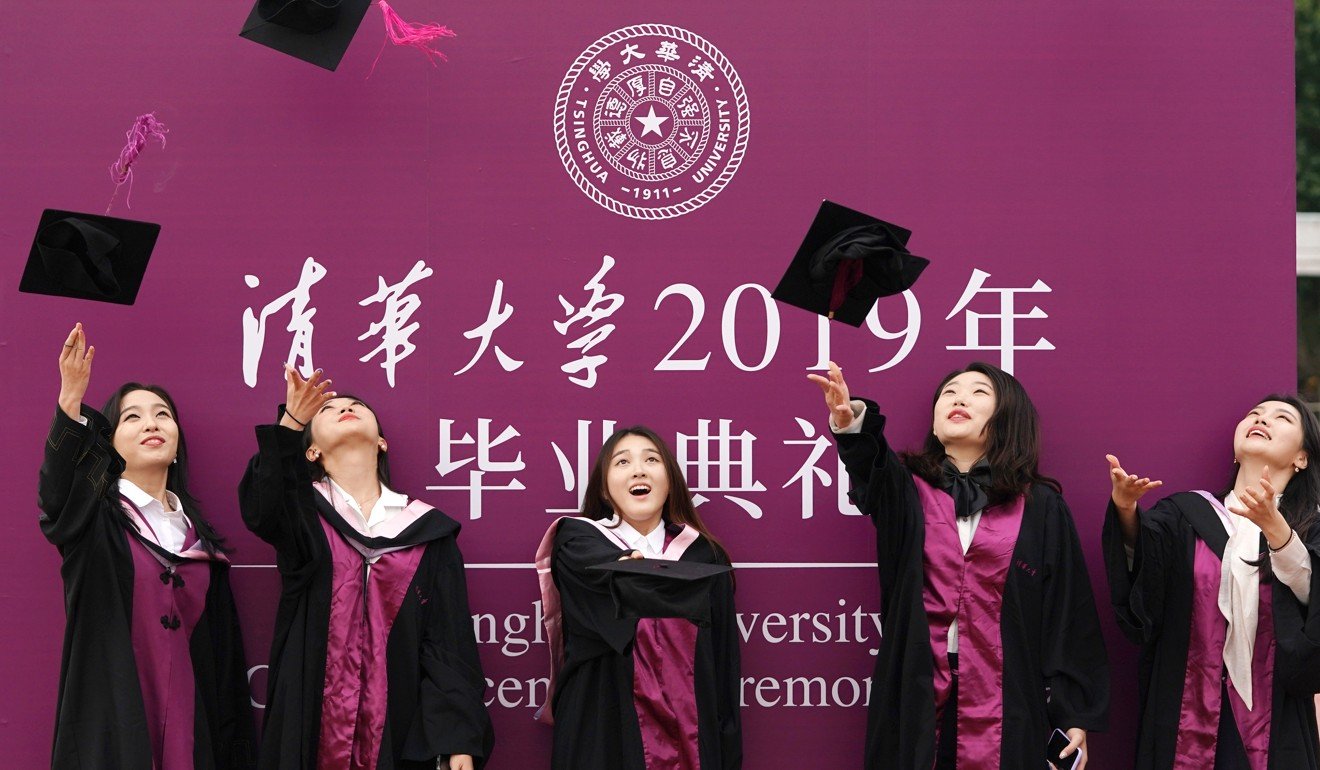 Chen, a female postgraduate student at Carnegie Mellon, who recently accepted a job offer from Google, once interned at Beijing-based AI unicorn SenseTime, where she worked from 10am to between 8pm and 10pm most days.

A SenseTime spokesperson said the company has adopted flexible working hours for its employees.

Besides a better work-life balance, Chinese graduates look for jobs in Silicon Valley because of the higher pay.

Still, for those Chinese with long-term plans to stay in the US, a major obstacle lies in getting work visas, especially in the current trade war environment. Most AI-related workers are on H-1B visas that allow US companies to employ non-US nationals with expertise in specialised fields such as IT, finance and engineering.

However, the number of non-immigrant H-1B visas granted has started to fall since 2016, when it peaked at 180,000, according to the US Department of State, and US tech companies have complained that a policy shift by the Trump administration has made the approval process longer and more complicated.

In 2017, President Donald Trump requested an overhaul of the H-1B visa programme, saying he did not want it to enable US tech companies to hire cheaper foreign workers at the expense of American jobs. He also wants to give priority to highly skilled people and restrict those wanting to move to the US because of family connections.

Science graduates from overseas countries can stay in the US with their student visas for up to three years while competing for the hard to get work visas, which are granted based on undisclosed mechanisms. Overseas students already working in the US can apply for so-called green cards, which offer permanent residency.

After working for a major US tech company for almost three years on a student visa, one Chinese software engineer, who spoke to the Post on condition of anonymity, said she was relocated to the US firm’s Beijing office last year after failing to obtain a H-1B work visa.

“While there might be individual cases, it seems like the current tensions have not – at least as of a few months ago – led to noticeable changes in the overall number of Chinese students staying in the US after graduating,” said CSET’s Zwetsloot.

Some Chinese AI scientists use Twitter to announce their decision to stay. Chen Tianqi, who just obtained a PhD at the University of Washington in Seattle, and Jun-Yan Zhu, a CMU and UC Berkeley alumnus currently working at Adobe, each tweeted that they would join Carnegie Mellon as assistant professors next year.

To achieve the goal of turning China into “the world’s primary AI innovation centre” by 2030, according to a 2017 blueprint issued the State Council, the central government has stepped up efforts to attract US-educated talent. 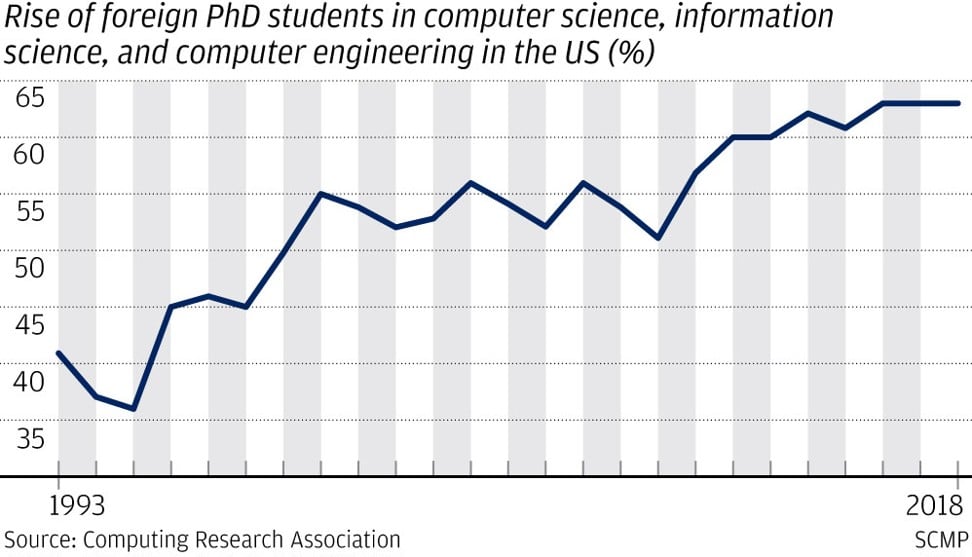 The Thousand Talents Plan has seen more than 6,000 overseas Chinese students and academics return since its was established in 2008, but because of escalating tensions with the US, Beijing has played down the initiative.

Longer term, Beijing’s willingness to invest significant sums into the AI sector could see more Chinese return for the better employment opportunities. Between 2013 and the first quarter of 2018, China attracted 60% of global investment in AI, according to a Tsinghua University report.

Chinese authorities are investing heavily in the sector, with the city of Shanghai setting up a 10bil yuan (RM5.91bil) AI fund in August and Beijing city government announcing in April it would provide a 340mil yuan (RM201.04mil) grant to the Beijing Academy of Artificial Intelligence.

“More and more senior people like me have come back, and some start their own businesses,” said Zheng, the Siemens Healthcare researcher who joined Tencent. “It’s easier for Chinese to seek venture capital in China than in other countries.” – South China Morning Post