Death Stranding is a visually beautiful game, as the post-apocalyptic vistas can make you pause your journey just to admire the (sometimes haunted) scenery.

A part of me doesn’t want to tell you what this PS4 game is about, because the process of figuring out what exactly this latest mad experiment from the creator of Metal Gear Solid is part of the experience.

Death Stranding’s such a fascinating mixture of experimental gameplay from an indie studio and high definition polish from AAA studio, of campy sci-fi melodrama and pants-soiling Lovecraftian horror, that I’d feel bad if I prepared you for what to expect from this game. 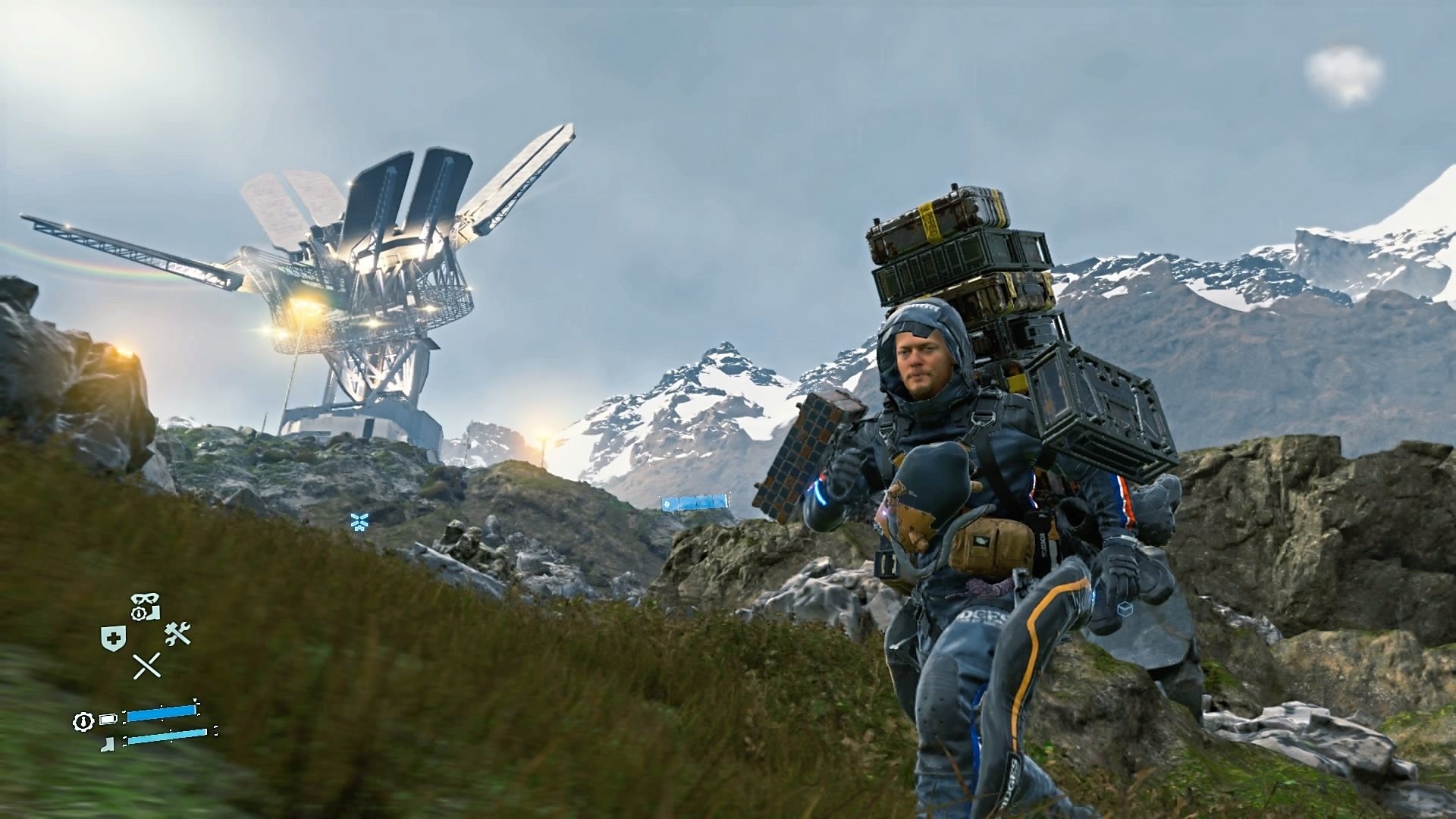 Expect to carry cargo across a variety of terrain – including steep rocky mountains – because Sam can always use the exercise.

But then again, another part of me actually wants to get paid for reviewing games, so... let’s dive straight into the madness!

In Death Stranding, the world has been devastated by the titular mysterious event, and it’s up to Sam Porter Bridges – a one-man delivery company – to reunite the survivors of this futuristic phantom-plagued USA by delivering packages and building connections. It’s FedEx: The Game, but what you’re delivering is deliverance, and there are ghosts everywhere because the very concept of death itself has jumped screaming out the window. 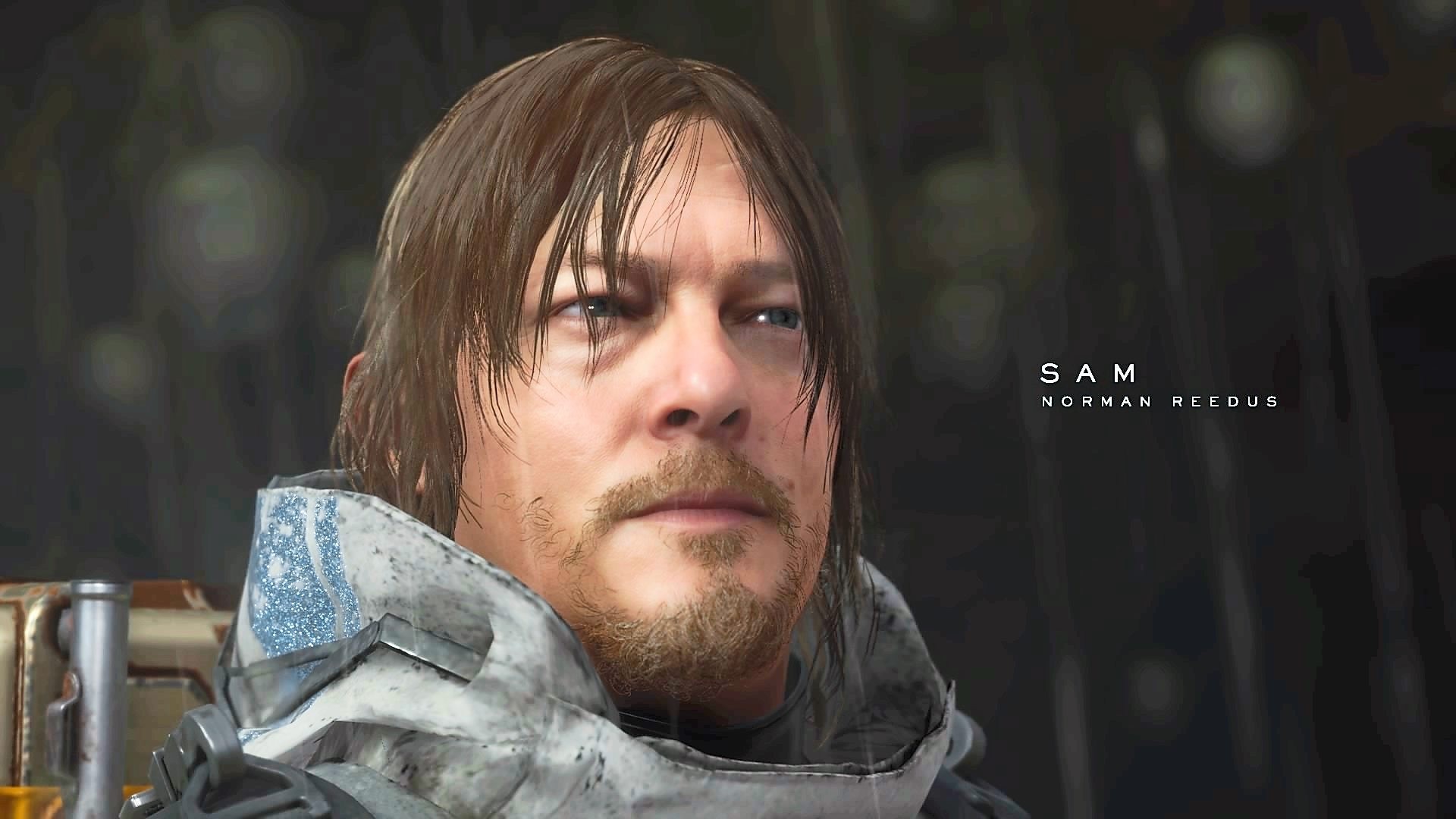 Get used to seeing a lot of Norman Reedus as Sam Porter Bridges in this game.

If you’ve seen the freakishly weird trailers for this game – such as the 2016 E3 teaser featuring Norman Reedus (from TV’s The Walking Dead) cradling a baby next to an inky-black sea with the corpses of beached sealife – you’re probably thinking, “wait, it can’t be that straightforward and non-confusing” but, yeah, it is.

The high concepts presented in Death Stranding can actually be easily summarised as a “post-apocalyptic sci-fi ghost story”, but players can easily be confused by the details, thanks to Kojima’s trademark madman storytelling.

On one hand, the sci-fi lore of the world is buried neck deep in techno jargon which is only explained much, much later. In the first hour alone, you’ll need to figure out terms like timefall, voidouts, the Beach, chiral networks, BTs, and BBs. Note that you’ll be doing this while thrust into a bizarre world where rain ages people and invisible phantoms leave terrifying black handprints and you’re carrying a ghost-detecting baby in a jar, so figure those things out quickly! 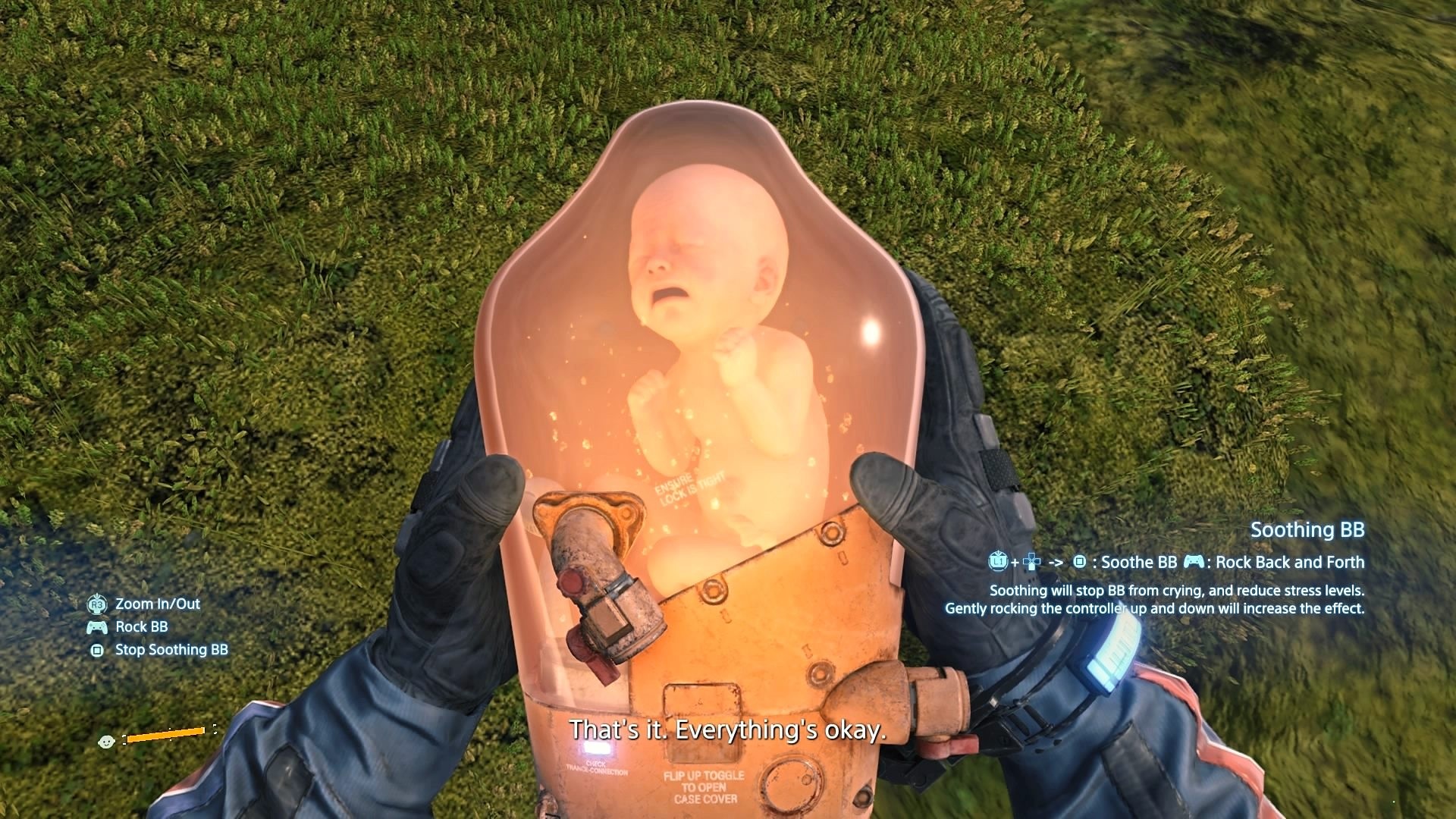 The fact that your partner is a ghost-detecting baby in a jar isn't even in the top 10 weirdest things in this bonkers story.

On the other hand, the symbolic themes of the story are presented in such a camp, obvious, and melodramatic way that I can’t help but love the blatant sincerity. You’ll have cinematically directed cutscenes where award-winning actors (and one award-winning director, because Guillermo del Toro is still friends with Kojima after P.T.) scream “we need to reunite America so we created an organisation called BRIDGES! Strand could mean isolated like a beached whale, but also, like, a rope that connects people!”

Our hero’s name is Sam Porter Bridges, for goodness’ sake – a name so wonderfully on the nose that everyone should change their names to (First Name) (Your Job) (Thing You Work On). The organisation trying to build bridges between humanity is called Bridges. This game has a lot of mystery, but not subtlety.

The only real problem with the narrative is that Kojima’s stories continue to be really weird with how it treats its female characters, (though thankfully not as bad as Paz and Quiet’s unnecessary tragedies in Metal Gear Solid V) and the later parts of the story stretch on for way, way too long.

While the story feels like being thrown into the deep end of the crazy pool (which someone filled with haunted sea water), the gameplay mechanics take such small baby steps that the first few hours of play, you’ll struggle just figuring out how to walk.

This is harder – and surprisingly way more interesting – than it sounds. Most of the game is spent travelling from Point A to Point B while carrying ridiculous amounts of cargo on your body, so you’ll have to figure out how to choose the best kind of terrain to traverse and manage how you carry items without losing balance and smashing things. You'll quickly learn that inventory management becomes a core part of the gameplay, as travelling hundreds of miles carrying a truckload of cargo strapped to your body is a bad idea.

While Mario Odyssey lets you bounce around like an Olympic-level plumber and Breath Of The Wild encourages adventurous exploration, Death Stranding is a game that rewards careful planning and the ability to adapt to obstacles. What route will you take to your destination? What tools can you afford to carry? Do you take a climbing rope so you can handle cliffs, or weapons in case you run into hostile survivors?

And how do you plan to handle ghosts – aka Beached Things, aka BTs, aka the game’s signature obstacle and threat? Traversing a spooky haunted area filled with BTs – which are invisible and can only be sort-of detected by your baby-in-a-jar – feels as fun and relaxing as a Sunday walk through a minefield. And heaven help you if you get caught, because a game over screen would have been a mercy compared to the pants-soiling terror that results. Tip 1: if you stand still in an haunted area, you can catch a glimpse of the invisible ghosts. Tip 2: you should always be running from haunted areas.

You know you’re doing well in Death Stranding when, paradoxically, nothing is happening, and you’re travelling peacefully across the vast, beautifully rendered, and chillingly lonely landscapes of a destroyed America, while the soft tunes of an indie pop song starts to play.

One thing to note is that, if you’re expecting Death Stranding to be a successor to Metal Gear, you’ll be disappointed. Sam Porter Bridges isn’t a sneaky action hero like Snake. (Or as he’s known in Death Stranding, Snake Sneakyman Cardboardboxes.) You can try to sneak into the camp of hostile survivors, for example, but there’s rarely anything for you to hide behind. You’ll eventually unlock weapons to defend yourself, but the gunplay is pretty basic.

If you lay down a ladder to climb a steep incline, for example, then other players get to use that same ladder in their game. They might even give you a (social media-ish) Like! Conversely, you might be struggling to figure out how you’ll carry a heavy shipment of medicine across a wide river, only to breathe a sigh of relief when you see that other players have worked together to construct a bridge for everyone to use. If you get into a fistfight with human survivors of the post apocalypse, you are playing the game wrong.

This use of asynchronous online multiplayer elements seems like an ingenious extension of Dark Souls’ “Signs” (which let you share hints with players in their separate game worlds), and there’s nothing quite as satisfying as breezing through what was once an insanely torturous delivery run because, in the intervening time, the combined effort of players in their own individual games have reconstructed the roads, shelters, and infrastructure to safely traverse dangerous areas. (They have, in fact, built a highway to the danger zone.)

I love this multiplayer cooperation and how it ties into the game’s narrative, but I do have some reservations. First, I’m not sure how terrible this game might feel if you can’t go online and receive help from other players, and second, once this game is released to the public, I have no idea how online trolls will be dealt with.

I was absolutely fascinated by my time with Death Stranding, but any recommendation I give about playing this game has to come with several asterisks. The gameplay is ingenious and interesting, but the moment-to-moment action isn’t “exciting”. The melodramatic sci-fi soap opera story kept me glued for my entire 40+ hour playthrough, but will drive you mad if you can’t keep up. 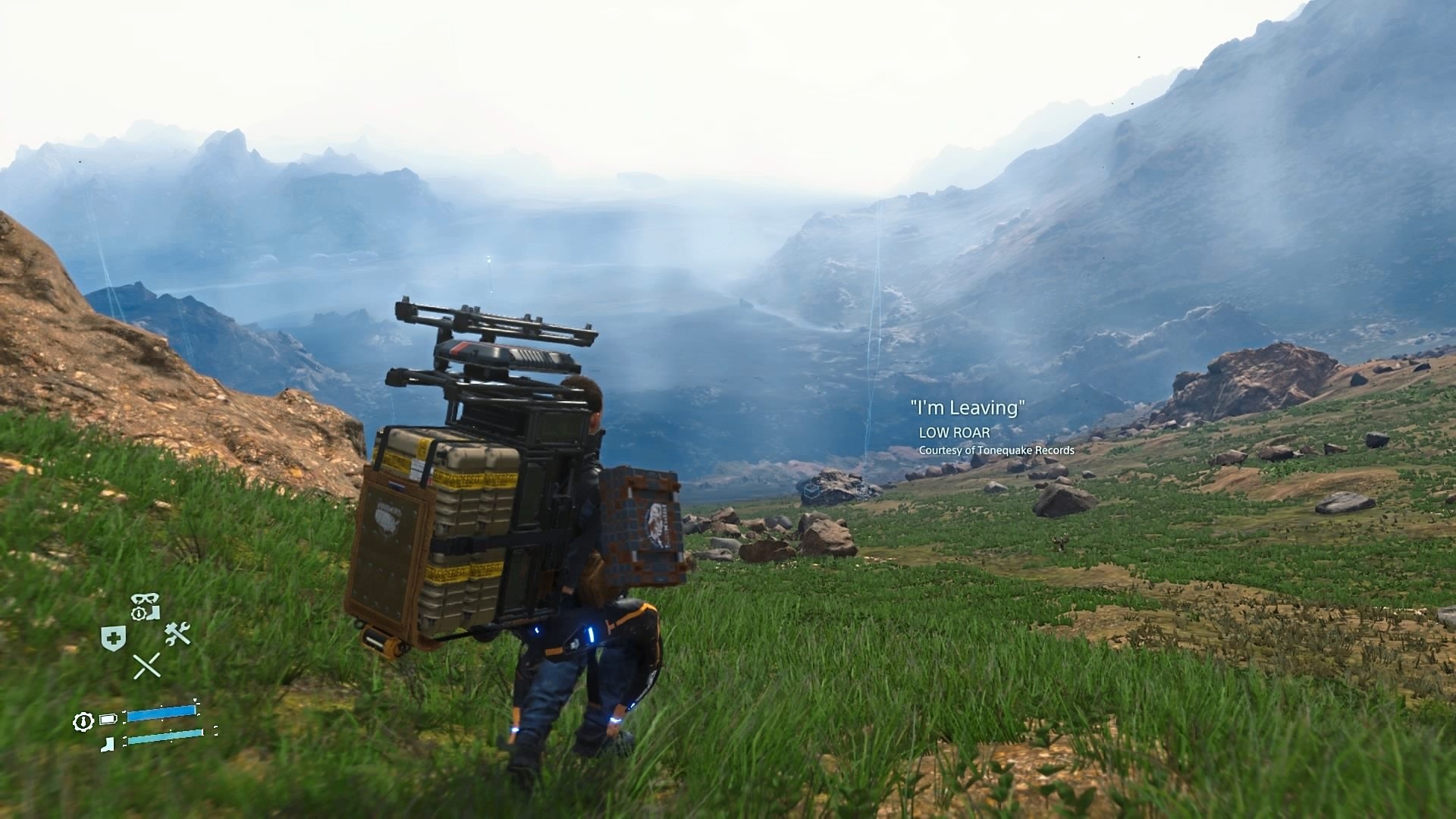 The best moments of the game is when you're travelling across a quiet peaceful landscape, and soft music starts to play. It's serene and cinematic.

However, if you’re looking for a fascinating future world that you can spend dozens of hours immersed in; or if you like creative and unique gameplay mechanics that reward you for planning and adaptability; or if you enjoy long quiet walks in the great outdoors but can’t leave your house; then you owe it to yourself to connect with Death Stranding, because this is a videogame like no other.

And you can trust me on this, because my name is Shaun Reviewer Games.

Cons: Sometimes it’s difficult to figure out if the story is simply incomprehensible or if you’re experiencing an aneurysm.