Step into the future

By CHONG JINN XIUNG
We have been playing with the PS4 non-stop for a day and give you our initial impression of Sony’s next-gen console.

Every gamer looks forward to the arrival of next generation videogame consoles which is why we couldn’t wait to get our hands on Sony’s PlayStation 4 (PS4) which reached our shores just a few days ago.

Going by looks alone, the PlayStation 4 is a slim and sleek device with a futuristic design that sets it apart from its predecessor. It’s amazing that Sony has managed to squeeze in so much more into the slender frame of the PS4, making the PS3, especially the original one, look dated by comparison.

Just like the PS3, the power supply has been integrated into the body of the PS4, so you don’t have to see the unsightly power brick. This also makes transporting the PS4 to your buddies place that much easier.

Also, the partly glossy, partly matte look is a nice touch and reminds us of Sony’s monolithic design for its range of high-end Bravia TVs, which is probably intentional.

The console can be placed vertically or horizontally — we don’t recommend the vertical position as the base is small and you won’t want to topple your pricey PS4.

All digital: Unlike its predecessor, the PS4 is completely digital so you won't any analogue ports here.


As this is a next-gen console, Sony has left out the traditional analogue audio and video outputs, leaving only HDMI and optical which is ideal for HDTVs. There is also a HDMI cable included with the console so you don’t have to hunt for one.

The PS4 comes with a Dualshock 4 controller which is a major upgrade from the previous model. The directional-pad is now much more sleek and comfortable to use, as are the analogue sticks.

We always felt that the Dualshock 3 (which comes with the PS3) has analogue sticks that are too soft, especially when compared to the Xbox 360’s. While this is great for fighting games,  the Dualshock 3 isn’t great for first-person shooters as it’s harder to make precise movements.

Big trouble: If you are looking for a first person shooter for the PS4 Killzone: Shadow Fall showcases the graphical capabilities of the system.


The Dualshock 4 doesn’t suffer from this problem and even the R2 and L2 buttons have been redesigned to function more like triggers which makes shooting bad guys even more satisfying.

The controller has an integrated audio/microphone jack which we have been looking forward to — this jack accepts almost all standard headphones. If you don’t have one, Sony has included a pair of mono ear plugs with the PS4, so now you can enjoy your games without waking up your neighbours.

The PS button that used to sit in the centre of the controller has been moved down to make way for a large touchpad. Games like Killzone: Shadow Fall use it for switching weapons. 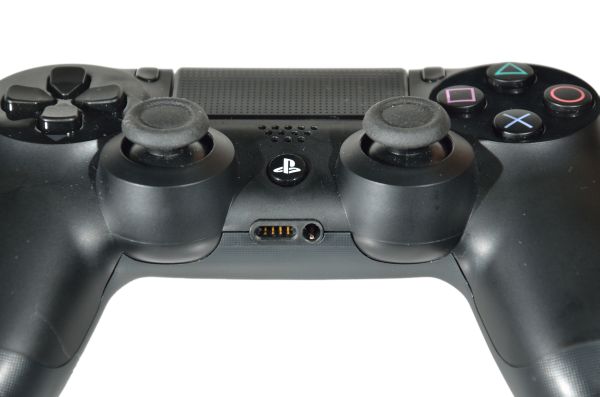 Plug in: One of the handy features of the new Dualshock 4 is its built-in microphone and audio jack that allows you to plug in your favourite pair of gaming headphones.


There is also a Share button that allows you to capture images, record videos and even broadacast live footage of your best gaming moments so that you can show your friends what they missed. However, it’s a little challenging to hit the button during intense gaming moments.

Like the previous controllers, the Dualshock 4 also features a six-axis motion sensor but we didn’t get to play any games that took advantage of this function.

If there is one major flaw with the new controller, it’s the battery life — we got about seven hours before we needed to recharge it again. The only good news here is that the PS4 can charge the controller even when it has been powered down and is in standby mode, something the PS3 couldn’t do.

Sony has abandoned the XrossMediaBar (XMB) user interface it used in the PS3 and introduced an entirely new look with the new operating system, which it has christened Orbis.

Everything looks clean and fresh and the console takes less than 20 seconds to fully start up. However, before you can start using it for the first time you will be greeted with a compulsory firmware update (version 1.52, in our case).

After the update, we checked out the PSN Store and are sad to report that it has yet to be fully populated with PS4 games but this should change in the coming months.

You can also browse the Web from the built-in browser and it feels surprising natural to navigate using the controller. And as it supports Flash, we dare say you won’t miss your desktop web browser.

Back to the interface, the Orbis OS is a big improvement over the XMB as it’s more intuitive to use and not as simplistic. You can now temporarily suspend a game anytime and access the menu using the PS button.

But the way Orbis lists games in an endless horizontal line is messy at best. For the time being, our small collection of games still looks neat but what happens when we have accumulated over 30 titles? That’s a lot of scrolling to do if you suddenly have the urge to play an old game.

For storing your games, the PS4 comes with 500GB of storage. While this might sound a lot at first but when games like Killzone take about 20GB, it is only a matter of time before the hard drive fills up.

On the bright side, the PS4’s hard drive can be swapped with a larger capacity one or even a SSD (solid-state drive).

All that power: Infamous: Second Son is one of the PS4 exclusives to look out for.

There is no doubt that Sony’s PlayStation 4 has what it takes to be a next-gen consoles but it’s still in its early days. Like a newborn, the system needs time to grow.

As it stands, the PS4 launch titles are mostly ports of games already available on the PS3 such as Assassin’s Creed IV, Battlefield 4 and Call of Duty: Ghosts. Exclusive titles like Killzone: Shadow Fall and Knack do take advantage of the PS4’s capabilities but are hardly system sellers.

But it’s just a matter of time before great games like the sequel to Uncharted, Infamous: Second Son, The Order: 1886 and many more make it to the PS4.

Pros: Cool and striking design; interface has been improved a lot; games can be temporarily suspended; vastly improved controller.