Fuji's X100T improves on its already great predecessor with a few tweaks and improvements.

The first X100, launched in 2011, heralded a new era for Fujifilm as it made a return to retro looks and controls with its high-quality APS-C compact camera.

Based on the success of the compact, Fuji introduced a slew of models based on the same concept, from small compacts to Interchangeable Lens Mirrorless cameras like the X-T1.

As for the X100, the company has since released a couple of new versions, the latest being the camera we have on review today, the X100T.

Fujifilm has wisely decided not to fool around with its winning formula with the X100T – externally, the camera looks identical to the X100S that it replaces and has the same size, shape and lens.

Even the image sensor is the same APS-C-sized 16-megapixel CMOS X-Trans but this is not surprising, as the sensor is still one of the best even when compared to more recent cameras.

So what’s different, you ask? Well, there are quite a few tweaks here and there that make an already excellent camera even better. SIMPLIFIED: The top plate of the camera has a very simple and easy to understand layout.

One major improvement is in speed – the camera is no longer limited to its 1/4,000sec mechanical shutter speed, as Fuji has added an electronic shutter option that allows it to go all the way to 1/32,000sec.

Of course, the X100T retains the excellent optical/electronic viewfinder of its predecessors which allows you to seamlessly change between the two with a flick of a switch.

Also, now the parallax correction lines update automatically when you focus in manual mode and you can set the camera to temporarily switch from optical viewfinder to EVF to help you focus.

There’s also one other new feature available when you use the optical viewfinder, but I’ll deal with it in the next section.

If you’ve ever used any of the previous X100 models, you’ll feel right at home with the X100T as they work the same and you get excellent retro controls which allow you to switch between full auto to shutter-priority and aperture-priority very easily.

Instead of P, S, A and M modes, the X100T simply has an A on the shutter dial and another A on the aperture ring around the lens.

Switch the aperture ring out of A and you get aperture-priority mode, where you can choose any available aperture while the camera automatically chooses a shutter speed for you. Similarly, leaving the aperture ring on A and rotating the shutter dial gives you shutter-priority auto-exposure.

Switch both the shutter dial and aperture ring out of A and you get full manual control – it’s all very easy and intuitive in practice.

Shooting with the X100T is a joy – it produces focus beeps and (artificial) shutter sounds when you take a photo but you can actually turn them off so that the camera only produces very faint “click” sounds when you shoot. 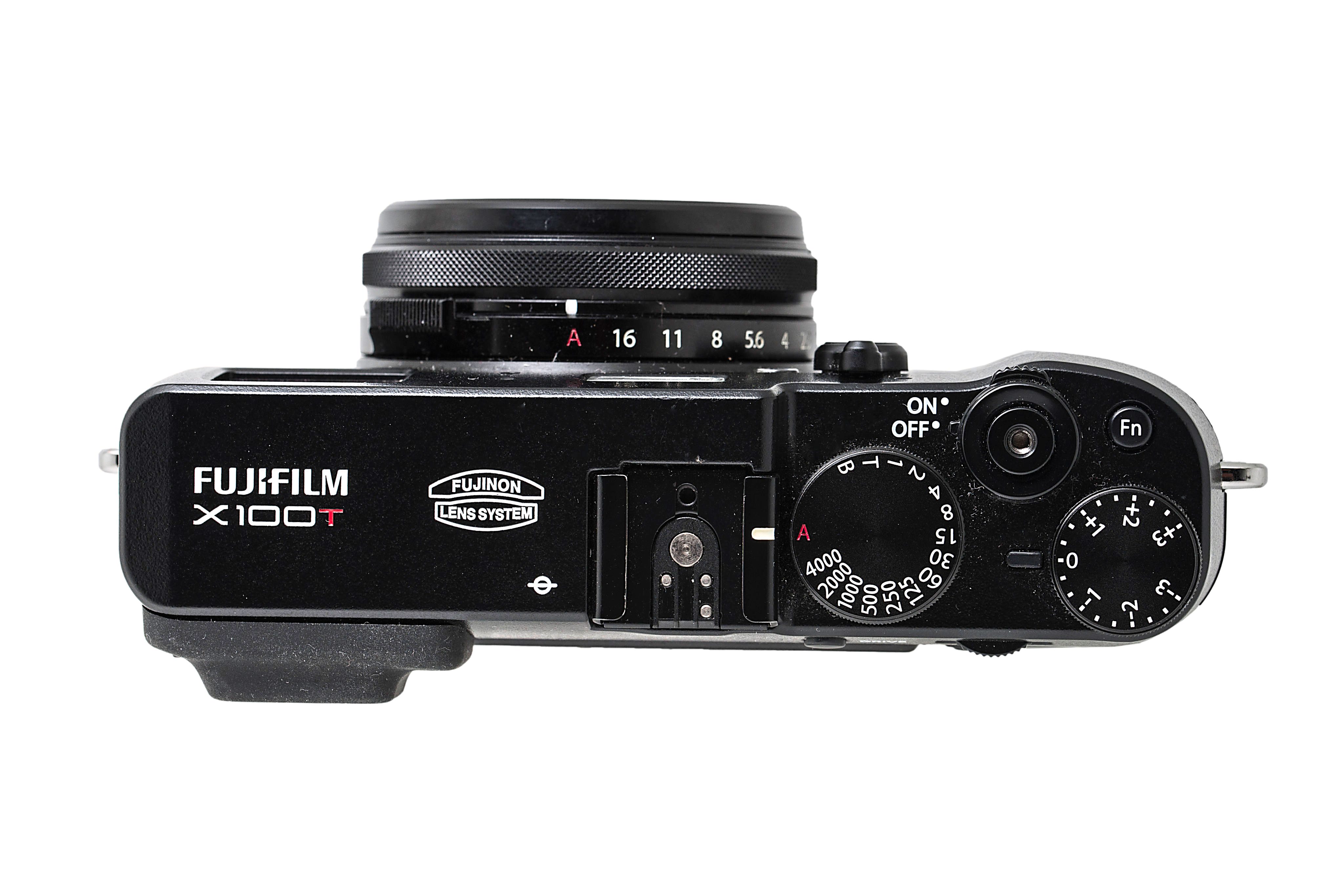 POCKETABLE: The X100T’s svelte dimensions means that you can still easily slip it into a pants or jacket pocket.

Also, as the camera is very small, you can quite easily and quietly take photos without intimidating people or disrupting events.

One very interesting new feature available when using the optical viewfinder is that you can actually overlay a tiny electronic image in the lower right hand corner to help assess focus or exposure.

However, unless you read the manual (which I am not in the habit of doing) you won’t be aware that you can do this.

It’s actually engaged from the same lever on the front of the camera used to switch between the optical viewfinder and EVF, but instead of flicking it anti-clockwise, you turn it clockwise.

Image quality of the X100T is similar to its predecessors, which means it’s pretty darned good – the company’s 16-megapixel X-Trans CMOS sensor produces detailed images with very low noise even up to ISO 3,200.

In fact, you still get perfectly usable results at ISO 6,400 where a little bit of noise is visible in the shadows, but not so much that it’s objectionable.

It’s only beyond ISO 6,400 that the noise reduction kicks in harder and the battle to reduce noise while retaining detail is lost. FAMILIAR YET DIFFERENT: The back of the Fujifilm X100T looks a lot like its predecessors but the buttons have been moved around a bit.

The X100T also comes with WiFi built-in which allows you to remotely control the camera via the Fujifilm Camera Remote app, as well as transfer photos to your smartphone or tablet.

Using the app you can control a variety of settings, from ISO and white balance to aperture and shutter.

As far as video goes, the X100T can record at up to 1080p at 60fps (frames per second) and there is a stereo microphone input.

However, Fujifilm has chosen to use a 2.5mm stereo microphone input on the X100T instead of the more common 3.5mm jack which means you probably have to get an adaptor if you want to use a microphone.

Video quality is only so-so but anyone who buys the X100T is probably more into stills and street photography rather than full-on videography as there are more versatile and cheaper cameras out there that do better video.

Fujifilm’s continual evolution of its X100 series has resulted in better and better cameras.

Every time I use one of these cameras I wonder why other makers don’t take a page out of the Fujifilm’s design book and incorporate some of the features into their own devices.

Having said that, I did find myself a little limited by the X100T’s fixed focal length lens which is locked.

Sure, you can buy a wideangle or telephoto screw-on converter for the camera, but this isn’t as convenient as having a zoom lens built in.

While I could live with only one fixed focal length lens back then, in this day and age it would be really be more logical if the company could put in a 2x zoom lens (equivalent to 35mm to 70mm zoom) in the next X100 and still retain the bright f/2.0 aperture throughout the zoom range.

Nevertheless, the X100T is a great camera if you’re into street photography and if you can afford the relatively hefty price.