Malaysia will only be represented by Khairul Anuar Mohamed in the individual event at the Tokyo Olympic Games.

PETALING JAYA: Malaysia will not be represented in archery team event at the Olympics for the first time since 2008 Beijing Games.

This comes after the trio of Khairul Anuar Mohamed, Akmal Nor Hasrin and Zarif Syahiir Zolkepeli failed to secure one of the last three tickets to Tokyo Games offered in the Final Qualification Tournament (FQT) in Paris on Sunday (June 20).

Khairul and teammates reached the quarter-finals before losing 2-6 to Ukraine.

Malaysia had earlier performed well in the qualifying stage by posting a 1,998 total to be placed seventh out of 38 countries.

They were awarded a bye into the last 16 by virtue of being the top eight ranked teams.

In the opener, Malaysia edged Mongolia 6-2 to set up a last eight clash with reigning European Championships runners-up Ukraine.

Having failed in their bid, Khairul will be the sole representative in Tokyo unless the women's squad comprising inexperienced Nur Ain Ayuni Fozi, Syaqiera Mashayikh and Nurul Azreena Fazil could spring a surprise on Monday.

Khairul sealed an individual spot after bagging a historic silver at the 2019 World Championships. 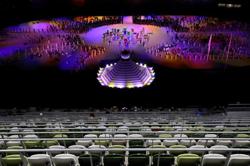