China – Malaysia engagement has not ended but … 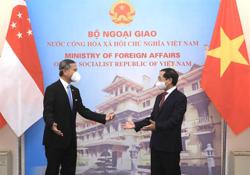 Unlike Kurt Campbell, the Indo-Pacific Affairs Coordinator of President Joe Biden, who announced last week that "US engagement with China" has ended, signifying the fraying of the Sino-US tie, Malaysia will not end its engagement. There are at least four other areas that China and Malaysia can continue to cooperate with:

C. The use of Renminbi as the unit of bilateral trade;

D. Potentially producing a Code of Conduct on South China Sea, as Foreign Minister Wang Xi of China has been hoping for, ideally, by the end of 2021.

The Ambassador of Malaysia to China, Dato Raja Nurshirwan Zainal Abidin, was spot on when he affirmed "South China Sea is but a segment of a broader bilateral relationship with China to the Chinese Television Global Network (CGTV). He took the big picture approach so that neither side is entrapped in any “pocketed” disputes. But a sovereign violation of another country's territory and air space remains an important matter.

The fact that the Foreign Minister of Malaysia Dato Seri Hishammudin Hussein has tried go more than half way to describe the bilateral relationship as a very brotherly one barely a month ago - right in front of the International media to his Foreign Minister counter-part Wang Yi in Fujian, Chiba, is display of a spirit of cordiality.

What Malaysia's practiced was nothing less than a form of "defensive diplomacy" consistent with the Asean Way, where the gentle method is backed by strong principles.

To be sure, there are rules and protocols to flying into the aerial zones of the Malaysian Maritime Zone (MMZ) of Malaysia: prior notification; advance announcement; most important of all, the request for friendly permission to enter Malaysia's air space. There are no grey zones or unknown protocols the International Civil Aviation Organization and National Air Defense Strategy. Everything is by the book. China knows the rules of engagement, as does Malaysia.

Yet, all these basic Codes of Conduct were breached, as the 16 planes continued a flight path that were just 60 nautical miles away from Sarawak.

Directly and indirectly, from the stand point of Malaysia air force, if not the people of Malaysia in whole, the MZZ were encroached in the most brazen way too.

When spotted by the Malaysian traffic control, the aircrafts were obviously informed that the Chinese have violated Malaysian air space. But there was no response from the planes at all. This behaviour seems to disrespect the sovereignty of Malaysian territories. As things stand, how this issue can be prevented in future, if not totally, is now in the hands of the Ministry of Foreign Affairs.

By extension, when any freedom of navigation (FON) at sea is conducted by other foreign powers, one could see Chinese ships warning US vessels, in the main, that they have violated "Chinese territories. China ostensibly wants others to respect it.

As an ex-colony of the British Empire, Malaysia understands all too well the importance of not to be “humiliated” by foreign powers, or told what to do; not unlike how China itself had often referred to its prior bullying as the "Century of Humiliation."

Instead, the 16 aircraft formation, headed straight towards Sarawak waters. Consequently, the RMAF then scrambled Hawk 208 fighter jets from the 6th Squadron of the Labuan Air Base to intercept the foreign planes.

Granted China's stand-off with the Philippines at West Palawan Sea last month, is China now testing the tenacity of Malaysia to stand our own ground? Do not test Malaysia. Our foreign and defense policy are all by universal standards of standards drawn from the rule of law.

An aerial violation will compromise the spirit of Treaty of Amity and Cooperation (TAC), on which Asean deeply believes in, of which all 12 Dialogue Partners of Asean are a signatory too, including China. No Dialogue Partners of Asean have behaved in such a way. TAC, which has been around since the Bali Summit of 1976, affirms the central value the "war shall not be the basis of foreign policy”.

Indeed, it was just last year, it was reported by the Malaysian Department of Auditing, that the Chinese Coast Guard and navy ships had intruded into Malaysian waters 89 times between 2016 and 2019. That's excluding the activities of Chinese illegal fishing fleets in Malaysia's Exclusive Economic Zone (EEZ) and Chinese Coast Guards that was recorded to have been trailing the activities of West Capella, the vessel of Petronas, in 2020.

Here, it should further be added at a time when Malaysia has just identified 89 cases of the B 167 dormant variant --- now renamed Delta variant by the World Health Organization (WHO), what was also otherwise known as the Indian strain of the Sars Cov II, the collective anxiety of Malaysia is at its most delicate point. On a per capita basis, Malaysia has registered more cases than India; granted that Malaysia's population is merely 32 million people. Thus, Malaysia may feel on the edge. But as a sovereign nation-state, the leaders of this country does not want any downward spiral of any otherwise healthy bilateral relationship, including if not especially China, since we live in the same neighborhood.

Malaysia, as shown by its exemplary behaviour towards Indonesia in particular, which Indonesia reciprocates many times over, has never resorted to any provocative action, either at sea or in the air. Neither has Indonesia under the new order.

Even if both countries have had minor run-ins on the Sipadan Island, the dispute was referred to the International Court of Justice in the Hague (ICJ). On Pulau Batu Putih, which was also referred to the ICJ, Malaysia conceded it to Singapore.

China should not test the patience on all countries in Asia that are smaller than it. The "Asean Outlook on Indo-Pacific", which was concluded in 2019 at the Asean Leaders Summit in Bangkok, is a unanimously agreed document that did not signify Asean's endorsement of the Quadrilateral Strategic Dialogue or the Quad, when the latter on the virtual summit on March 24, 2021.

Hence, Malaysians' patience can and will run thin, if China continues to allow its coast guards and illegal fishing fleets to come within miles of Malaysia.

If anything, the 16 planes that flew in a single formation is almost akin to poking a stick into the eye of the Malaysians. Better fences do build better neighbours. The same goes with respecting each other's borders.

Indeed, the view of the Chinese ambassador to Malaysia Ouyang Yujing, that the flights were "mere military exercises," do not do justice at all. One must hasten to add, is totally improper. Can Malaysia send a squadron of 16 aircrafts to the MMZ of the Hainan Island? The answer is obviously no. Hence, in international relations, what is good for the goose must be good for the gander. In Confucius terms: "Do not do to others what you do not want others to do to you."

Dr Rais Hussin is President and CEO of EMIR Research, a think tank focused on strategic policy recommendations based on rigorous research

Let’s focus on fighting this pandemic together
Covid-19 vaccine: Should Malaysia adopt the one-dose policy?
Aren’t veterinarians considered frontliners too?
Single-dose CanSino a pragmatic approach in vaccination for remote areas
Vaccination for people with disabilities
Hiring the right type of teacher
We’re all in the same boat
University rankings and underemployment are illusions
Employers are responsible for safety of delivery riders
Ending the threat of Covid-19: Full cooperation integral to government’s solution-oriented approach