EPIDEMIOLOGISTS attempt to model quantitatively the course of an infectious outbreak by plotting the number of cases over time in a curve-fitting exercise whose shape reflects parameter values like the reproductive number (average number of secondary infections produced by a typical existing infection) and incubation period (duration between exposure to an infectious organism and the emergence of noticeable symptoms).

Such exercises have been undertaken by researchers at the University of Hong Kong, Imperial College (London) and National University of Singapore, among others.

It was on the basis of such fitted epidemic curves that Dr Bruce Aylward, team leader for the WHO-China Joint Mission on Coronavirus (Feb 16 to Feb 24,2020) assessed that the Chinese government may have averted hundreds of thousands of additional infected cases through their extraordinarily robust containment efforts in Wuhan, Hubei, and other cities and provinces.

The mainstays of these containment efforts were:

> Contact tracing and quarantine of close contacts who were untested or who tested negative; and

> Massive social distancing in various forms, all carried out in unavoidably disruptive ways but which nonetheless allowed for the basic living essentials and needed care, by and large, to be delivered.

Malaysia, however, has specific demographic characteristics that are not easily modelled upon such simulations of epidemic dynamics, most specifically the large pools of undocumented migrant workers (easily a million in the Klang Valley) who have strong incentives to avoid contact with government agencies, making contact tracing more difficult in an outbreak situation.

Nonetheless, most fatalities and severely ill cases that might occur among undocumented migrants presumably would come to attention at some point, but this would be much delayed, which greatly complicates efforts at containment and mitigation, not to mention treatment.

Citizens’ Health Initiative (CHI) knows that our Health Ministry is aware of these potential spillover scenarios through previous discussions with Dr Chong Chee Kheong (formerly director of disease control and currently deputy director-general for public health) as well as via recent communications with senior officers of the WHO and UNU-International Institute for Global Health in Kuala Lumpur.

What is less clear though is the proactive measures and contingency plans the Health Ministry may have for coping with such scenarios.

Are there, for example, initiatives to engage more closely with those channels of healthcare access that undocumented migrants resort to when in need of care, like voluntary clinics such as those run by Tzu Chi Foundation, Pertiwi Soup Kitchen, Teddy Mobile Clinic and Global Doctors Hospital Mont Kiara (assuming they also cater to unsuccessful asylum applicants and undocumented migrant workers in addition to refugees)?

These laudable endeavours operate as de facto “safe(r) spaces” which could supplement the Health Ministry’s efforts in outreach and communication with marginalised communities, especially those that need some assurance of sanctuary when accessing needed care.

Beyond that, civil society organisations, migrant networks and communities, UN agencies and indeed embassies of the labour-sending countries could assess the information and health communication needs of the respective migrant communities, and translate and disseminate useful, actionable information for individual as well as community coping responses.

How might we know if the Covid-19 outbreak in Malaysia has spilled over into the undocumented migrant population?

At the moment, the Health Ministry is relying on its existing sentinel surveillance for influenza-like illnesses (ILI) and Sari (severe acute respiratory infections) to also detect sporadic cases of SARS-CoV-2 positives as a red flag for community viral transmission with no traceable contact history. This could be how infected undocumented migrants might directly or indirectly come to attention.

Somewhat reassuringly, the sentinel surveillance so far has not detected any sporadic cases. The reported first case of a presumed sporadic case has now turned out to have a contact history traceable to a known infected case, as reported in “Sporadic no more: Source of Covid-19 infection traced to religious event” (The Star, March 12; online at https://bit.ly/2wTY46a).

We should treat this as a wake-up call for the urgency of an “all of government” effort led by Prime Minister Tan Sri Muhyiddin Yassin to respond proactively to an escalating emergency.

We should not need the ijtimak tabligh incident at the Seri Petaling Mosque – “Covid-19: Health Minister urges those at mosque gathering to come in for screening” (The Star, March 12; online at https://bit.ly/2vRsSVj) – to drive home the urgency for proactive measures by a health minister or director-general who might have felt constrained in proposing bans on large religious gatherings and sporting events, school and university closures when necessary, and policy changes pertaining to immigration and home affairs, income maintenance/employment security, and etc.

The PM needs to step up and take charge with the overarching authority of his office.

Citizens’ Health Initiative CHI is an informal grouping of individuals seeking to promote citizen involvement in healthcare reforms and health policy in Malaysia. 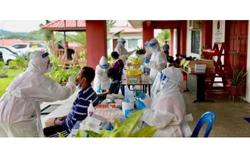 Health Ministry: Asymptomatic Covid-19 patients may be treated at home if quarantine centres are full