AFTER 20 years of writing, reflecting on and observing politics in Malaysia, I now know that the politics of parties, the acts of civil institutions and the values of university academics can never change Malaysia. Why? I think most don’t want to. There is no will because there is no sense that anything is wrong. This is sad but it is the truest conclusion I can give to Malaysians.

This year, amid the raging Covid-19 pandemic, I thought hard about what other ways there could be to bring about change and I came up with some ideas I wrote about in the media and published in books.

One of the newest ways is the idea of Cerita Rakyat Malaysia, which is a collection of stories from Malaysians intended to share our lives, aspirations, meanings and interactions with others as we move towards becoming one Malaysian Family.

Although Prime Minister Datuk Seri Ismail Sabri Yaakob kicked off the idea of a Malaysian Family, there hasn’t been enough time to judge whether his actions will match his speech. But we don’t need to wait for him – as I have always said, change must come from each and every one of us.

Stop depending on and complaining about politicians. Get off your butt and do something that is easy, achievable and meaningful.

Thus, at a meeting with my friend Patricia who had started a Rakan Rukun Negara group with a series of forums to appreciate and bring back Malaysian values of the past, I said, would it not be fantastic if we can share many stories about our lives? Imagine stories about real life in the modern context of Malaysia from Chinese, Indians, Malays, Kadazans, Dayaks, Orang Asli, Muruts, Bajaus, Eurasians and many others in a single blog with accompanying narration videos, pictures and events. Only in this way can real change happen in this country.

If you do not know the greetings of the Kadazan people, forget lah about being a true Malaysian. Years from now, when our children can appreciate this nation through the stories they read in this blog for their school projects and assignments, then and only then will this country’s destructive politics and its inaccurate historical narratives change for the better.

And so, in this column today, I would like to launch the Cerita Rakyat Malaysia Project that can be accessed at ceritarakyatproject.com.

I will add a story to this blog about my childhood days, Enid Blyton and a Chinese boy I will call Jee that I share here to encourage you to write your own stories for the project.

When I was in Standard Six at St Marks Primary in Butterworth, Penang, I made friends with a Chinese boy in my class I called Jee. Jee was a bit bigger than me – I was at that time a petite, scrawny Malay boy whom bullies found easy to target. Though Jee was bigger, he acted and spoke well like a girl!

In Penang Malay dialect, we would call a boy like that “darai”. He was also bullied by the other boys, who would jeer at his girlish way of speaking but none dared to pick a fight with him because he could hand out a good thrashing if he wanted to.

One day, he saw me reading a Malay story book titled Misteri Desa Bunyi Loceng. He asked me about it and I said it was my first novel and that my mother bought it for me as a reward for my good grades.

He then told me that it was a translation and showed me where there was a line that read “Terjemahan dari buku The Ring O’ Bells Mystery oleh Enid Blyton”. That was the first time I heard of the author who would have the biggest impact on my life as a child and even through my adult years dealing with social, religious and political issues.

Jee offered to lend me his English version the next day. After I read his book, I was hooked for life on the original English version of over 100 titles about Christian boys and girls living in England and having adventures.

As we lived in Butterworth, it was only a short ferry ride to Penang Island. Jee told me that Penang is heaven for storybooks like the ones we were reading and he asked me to come along with him to check them out.

However, my father had forbidden me from leaving the compound of the police barracks where we lived so I just gave Jee some of the money I had saved up to buy the books for me.

Our one-year friendship was filled with him buying books for me and us talking about the stories during recess and after school while waiting for our rides home.

One day, I asked my father to take me along to Penang on one of his security trips. So one afternoon, my father picked me up in a police car while he escorted a Land Rover full of convicts to be transferred to Jerejak Island Prison Camp. I sat in the back with two policemen armed with a shotgun and a Sten machine gun.

When we reached Penang, I went alone to the shops and, lo and behold, I found two bookshops on a single street and spent two joyful hours buying, brooding over and reading some of the comics there.

When I left for St Marks Secondary, Jee went to another school. I am most grateful to him for introducing me to the English books of Enid Blyton that became close companions in my teen years, and later on, when I tussled with ideas about Malaysia, Islam in the modern world, and global sociopolitical and religious conflicts, it was Blyton’s books that had helped form the values that I had as an adult, a citizen and as a human being. Thanks so much, Jee!

So, Malaysians, please visit the Cerita Rakyat Project at ceritarakyat project.com. Add your stories so we can make the Malaysian Family a true vision rather than just politicians’ lip service. We can and we should. 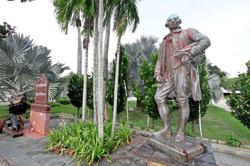