Rivals: Azmin and Hamzah’s battle to be nominated Bersatu’s candidate for the deputy prime minister’s post could have repercussions for other party members. — Filepics

SIMMERING in the background in Parti Pribumi Bersatu Malaysia (Bersatu) is the fight between Team Azmin and Team Hamzah over the party’s choice of candidate for deputy prime minister (DPM).

The rivalry has been heating up since September 2020 when both men jockeyed to place their loyalists as Bersatu candidates in the Sabah state polls.

According to him, the question whether to remove the council member is preventing the party from moving on.

“Everyone knows that the politician is associated with Parti Bangsa Malaysia (PBM). This MP’s original intention was to leave Bersatu and form PBM, and for it to be part of Perikatan Nasional,” he said.

Most of the leaders in PBM are associated with the Bersatu Supreme Council member that Azmin wants removed.

According to the insider, the council member – who is a Cabinet minister – upset Azmin over the plans to leave Bersatu and form PBM as it would mean that Azmin would lose an ally, which could cost him the DPM post.

“There was a big fight between the two, and as a result, Azmin is actively trying to get his former ally kicked out from Bersatu and the Cabinet,” said the insider.

“Bersatu has been dilly-dallying over whether to remove the Supreme Council member as it has implications for the Cabinet post and the number of MPs the party has [32 currently]. So the party has avoided making any big decisions for the last two months.”

Two months ago, instead of taking decisive action, the Supreme Council decided to remove the minister from Bersatu’s WhatsApp group chat – a move the insider called “childish”.

“Someone complained that the party leadership couldn’t have secret conversations in its Whats-App group because a politician ‘working for the enemy’ was in the group,” the insider said.

During Tuesday’s Supreme Council meeting, Team Azmin pushed for the politician to be removed as a council member, party member and minister (though, strictly speaking, the last position is decided by the Prime Minister). Azmin did not attend the meeting.

“Azmin’s camp said the party should remove the politician and not worry about repercussions. And that Bersatu should be stern, clear and firm about loyalty to the party,” said the insider.

However, Team Hamzah proposed that PBM – whose leader has met with Hamzah to seek assistance in joining Perikatan – should be accepted into the coalition.

“Hamzah’s camp said hang on and let’s wait as PBM might be helpful to us, and we don’t want to be too hasty about this,” the insider said.

Some at the council meeting thought that if the suspect politician was to join PBM and the party then applied to be part of Perikatan, Bersatu should not set the precedent of allowing someone to leave it, form a new party, then join its coalition with the new party.

The Supreme Council made a decision on Tuesday night about the politician’s fate, the insider said, but Team Hamzah is stalling to keep it from being implemented (so it’s not much use revealing it yet).

“Hamzah sees PBM as a potential ally in Perikatan that would help him rise and be DPM,” said the insider.

But is there a guarantee that Bersatu would get the DPM post in the first place?

According to the insider, “This was the agreement between Muhyiddin and Ismail Sabri, but the promise has not been delivered yet.”

He continued: “A bigger proportion of Bersatu Supreme Council members believe that Azmin shouldn’t be DPM, it should be Hamzah. When Tan Sri Muhyiddin nominated Azmin, he did not consult the council.”

The elephant in the Bersatu room is the fight between two prominent politicians with the deer – that Bersatu minister – stuck in the middle. 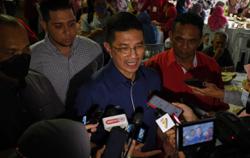