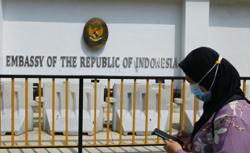 JOHOR BARU: Malaysians looking for Indonesian maids have been told to lodge a report with the Indonesian Consulate General if their agents charge more than RM15,000 per worker.

Its Johor Baru consul general Sigit S. Widoyanto said they were receiving complaints about agents charging fees exceeding the limit that was set in the memorandum of understanding (MOU) signed between the two countries last year.

“Based on the MOU, the maximum limit charged by agents to get domestic workers is no more than RM15,000. But there are complaints that agents charge up to RM20,000 or RM30,000.

Sigit explained that the MOU signed in April last year was aimed at providing protection to both sides, namely the foreign workers and employers.

“Since this MOU was signed, it is estimated that around 1,000 applications for Indonesian domestic workers have been made so far. The number is expected to increase based on current demand.”

He also said that the consulate general office urged Malaysian employers as well as Indonesians who do not have a valid work permit in this country to take advantage of the Labour Recalibration Programme 2.0 (RTK 2.0) that would start this Friday.

Sigit said there could still be employers in this country who offered jobs to Indonesians illegally.

Similarly, he said there were Indonesians who entered Malaysia on tourist visas but they do not return home after the 30-day period ends.

Under the RTK 2.0 programme implemented by the Malaysian government, he said employers and Indonesians without valid work permits should apply directly to obtain the necessary documents.

"This step actually provides a win-win situation for both parties involved, so we at the consulate general welcome the RTK 2.0 program implemented by the Malaysian government," he said.

Early this month, Home Minister Datuk Seri Saifuddin Nasution Ismail said the government agreed to extend the RTK 2.0, where illegal foreign workers in the country are given the option to return home or continue working by registering with a certain fee.

Bernama reported that as of Dec 31 last year, 418,649 foreign workers had registered under the RTK, and 295,425 others were sent back to their home countries.

Under RTK 2.0, illegal foreign workers in the country are given the option to return home or continue working here by registering with a certain fee.