Top spot: Liew says she is honoured by the win. — Photo courtesy of Academy of Sciences Malaysia

According to the statement, Liew took home RM4,000 and a certificate of achievement, while the runner-up, Lee Hui Jing from Universiti Tenaga Nasional (Uniten), won RM3,000.

The Best Team Award went to the group, including Nivaarani and Lee, while the best presenter was awarded to Ng Wen Cai from Monash University Malaysia.

“The YSN-ASM Chrysalis Award is specifically designed to strengthen and nurture the talent and capability of young researchers so it can empower them in line with the development trajectory of Malaysia’s Science, Technology, and Innovation (STI).

“Throughout the programme, 15 finalists were assessed individually on, among other things, their demonstration of knowledge, enthusiasm, leadership, creativity, teamwork and presentation skills,” said the statement. 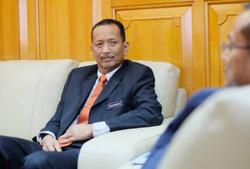