No celebrations, no convoys to mark Anwar's swearing in as PM, DAP sec-gen tells party leaders

PETALING JAYA: DAP leaders at all levels must not organise any form of celebration or convoy to mark the appointment of Datuk Seri Anwar Ibrahim as Malaysia's tenth Prime Minister, says Anthony Loke Siew Fook.

The DAP secretary-general said this in a statement released on Thursday (Nov 24) after the announcement by Istana Negara that Pakatan Harapan chairman and PKR president Anwar would be sworn in as the next Prime Minister.

"DAP has instructed all levels of the party leadership to not organise any form of celebrations or vehicle convoys.

"We urge all parties to stay calm and respect the decision of the King and the Council of Malay Rulers.

"We must unite and cooperate in assisting the Prime Minister to guide this country out of the current issue we are facing," said Loke, who also said he was on his way to Istana Negara for Anwar's swearing-in ceremony. 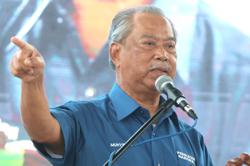