SEREMBAN: Police have detained a 33-year-old Vietnamese woman in connection with an alleged murder at a Taman Bukit Delima apartment near here.

Seremban OCPD Asst Comm Nanda Maarof said the deceased, a man in his 50s, had a stab wound on the right side of his abdomen.

He said a police team found the man's lifeless body in the unit at around 9.30pm Monday (Nov 21).

"We received a call from a security guard at the apartment block about a stabbing incident there and a team was sent to investigate.

"When they arrived at the unit, my men found the victim sprawled in the living room," he said in a statement on Tuesday (Nov 22).

ACP Nanda said his men also found the woman inside the apartment.

"Sho looked shaken and was in tears," he said, adding that checks showed the woman had entered the country in June.

Police also found a knife which was believed to have been used in the incident.

He said neighbours told police that the duo had an argument minutes before the stabbing.

ACP Nanda said the case was being probed under Section 302 of the Penal Code for murder and appealed to witnesses to come forward and help with the investigation. 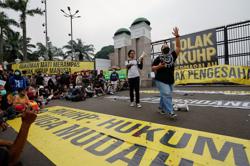