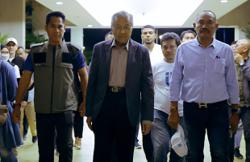 Perikatan Nasional's Datuk Mohd Suhaimi Abdullah emerged the winner of the parliamentary seat after receiving 25,463 votes for a majority of 13,518.

The result means Dr Mahathir has suffered the second defeat in a general election throughout his long political career.

The first time he lost was in 1969 to former PAS president Yusuf Rawa in the then Kota Setar parliamentary seat.