GE15: Ku Li leaves it to Umno to decide on Gua Musang candidacy 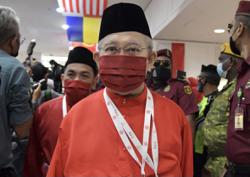 GUA MUSANG: Tengku Razaleigh Hamzah (pic) is leaving it to the Umno leadership to decide on his candidacy to defend the Gua Musang parliamentary seat in the 15th General Election (GE15).

Tengku Razaleigh, 85, who is also Gua Musang Umno chief, said he would oblige if requested by the party to do so.

"I will leave it to the party (to decide) and in Gua Musang, they (Umno members) never allow me to retire,” he told reporters after the Gua Musang Umno divisional delegates meeting at Balai Rakyat Bukit Cekati here Saturday (Oct 15).

At the meeting, Umno Gua Musang unanimously supported the motion to retain Tengku Razaleigh, popularly known as “Ku Li”, as the candidate for the Gua Musang parliamentary seat in GE15.

“Even the Orang Asli community, they don’t want anybody else as the candidate for the Gua Musang MP.

"They want me and the party's (Gua Musang Umno) division secretary (Nenggiri assemblyman Ab Aziz Yusoff) said as long as I can perform, I have to offer myself. What can I say, I follow the party’s instruction,” he added.

Tengku Razaleigh holds the record as the longest-serving elected representative in the country.

In 1974, he contested and won the Ulu Kelantan parliamentary seat, which was eventually renamed Gua Musang, and remained its elected representative until today. - Bernama