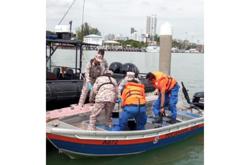 SEPANG: Plumes of smoke and the blaring of sirens filled the air as pandemonium momentarily broke out at the Kuala Lumpur International Airport 2 (KLIA2) terminal due to a “malfunctioning plane”.

What followed was the sight of the Airport Fire and Rescue Service (AFRS) Ultra Large Foam Tender trucks rushing to an airstrip here yesterday to rescue the “victims” involved in the incident.

After putting out the flames, members of the AFRS and the Fire and Rescue Department then raced straight into ground-zero to usher the victims to safety while also providing immediate emergency assistance to those unable to move.

Several critically wounded victims were also seen being stretchered out of the “plane” by the first-responders to a makeshift tent nearby whilst waiting for ambulances to arrive.

Those who suffered light injuries were then brought to a Survivor Rescue Centre in the terminal, while those who were “critically wounded” were rushed to the Air Disaster Unit nearby.

The scenes at the Air Disaster Unit were equally hectic, as medical personnel from the Health Ministry hurried to treat those critically wounded, with ambulances being readied to send them to the hospital.

In reality, the “tragedy” described above was actually a full-scale airport emergency exercise conducted by Malaysia Airports Holdings Bhd (MAHB) as part of efforts to reinforce the airport’s readiness and resilience in managing any crisis or emergency situations.

Apart from the AFRS, the simulation also saw participation from the Fire and Rescue Department, police, and Health Ministry, among others.

Malaysia Airports managing director Datuk Iskandar Mizal Mahmood said this exercise was a manifestation of their commitment towards safeguarding national interest and infrastructure.

“Constant communication and shared strategies among all stakeholders are vital in improving our readiness when responding to crises or any safety and security threats.

“We are fortunate to have garnered invaluable support and participation from more than 770 personnel from 33 major government and private agencies for this (exercise),” he said.