The former defence minister said no action has been taken so far after the Cabinet agreed to declassify the investigation report by the Investigating Committee on Procurement, Governance and Finance (JKSTUPKK) on the procurement of the LCS and the forensic audit report.

He added that the JKSTUPKK investigation covered nine ministries, totalling a government budget of RM47bil.

“According to JKSTUPKK, among the significant weaknesses are poor planning, non-comprehensive due diligence and weakness of contract clauses,” said Mohamad, also known as Mat Sabu, in a statement.

He said other significant weaknesses were contract enforcement, failure to follow guidelines, prototype purchase, procurement by direct negotiation which is less transparent, and lack of monitoring and intervention of members of the administration in the procurement process.

On Aug 10, the Prime Minister announced that the government agreed to declassify documents pertaining to investigations into the LCS scandal.

However, he said, the government would seek the advice of the Attorney General and Auditor-General before doing so.

The LCS controversy gained momentum over the past few days after the Public Accounts Committee (PAC) revealed that none of the ships have been completed so far, although five should have been delivered by this month. 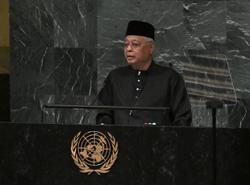