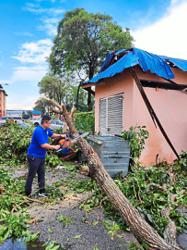 JOHOR BARU: Several houses and flats in the Masai area were affected by ongoing heavy downpour and strong winds that blew away their roofs.

"The rain started at around 1pm Friday (Aug 12), where strong winds also uprooted trees and damaged many cars in the process.

"The roofs of around 10 flat blocks were blown away, leaving around 50 families stranded and unable to return home due to the damaged infrastructure.

Several flat units and houses in the Masai area were affected by a heavy downpour and strong winds that blew away their roofs.

"I am also working with Pasir Gudang MCA division chief Tan Tuan Peng to arrange for buses to ferry the victims to a nearby multi-purpose to seek temporary shelter," she said.

Chan said she has also received complaints from residents in Bandar Seri Alam regarding trees being uprooted by strong winds.

She added that she was also working with MBJB to mobilise personnel to the affected areas to assist with clean-ups.

According to the Meteorological Department, thunderstorms were forecasted in areas such as Johor Baru, Kota Tinggi, Kulai, Pontian, Mersing and Kluang in Johor until 6pm Friday.

The department also warned about rainfall of more than 20mm per hour for more than an hour during the period.