Mohamad, who is also Umno deputy president, said the PBM's application will only be accepted if there was a consensus among its four component parties.

"The four (component parties) will discuss and deliberate on this and only if there is a consensus will PBM be made a member.

"If one doesn't agree, then it will not happen," he said when met at the sidelines of the state assembly sitting.

Barisan is currently made up of Umno, MCA, MIC and Parti Bersatu Rakyat Sabah (PBRS).

On Aug 3, Plantation Industries and Commodities Minister Datuk Zuraida Kamaruddin was quoted as saying that PBM had submitted its application to join Barisan three weeks ago.

Zuraida, who is PBM president-designate, had quit Parti Pribumi Bersatu Malaysia in May to join PBM.

Mohamad said Zuraida met him at his office last month to state the party’s intention to do so.

He then told her to write officially to Barisan chairman Datuk Seri Dr Ahmad Zahid Hamidi.

"All I told her was that there is no one individual or party in Barisan that can decide on this.

"There has to be a consensus," he said.

Mohamad said Barisan leaders would look at all aspects before deciding on PBM's application as it did not wish to offend other parties which had applied to join the coalition.

"The difference with PBM is that it has elected representatives.

"We will discuss this in detail before deciding as we do not want to hurt the feelings of our friends who are not full members," he said referring to Friends of BN, which comprises Makkal Sakti, Indian Progressive Front, Malaysian Indian Muslim Congress, Parti Cinta Malaysia, Malaysian Indian United Party and Parti Punjabi Malaysia.

Mohamad said Barisan valued the support of all these parties although they were not full members of the coalition.

"Some have been our friends some 30 years ago and we truly appreciate them.

"We have asked them to become Friends of BN first as they do not have elected representatives," he said, adding that the Barisan leadership was considering allowing candidates from these parties to contest in suitable seats in the coming general election.

To another question, Mohamad said it was crucial for Barisan to get all the support it could if it wished to wrest power in the next polls.

"Like I said, there has to be a consensus from all members in the coalition before a new member can be added.

"That is why it is sometimes a bit difficult (to decide to accept an application) as all component parties have their own interests.

"But the fact is that we are going to need all the support we can to do well," he added. 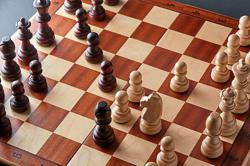 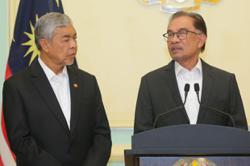