The Ipoh Mayor said the council was currently waiting for the greenlight approval from the local authorities at the scene.

"This is part of our humanitarian mission to help those affected by the flood in Baling.

"We already have everything prepared, including necessary tools for cleaning. Once we get our greenlight, we will bring out volunteers straight to the affected area," he told reporters at the city council headquarters on Thursday (July 8).

Rumaizi said although the mission was not in Ipoh, it was the city council’s responsibility to help those in need.

"We are all related to one another, it doesn't matter if they are from Ipoh or from Kedah, MBI will come and help," he said.

On July 4, the flash flood and water surge phenomenon at Kampung Iboi in Baling claimed the lives of three members of a family while seven houses were swept away by strong currents.

"We often received complaints from the public about garbage water leaking from some of our current garbage trucks, which the new trucks can solve.

"The new trucks are equipped with European standards and are of better quality even though they are cheaper than our other trucks.

"Although we do have 19 other similar trucks, most of them have various issues and some cannot work properly any more," he said, adding that the city council will also add small garbage trucks to help provide a better garbage-collecting service for the public.

Rumaizi added that the new trucks would be able to handle 10 tonnes of garbage per trip.

"They are also equipped with a GPS system where the city council will be able to track its routes as well as collecting data for its fuel-usage. 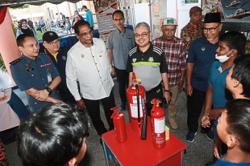